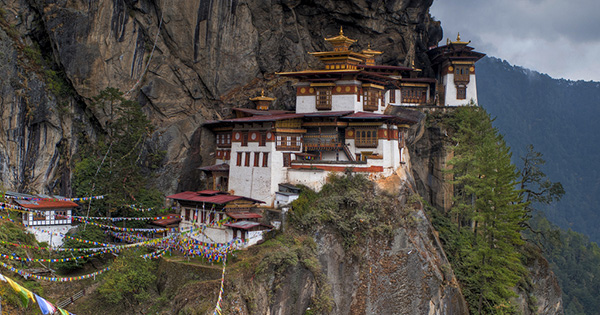 In a world that’s full of natural resource degradation, Bhutan’s  natural bounties makes it something special, and certainly one of the best travel destinations in the world. This small Himalayan kingdom is one of the world’s last remaining Shangri-La’s, and this is because it has combated the ill-effects of rampant urbanization and managed to avoid the pitfalls of unchecked tourism. Yes, Bhutan is bountiful in natural beauty and rich in culture and tradition

It is no doubt, a Shangri-La and thus, one of the best destinations in Asia, and here are the five reasons why your Bhutan travel will make for a great vacation.

1. Exclusivity: Bhutan, which calls itself Druk Yul (Land of the Thunder Dragon), is still a partly secluded state, and it has earned a reputation as an exclusive destination. Stringent travel requirements mean that the country is not likely to be overrun with tourists of the cheaper kind. The Bhutanese government has set minimum selling prices for tourist packages which have to be paid prior to arrival.  Tourists can book holiday packages through both international and local tour operators. The high season (Feb-May and Aug-Dec) tariff is US$ 200 per person per night while the low season (January, June, July) tariff is US$165 per person per night halt. Additionally, individual tourists and smaller groups (less than three) have to pay a surcharge over and above the minimum daily rates. For single individuals, this comes to US$ 40 per night while for a couple it is US$ 30 per person per night. Obviously, tourists looking for a cheap vacation are left stranded as far as Bhutan travel is concerned. On the other hand, for those lucky enough to travel to Bhutan, this means that they are among the select few to visit the Land of the Thunder Dragon, something worth preening your feathers about—a good enough reason for making Bhutan one of the best destinations in the world for a vacation.

2. Pristine surroundings: The exclusivity of Bhutan tourism has resulted in keeping intact the pristine nature of its surroundings. Still relatively unknown to most of the world, this charming Himalayan kingdom remains peacefully nestled in the eastern Himalayas amidst verdant forests and lush green valleys. Even when first landing at the airport in Paro, you will already have observed the thick forests and fertile fields with isolated farms and tiny hamlets strewn all over the countryside. Bhutan has mild climate with abundant rainfall, especially during the monsoon., and this has produced an alpine type of vegetation with forests of oak, cypress, juniper, pine, and fir. If you’re looking for some interesting flora and fauna, then you must visit the Gangtey Valley, a designated conservation area, and the Black Mountains National Park, which is where a large flock of black-necked cranes winter every year. In addition to the cranes, there are also muntjacks (barking deer), wild boar, sambars, Himalayan black bears, leopards, and black foxes in the valley and surrounding hills. The national animal is the endangered species the Takin. It has a plump, bovine-like body covered with dense long yellow to brown hair, and short stocky legs supported by two large two toed hooves and strong claws. The large head is made distinctive by the large arched “Roman” nose; a strange looking animal indeed! For nature lovers, especially, Bhutan is undoubtedly one of the best destinations in the world for a vacation.

3. Sights aplenty: Nearby Paro are the ruins of Drugyal Dzong, a historically significant site, because it was from this fortress that the Bhutanese forces repelled many Tibetan invasions in years gone by. It offers a magnificent vista of Mount Chomolhari, “Mountain of Goddess” (7,329 m). A short distance south of the road is Kyichu Lhakhang. This temple is said to be one of the 12 great geomantric temples ordered built by King Songtsen Gampo of Tibet in the 7th century. Thimphu, a two-hour drive away from Paro, lies sprawled up a hillside on the west bank of the Thimphu River. From Thimphu, the three-hour drive to Punakha and Wangdue crosses the Dochu-la (3,150 m), offering a great view of the eastern Himalayas. Wangdue Phodrang Dzong, perched on a spur at the confluence of two rivers, commands an impressive view, while Punakha Dzong is the winter residence of Bhutan’s spiritual leader, the Head Abbot. The Bumthang region, encompassing four major valleys—Choskhor, Tang, Ura, and Chhume—has quite a large number of monasteries, and most of them , including some dzongs, are in the large Choskhor valley, commonly referred to as Bumthang Valley. Taktsang (Tiger’s Nest) is the most famous of all Bhutanese monasteries. It is perched on the side of a cliff 900 m above the floor of the Paro valley. All these sights make for another good reason why Bhutan is one of the best destinations in the world for tourists.

4. Unique Identity: The architecture of Bhutan is peculiar to the country with each dzong, temple, and monastery a unique creation.  Their national dress is another aspect that gives them an identity that is singularly Bhutanese. Men wear a knee-length dress known as the ‘gho’. It is robe-like and tied at the waist with a ‘kera’ (belt made of cloth). The ladies wear an ankle-length dress called the ‘kira’. It is is clipped at one shoulder and tied at the waist, and beneath it is worn a long-sleeved blouse called the ‘toego’. Archery is the favorite sport of the Bhutanese. Indeed, Bhutanese identity is easily distinguishable, and this makes the country a still more interesting destination; one that can claim to be among the world’s top vacation spots.

5. Diversity: Tshanglas, Ngalops, and Lhotshampas are the major communities of the country’s about 7 million population. Bumthaps, Khengpas, and Mangdeps (of central Bhutan), Monpas (of Wangdue Phodrang), Brokpas and Bramis (of eastern Bhutan), Kurtoeps (of Lhuentse), and Doyas (of Samtse) make up the rest. The Tshanglas (a.k.a Sharchops) live in eastern Bhutan and are considered to be aborigines. Their womenfolk are reputed for weaving fine clothes of silk and raw silk. The Ngalops, famous for their unique dances, live in the six regions of western Bhutan. The Lhotshampas, most of who migrated from Nepal, live in the southern foothills. The Khengpas are skilled bamboo and cane craftsmen. The Brokpas and the Bramis, who live at higher altitudes in two villages of eastern Bhutan, Merak and Sakteng, are also skilled in cane and bamboo craft. The Layaps, too, live at high altitudes in the extreme north, rearing yak and sheep.

Bhutan, may be a small nation, but it does have a lot of diversity. This, too, is another reason why you should travel to Bhutan for a vacation.