Thirty kilometers as the crow flies north from Kathmandu is a Tamang village called Gatling in Langtang, Reaching there begins with a day’s bus ride over a distance of 130 km from the capital to Syabrubesi from where you start trekking. The trail is narrow and climbs up quite steeply. At around 2,300 m, you get your first views of the Ganesh Himal, Langtang Himal, and the Gosanikunda range, along with the Kerung range in Tibet. Accompanied by lovely scenery, the trail meanders on in a flat line to Gatlang.

Gatlang offers you an impressive view of Langtang II (6,561 m) and Langtang Lirung (7,246 m); the view all the more spectacular as the sun sets over the distant mountain peaks. The stunning views are no doubt fitting rewards for any trekker, but there is more to the region than just that. Gatlang is a village where you get to experience life in all its serene simplicity, a far cry from the hustle and bustle of city life that you are probably used to. You are assured of a warm welcome from the friendly Tamang people in the village; you are also assured of comfortable lodgings at one facility or the other, be it a homestay, a community lodge, or a private boarding house. 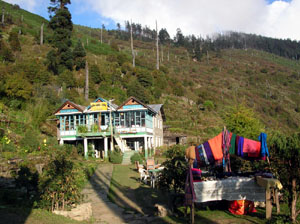 The village has close to 300 families, all of them of Tamang ethnicity, and as is usually the case in the villages of Nepal, they have managed to preserve their unique culture and identity through the ages. One distinguishing feature of Gatlang are its houses built of stacked stones and wooden roofs. Another is the typically Tibetan-style dress of the locals. Yet another distinctive feature are the large round gold plated earrings worn by the Tamang women. The community here has a custom whereby, during a communal ceremony, people become mits and mitnis (that is, friends for life).The former refers to males, while the latter refers to females.

Again, as with other Nepali villages, people here are deeply religious, with the Tamangs mostly practicing Tibetan Buddhism. When in Gatling, you might also get the chance to see the traditional Tamang dances. If you are lucky, you might even get to observe an exorcism conducted by weathered shamans—rhythmic drum beats, jingling bells, hypnotic chants, et al. In fact, there is so much of culture in the region and among the Tamang people, that there is a Tamang Heritage Trail here. This leads through many Tamang villages including interestingly named places like Ghore Tabela (‘Horse Stable’) at around 3,000 m elevation, Kyangjin (3,900 m), and Thang Shyap, and of course, Langtang itself.

As you walk up from Ghore Tabela towards Langtang village, you’ll be treated to wonderful views of the Langtang Himals to the north, while the trek to Kyangjin entails crossing the margins of the Ledrup Lirung glacier. From Kyangjin, you’ll see Brana Chumso (4,350 m), Menchmasu (4,650 m), and Kyangjin Ri (4770 m). If you are up to it, you can take the four –hour walk up to Tsergo Ri (4,984 m). As for the largest village in the valley, Langtang is a major trade center for the region. Nearby to it is a large complex of mani-stones and mani-walls; and all along the way, you’ll find houses with elaborately carved doors and fluttering prayer flags, as well as herds of grazing yaks. Kyangjin is another big village in the valley; it is a popular destination, this much can be deduced from the fact that it has some 20 lodges. However, it should be noted that, after Kyangjin, you’ll not find any more lodges on the trail, and it’s back to good old Mother Nature again, which is certainly what you have come for, haven’t you?