“Dashain is over and done with, for this year, at least! But, everybody’s looking forward to the another big one, that is, Tihar “

Nepal’s great festival of Dashain is over and done with. For this year, at least! But, everybody’s looking forward to the another big one, that is, Tihar, which is just around the corner. In addition to joyous get-togethers with family and friends, and plenty of feasts, people also enjoy the great weather at this time of the year. (A rare exception this year being the heavy blizzards on the mountains leading to many tragic deaths.) 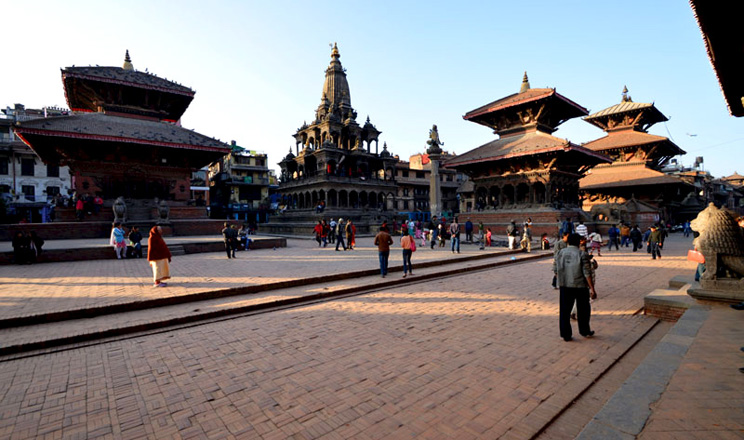 Anyway, the weather is pleasant mostly, and you just cannot stop yourself from going outdoors. I took one such outing just the other day, and it took me to Patan Durbar Square, where I found the famous square full of life. Plenty of folks were sitting on the steps of ancient temples, basking in the warm sunshine, and plenty of tourists, both domestic and international, were strolling around, clicking away busily. Well yes, busily, since almost every sight is worthy of a picture. After taking a leisurely walk to the end of the square, I sat down on a pati (a public resting place) next to Bhimsen Temple and the Mangal Hiti (a large watering place for all). 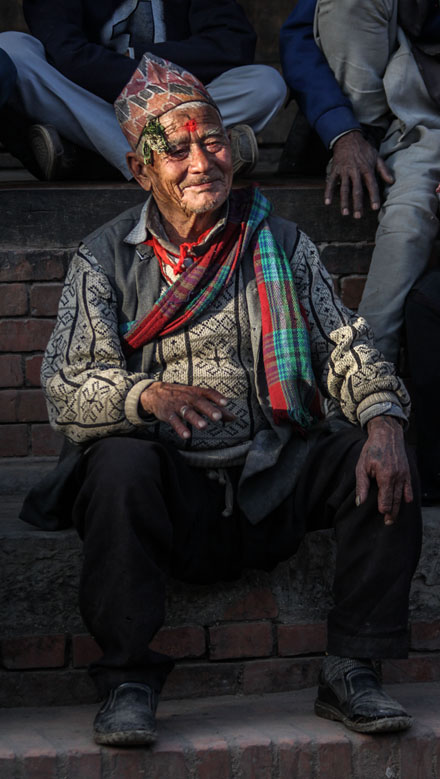 A bespectacled man, probably in his 70s, sat on a chair, watching people of all races and regions walk by. He was a fountain of knowledge, and perfectly willing to answer each and every question about the square. Soon enough, another man with a bent back, much older, came and sat down on the pati. I asked him, “Better to come out here in the sun than staying indoors, huh?” He gave me a toothless smile, and said, “Yes, my house in nearby, but it’s so much more fun here!”

As we talked, a gaggle of Chinese tourists came by, followed by a few Europeans. One Nepali guide was babbling on in Chinese, and that too quite fluently. The Europeans, mostly in pairs, looked pretty hardy and strong, wearing bright t-shirts and half pants along with sturdy trekking boots. They either had returned after a trek or were going on one, for sure. They were a contrast to the Asian tourists (most of whom were Chinese), who were mostly with families; kids, et al, and didn’t look much like trekkers, at least to me.

But, trekkers or not, everybody appeared to be enjoying themselves. After all, Patan Durbar Square is a world heritage monument, and it has so many ancient monuments within what is actually a not-so-large square, that it makes for a pretty hectic tour. You don’t want to miss out on anything, right? There’s the erstwhile royal palace, the centerpiece, no doubt, with many attractions within. Then, there are the ten or so temples in the square that are of different architectural styles, and what’s more, all very much in use and of paramount importance to the inhabitants of Patan, the ‘City of the Arts’. 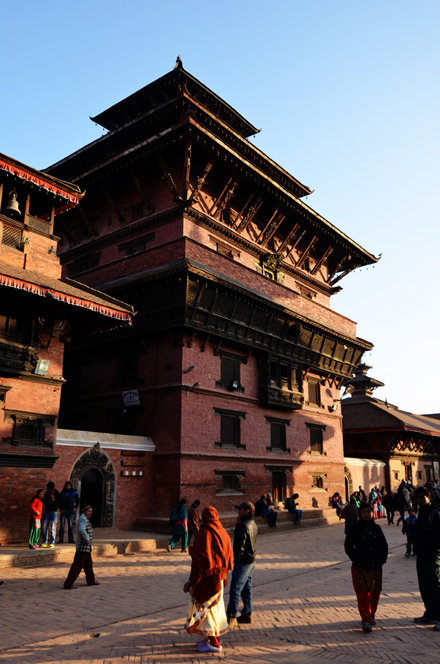 According to my 70s-something companion, the Krishna Temple had probably the best deity images, so I went to have a look. You have to climb up a narrow and short stairway to reach the first floor where the temple sanctorum is located (It’s the same with many other temples, including the Bhimsen Temple). The Krishna Temple is made in the shikhara style in stone, while temples like Charnarayan Temple, Bhimsen Temple, Kumbheswor Temple, etc. are built in the traditional pagoda style in wood with metal roofs. For your information, the Charnarayan Temple also has struts that are a voyeur’s delight. So, don’t miss it, either! There’s a famous Buddhist temple called Hiranyavarna Mahavihar (a.k.a. the Golden Temple) that’s a little distance away from the square, which is highly regarded for its architectural beauty.

The former royal palace has three courtyards: Mul Chowk, Sundari Chowk, and Keshav Narayan Chowk. The Tusha Hiti, which was once a royal bath, is situated in Sundari Chowk, while the former royal residences around the large Keshav Narayan Chowk have been converted into the Patan Museum, a much lauded renovation joint project of the Nepali and Austrian governments. It’s worth spending an hour or so in, since you not only get to view ancient artifacts (metal and wood statues, paintings, a genuine throne, old photographs, etc.), you’ll also be getting a firsthand experience of what it must have been like living inside the palace in the olden days. 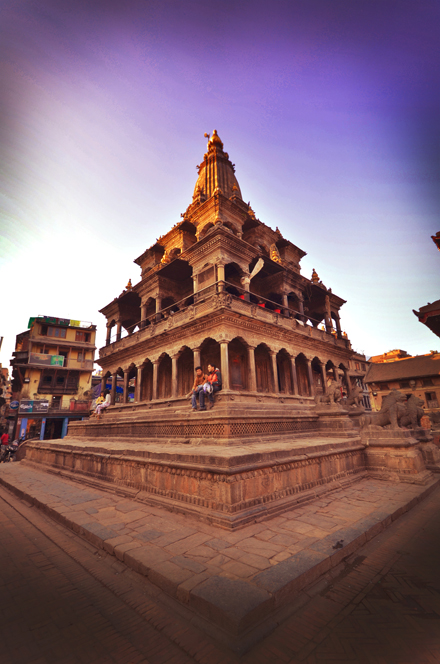 All said and done, an afternoon in Patan Durbar Square can be very rewarding and relaxing. It’s not only the ancient monuments that are so enthralling, it’s also the many people, both young and old, swarming around the square, making it so very lively and enjoyable. In fact, one of my best moments was when I saw two little girls (locals, no doubt) sitting on a window seat on the first floor of the museum chattering away about this and that while gazing out the exotically carved wooden window. They were totally immune to the presence of a score or so tourists strolling around the museum looking at artifacts. It seemed to me that they were, like most other locals, pretty much habituated to all this, and that’s what got me, really! It is not only the temples and so forth that are part of the square’s unique identity, it’s also the hordes of visitors milling around at all times. Indeed, Patan Durbar Square so aptly symbolizes the phrase ‘living museum’ that’s so often used to describe Kathmandu Valley.