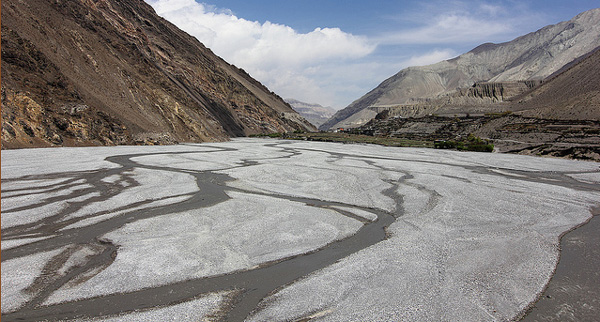 The black river, under the brooding sky, gushing its way mightily from far-off Muktinath, and cutting its way through Baglung district, seemed to be holding many a black secret. The heavy black clouds, the black silt and sand, and the blackness of the Kaligandaki River reminded one easily of black hearts, black death, and black promises. However, the abundant green mountains encasing the immediate vicinity managed to salvage some of the foreboding picture. There were some gold diggers on the banks, as hopeful as the Californian gold diggers of the 1800s, and as dirty. Gold and copper and fossils were to be found in the deep confines of the Kaligandaki. But if one looked into its black viscera, one got the feeling that the murky depths must be hiding many black and mysterious secrets.

As the bus rolled along the sides of the Kaligandaki, the big green, brown, and rocky mountains seemed to be desperately seeking our attention as well. But, for the duration of the journey that the smooth road paralleled the black river, one’s attention was totally absorbed by it.  And, why not? For this was the valley ruled by the mysterious Kaligandaki.  It was certainly not so before the Kaligandaki had come into view. For a major part of the 72 km journey from Pokhara to Baglung, picturesque scenes of burbling brooks, scattered white, frothy waterfalls, lush greenery, compact and postcard villages, and high hills constantly brought out sighs of wonder from the soul. Often, one had to forcefully remind oneself that this magnificence of nature’s bounty was in Nepal, and not in some exotic foreign locale.

The soul had already been stirred the night before in Pokhara when a full two hours had been given to staring at the gentle and serene Fewa Lake. I had not been able to pull myself away until the last boats had come ashore, their bellies disgorging sated nature lovers, and the lights had started to twinkle in far away hills. The soul had been so stirred that I had taken the five kilometer walk from Badam on lakeside to Mahendrapul in town. My decision to do so was proven to be devastatingly wise when I came across all sorts of lovely resting houses (calling them hotels will be doing them injustice), and equally lovely eating places (again, not restaurants, for the same reason), with their designer lights and manicured green gardens, which I would have missed had I taken a taxi. The lovelier ones were nestled in tiny gardens in the side streets.

Badam and Pardi on lakeside reminded me at once of a bride in all her bridal finery, awaiting the arrival of the groom’s procession. Pray she is not disappointed; the atmosphere was not exactly one of joy, however, in June, this being the off-season. The sighs from the soul were anyway beginning to come one after the other when the next morning I hit the road to Baglung, some four hours away by bus. As we climbed higher and higher on the winding but surprisingly good road, the air became cooler, the sights became more stirring, and the sighs of the soul became more rampant. And, when Kaligandaki’s black presence overwhelmed us, my whole being became subdued in front of nature’s impressive performance.

By the time we reached Baglung after passing through Phedi, Kande, and Kusma, my eyes were, however, jolted from their tiredness on seeing big paintings of Tuborg, Tiger, Yum Yum, and Wai Wai on the sides of an incline near Baglung. Pepsi welcomed us to Baglung, Coca Cola did likewise, and I strained my eyes to see if the policemen in their guardhouse at the entrance of Baglung also had Pepsi and Coke printed on their caps and uniforms. Baglung was not disappointing, in fact it was more than I had expected. The town boasts of a fairly good hospital, a campus, a movie hall, and shops with goods that would satisfy even the most finicky customers. From Baglung, one can trek to Galkot, a day’s walk, and from there, on to Beni some three hours away. All in all, Baglung and its surroundings are a fitting adjunct to Pokhara, one of the loveliest cities on planet earth.