There are only 14 peaks over 8,000 m in the world. Annapurna I, at 8.090 m, is one of them, and it is the 10th highest mountain in the world. This majestic Himalayan peak in mid-western Nepal is the focal point of the country’s most popular trekking route, the Annapurna Circuit Trek. More than 80, 000 tourists visit this region every year. It should be noted, however, that had it not been for the fact that the tiny Lukla airport, the gateway to the Everest region, has only a very limited capacity for tourist inflows, the Everest Base Camp trek would have undoubtedly been the number one attraction in terms of tourist numbers. 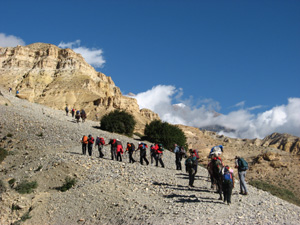 Anyway, the fact remains that, as of today, it is the Annapurna area that gets the largest number of visitors.  Considering that about 40% of all visitors to Nepal opt for mountain tourism, these are quite large numbers, even though it’s still much smaller compared to more easily accessible natural area tourist sites around the world. Actually, this is not so bad, keeping in mind that development will undoubtedly have many adverse effects on the natural beauty and exoticness of such areas. This is something that is affecting the Annapurna region due to the road being built in the area since the last seven years.  Yet, credit it to the enterprising spirit of those in the trekking business that the negative effects have been combated by developing newer trails far away from signs of modern development. This is, in fact, not only a sign of enterprise, but equally so, a mandatory move. Consider this: if the existing route were to be used for the Annapurna Circuit, on the completion of the road, the route would come down to a matter of just 30 km from the original 215 kilometers! 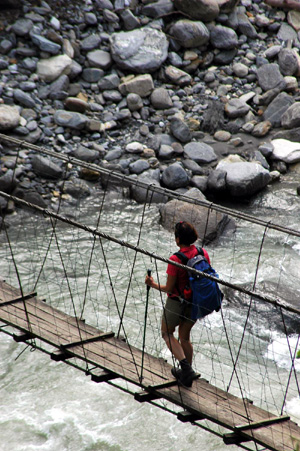 Right, that’s all about some specific concerns regarding development and trekking  Annapurna region. Now, let’s start at the beginning, in case you wish to experience what the Annapurna Circuit is all about. You drive down from Kathmandu to Dumre, and then on to Besi Sahar (about seven hours). Here, you stop for the night and the next day, you start hiking on a trail along the Marsyangdi River. You get to see a lot of excellent mountain scenery, including artistic looking terraced paddy fields and bamboo groves. Many of the locals you meet on the way will be from the Tamang and Gurung communities.  You get to cross a couple of swinging suspension bridges, an experience in itself, and you’ll also see some lovely waterfalls along the route. You stop at Bahun Danda (1,310 m) which you reach in seven hours.

The next stop is at Chamje (1,430 m), a hike of about six and a half hours, all the while through splendid scenery. Early the next morning you start hiking to Dharapani (1,860 m), again a walk of some seven hours. On day seven, you hike steadily uphill for around six hours to Chame (2,670 m), from where you get to see Annapurna in all its glory. You take a well-deserved rest here and having rested well, you start off for Pisang the next day. The walk is pretty tiring now, always uphill. You pass through many barley fields and apple orchards before making your way through a narrow gorge, with pretty steep sides, to enter upper Mustang. The area takes on a new look now, the climate being an arid one here.  You stop for the night at Pisang (3,200 m). 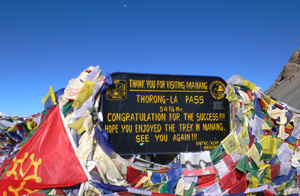 The nest morning, you take off for Manang (3,540 m, 7 hrs). You are deep into Mustang territory now, and you’ll see that the region is pretty much Tibetan in culture. Chortens and mani walls (sacred Buddhist objects) are everywhere.  In a village called Braga, you’ll not fail to see an interestingly located gompa (it stands above a collection of Tibetan style houses on the hillside). The imposing sight of Annapurna Ii, III, and IV are also a sight for sore eyes.  You rest at Manang for a couple of days; you deserve it, and you got to acclimatize your body to the increasing altitude. After having rejuvenated yourself, you begin climbing again, this time your goal is to reach Leder (4,260 m), some three hours away. A further three hour hike takes you to Throng Phedi (4,450 m).You are nearing stratospheric heights! The toughest part of the trek starts now, as you hike up to Throng La (pass) at a height of 5,416 meters. You have to walk up for quite some time (many hours) and climb over a couple of hills. However, when you finally gasp and scramble your way to the top, you will be glad you made the grueling climb, because, from this vantage point, you can see the entire Annapurna range as well as the Mukuti and Mustang peaks, as well as the Kali Gandaki valley far below. 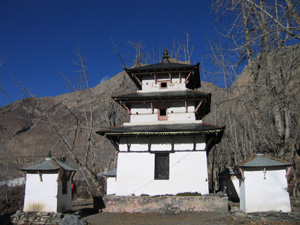 After having your fill of the fantastic landscape, you start walking all the way downhill (Thankfully, did you say?) to Muktinath (3,800 m).  Now, this place, it’s an important pilgrimage site for Hindus and Buddhists. It has 108 stone spouts through which flows sacred spring water. There are also a couple of tiny blue flames in the temple nearby that burn incessantly, fuelled as they are by natural gas. A splendid backdrop to all this is Dhaulagiri, which at 8,167 m is the world’s 7th highest mountain.  After having paid homage to the gods Vishnu, Shiva, and Padmasambhava, and after taking a running shower under all the 108 spouts to cleanse yourself of sin, you begin the pleasantly downhill walk to Jomsom (2,710 m), the pleasure all the more intensified because of the spectacular landscape all along the hike.

Stay the night in Jomsom, where you will find the accommodations and other facilities to be quite up to the mark. Have an apple pie or two; it is not for nothing that this trek is also referred to as the “Apple Pie Trek”. The region is famed for its apples as well as the liquor derived from the same. So, down a couple of shots as well, it’s probable that it will do your health a world of good.  And, while you are at it, banter around with some of the locals around the place. Most of them are of Thakali, Gurung, or Magar ethnicities; all three can hold their drinks well, it must be said. 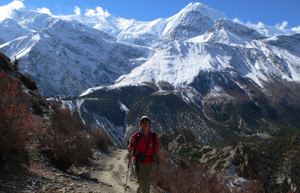 The rest of the trek takes you to Tukche (2,590 m), Ghasa (1,970 m), and Tatopani (1.189 m), walking through the Kali Gandaki gorge, the world’s deepest ravine, and the Rupse Chaharo waterfall. At Tatopani, spend some time soaking yourself in one of its hot spring water pools; it’s a relaxing experience, no doubt, but you probably need it, as the next day you face the daunting task of climbing all the way up to Ghorepani (2,750 m). Near to it is Poon Hill, from where you can observe fabulous sunrises and sunsets over the Himalayan range. The gloriously changing colors will surely mesmerize you, and guess that’s as good a way as any to end the experience of a lifetime, for now all that’s left is the leisurely ramble down to Pokhara (915 m).