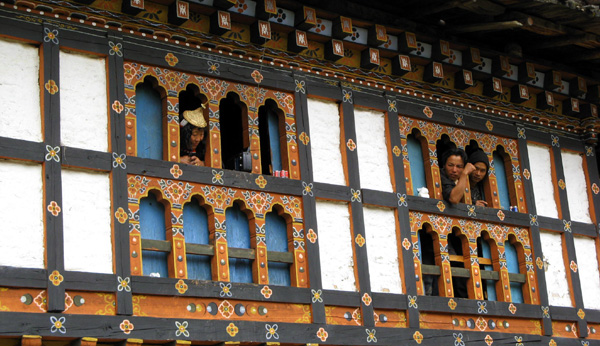 As your excitement at the eminent arrival in Paro Airport rises, you are scanning through the window looking for some distinguishing landmarks that tell you that you are in a different country. The airport buildings are not an architect’s dream, but fine examples of what you will be seeing a lot more of on your travels. The style is genuinely Bhutanese, with some allowance to modern buildings use. You will soon find that the style is unique to Bhutan.

Because of the country’s almost complete isolation for centuries, Bhutan’s geography had a great influence in the development of its architecture. Bhutan has indeed seen very few changes in its architectural system since the earliest times. The main roots of its architecture go back to Tibet, along with religion and trade. Drawing inspiration from older forms and ideas, the architects of Bhutan developed a style which is peculiar to their country. Displaying a great sense of innovation, they made each dzong, temple and monastery a unique creation, different from all others but at the same time maintaining a perfect unity of architectural style throughout the country. Used originally as centres of power, dzongs are fortress-like structures now used as district administrative headquarters and religious centres. Large and mostly coloured white, you will see these in the large cities of Bhutan. They stand out in the first view of the cities. 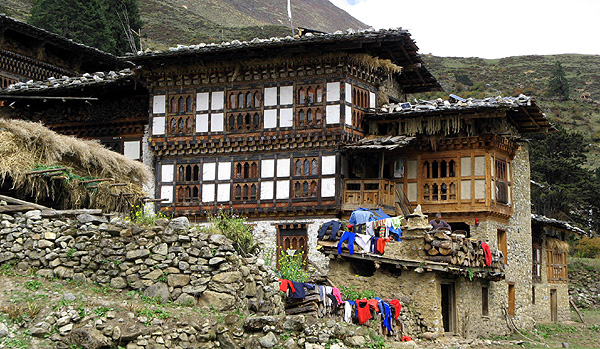 The main features of Bhutanese architecture are the result primarily of natural conditions, and especially the climate. In contrast to the arid landscape of Tibet on the northern side of the Himalayas, Bhutan has much milder climate with abundant rainfall, especially during the summer monsoon. This particular climate has produced alpine type of vegetation with forests of oak, cypress, juniper, pine and fir. This plentiful supply of timber has given birth to an architecture in which wood plays a major role. Shingle roofs and half-timbering are commonplace, as the raw materials are easy to find. Rocks shaped into bricks form the lower half of buildings. There are still many mud-constructed houses. The foundations are made of stone and on top of these the walls are erected. They are made of rammed mud, and are sometimes half-timbered walls with their wide windows facing south. The timber frame structures, assembled with a system of pegs, are filled by plastered bamboo weaving. This method of construction means that the many windows on the sunny side of the house can be opened to let in as much light as possible. Glass panes are still a rarity in the countryside of Bhutan. Mostly, there are sliding wooden shutters to close the window and protect the inhabitants in cold and windy times.

Many villages in Bhutan are merely hamlets of up to 15 houses, arranged in such a way as to offer protection against effects of the climate. They are built close together and copses of trees are sometimes planted around the village to act as windbreaks. In such a mountainous country, locations of suitable places for houses are dictated by the terrain, and the need to utilise the maximum suitable area for food production. The general pattern of houses is more or less the same from the Ha Valley and Paro regions in the west to the town of Tashigang in the east. The mud surfaces are usually whitewashed, and there are many decorations painted with floral, animal and religious motifs. Some of the most common patterns represent the lotus, the eight auspicious symbols, and mythical animals. These add to the feeling of gentle charm when walking through towns and villages.  Homes in Bhutan house more than just people. The ground floor of rural homes is designed as shelter for animals, cattle in particular. The second floor is for people and the attic is used to store produce. There may also be a family shrine on this floor.  The stairs between floors are made by cutting grooves into the trunk of a tree. On the back of the tree there are grooves which can be held onto to provide stability. The top of many houses is an open space, with the roof covering the open-plan surface where crops are dried and stored.  Roofs themselves are traditionally made out of wooden shingles and covered with pitch. Large stones are placed upon the shingles to prevent them being blown away. 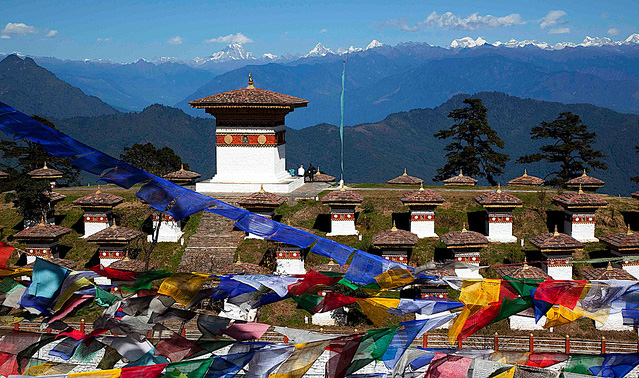 Looking at villages and cities from a distance, notice that the pitch of the roofs is almost identical, being 12-15 degrees under government building regulations. There is something of a neatness about the view and you are not disappointed when you get close-up. Neat houses, people in national costume and highly-decorated shops, and a genuine warm welcome when you enter a shop. Thus, the man-made structures deserve as much attention and admiration as the magnificent scenery that makes Bhutan a destination for refreshing the soul.

Whilst visiting Bhutan, you are never far away from the fluttering sight of prayer flags.  Whether they are high up on hillsides, on bridges over rivers or standing close to buildings and near religious sites, they add a distinctive character to the landscape. To see a great splash of coloured flags over a mountain pass will give you a sense of relief that you have achieved the summit, which may also be the spirit behind those who put them there. These splashes of colour add to the already stunning scenery to be seen along any of the roads of Bhutan. 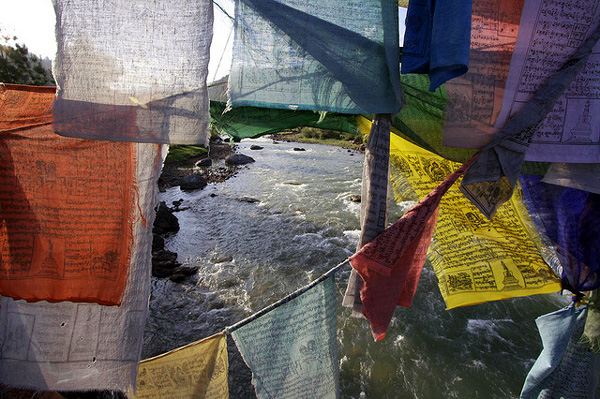 There are many strands of the ancient Buddhist belief, and likewise many are the reasons for the flags. Some believe that the emblems originated in ancient India, and were used as battle flags, bearing mantras and prayers. The tradition then migrated to Tibet, from whence it passed into Bhutan, which has a very strong Buddhist culture. The flags are made of loosely-woven cotton.  In days gone by, the cotton was produced on the lowlands, the mantras and prayers carved onto woodblocks by skilled woodcutters, and the ink produced using soot and other ingredients. Thus, it was a labour of love producing the flags and then hoisting them in remote places. The flags fluttering convey to the gods the message, and when the strands of cotton fly off they take the message with them. Flags over rivers and streams cast a shadow over the water, and so the message gets carried downstream. Those setting out on travel or a new venture will often be the ones who place these flags. Most flags seen are multi-coloured, with the colours representing: blue – space, white – air, red – fire, green – water, and yellow – earth.

Flags are traditionally fastened to wooden poles vertically or sewn on to ropes horizontally. Vertical flagpoles are fastened with a dagger on the tip, signifying the god of wisdom and knowledge. A wheel at the base of the dagger signifies the continuous rotation of the wheel of dharma. The flagpole, which is made smooth and white by removing the bark signifies the compassionate. Clusters of vertical poles dressed in only white prayer flags are seen. In fact, the auspicious number of poles is 108. These are erected 45 days after the death of someone to guide and protect the soul on its way into the next life. Whatever the connections, or otherwise, and whatever the interpretations, the sight of fluttering flags becomes just one part of a visual experience that is Bhutan.

The Bhutan national animal- the Takin

The national animal of Bhutan is the endangered species the Takin. The reason why Bhutan selected the Takin as the national animal is associated with Bhutanese religion and mythology. It was during the time Lama Drukpa Kuenly (1455 – 1529) the Divine Madman and Bhutan’s favourite saint who was known for his outrageous antics. One day, his devotees were gathered to witness his magical powers and they asked him to perform a miracle. However, the saint, in his usual unorthodox and outrageous way, demanded that he first be served a whole cow and a goat for lunch. Having devoured both and leaving only the bones, he stuck the goat head on the bones of the cow. To everyone’s amazement, upon a command by him, the animal came to life, arose, and ran into the meadow and then began to graze. The animal came to be known as “Dong Gyem Tsey” and can still be seen grazing on the mountain meadows of the kingdom. Due to its uniqueness, the Takin continues to befuddle taxonomists. Unable to relate it to any other animals, they have put it in a category by itself, that is, Budorcas Taxicolor. 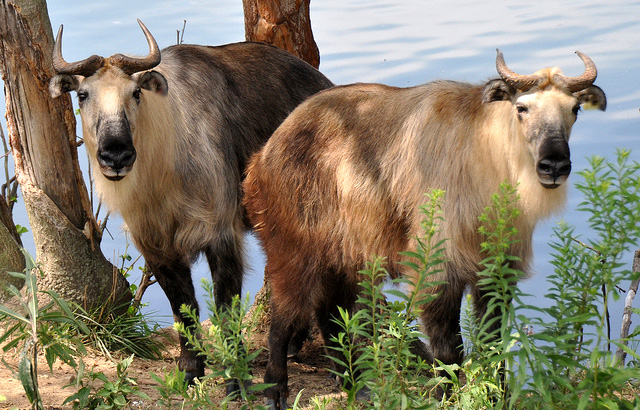 The Takin is one of the larger and stockier of the goat antelope family, with a plump, bovine-like body which is covered with dense long yellow to brown hair. Its shorts stocky legs supported by two large two toed hooves and strong claws are an adaptation to the mountainous environment. The large head is made distinctive by the large arched “Roman” nose. The animals can weigh up to 300 kilograms, and a height of 130 centimetres.  Both the sexes have strong horns which are 25-30 cm long and curve out, backward and upwards at the tip. Takin are found in the eastern Himalayan ranges and western China. In Bhutan, they are found primarily in the Jigme Dorji Wangchuk National Park, which is mostly at a height of 7000 metres above sea level. A small herd is kept in Motithang Takin Preserve, a wooded enclosure north west of Thimpu, where tourists are taken by their guides to witness the strange-looking herbivores.