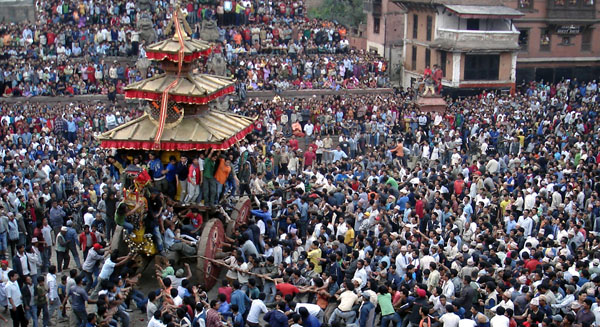 If you want to be part of a festival in which hundreds of people (most of them inebriated) are bent on pulling two huge wooden chariots in different directions, then by all means, you are welcome to the famous Bisket Jatra of Bhaktapur. It is celebrated for a few days before, during, and after the Nepali New Year, which this year is from 12th to 18th April 2017. In addition to the gods Bhairab and Bhadrakali on two massive chariots (raths), other gods and goddesses are also enthroned on palanquins and taken in a procession around various localities of the ancient town. The raths are pulled by means of ropes by groups of young men. During the procession, they are set to rest at certain places in the city where the locals come and pay their homage to the deities.

During the festival, two wooden poles (lingos) are erected in two parts of the city. The major one is brought down in the New Year, during which time, the two massive raths are also made to clash with each other. These two events obviously call for a fair degree of pushing and pulling, and this is compounded by the fact that separate groups of local young men vie for the honour of crashing the huge wooden pole to the ground. In the meanwhile, other similarly enthusiastic young men are busy testing their strength by pulling at the raths in a virtual tug-of-war. Bedlam follows. You might well be wondering, what a festival! You might also be wondering how it all started.

Well, Bisket Jatra originated during King Jagajyoti Malla’s reign (1613 to 1637). The good king loved a legend so much that he wished to commemorate it by holding a special festival in its honor every year. The legend in question goes like this: once upon a time, there was a princess who seemed to be cursed—anybody who married her, somehow died on the morning following the honeymoon night itself, and what’s more, it was discovered that the marriage hadn’t been consummated yet in each single case! In this way, several hopefuls lost their lives (uselessly). Then, along came a wise guy who also offered to lay his life on the line by marrying the cursed princess. He, however, had a plan; come what may, he would do nothing (nothing whatsoever) but stay awake on the fateful night. And so, as he lay awake, he noticed a frightening sight—from one of the sleeping princess’ nostrils slithered out a fearsome-looking serpent. Now, our hero, he was not only wise but courageous as well, and with one stroke of his sword, he sliced off the serpent’s head. This ended the turmoil and fear the city dwellers had been under for quite some time. The bringing down of the pole symbolizes victory over evil while the two raths clashing with each other symbolizes consummation of marriage. Nice legend huh? Terrific festival, what?

Below is the video of the festival