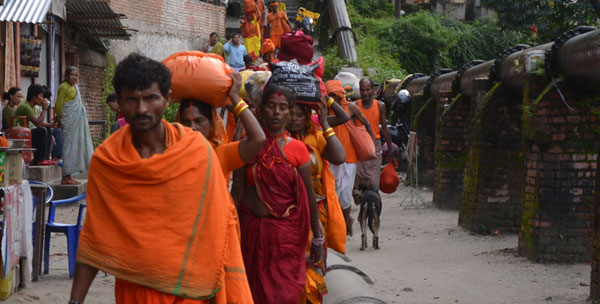 Pilgrims walking towards pashupatinath in Kathmandu.

You have probably seen the movie, “Gandhi”. In it, one of the most moving sights must surely have been the thousands of people following the frail dhoti-clad figure of Mahatma Gandhi, striding ahead with the help of a wooden walking stick, during one of his salt marches. Well, now imagine the same throng without Gandhi at the head, and all clad in saffron and carrying a wooden stick across their shoulders holding two pots of water on both sides. This is a completely different march of course, and consisting of a much larger number of people. It takes place every year without fail in the month of Shravan (July-August). This is the Shravani Mela, and this year it will strat on 21st july and  end on 11th 2014.

During this month-long mela (festival), as many as half a million devotees, all dressed alike in saffron robes, walk barefoot from a place called Sultanganj in Bhagalpur District of Bihar State to another place called Deoghar in Jharkand State, both in India. The pilgrims are known as kanwarias, on account of their carrying the long wooden pole, called a kanwar, across their shoulders with two pots of water hanging on both sides. The pots carry water from the sacred Ganges River in Sultanganj, which is the only place where the river flows north. This water is used to anoint the holy Shiva lingam at the Baidyanath Dham in Deoghar. 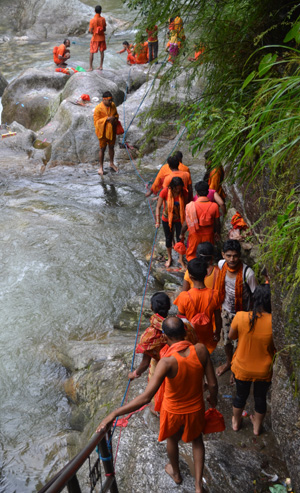 If you are in one of the Terai towns during this time, you’ll no doubt see a lot of saffron clad people readying to go on this unique pilgrimage. They usually form groups of family members, friends, or their particular localities. You’ll hear them shouting “Bol Bam” repeatedly. This is actually the only phrase they will be uttering throughout their pilgrimage. It’s a phrase in praise of Lord Shiva. There’s a definite exuberance among pilgrims, more so than in other festivals. The saffron dress, the forgoing of all meat and liquor, walking barefoot for miles and miles, the uttering of only two words, the community of like-minded kinfolk, well, one must assume that all this goes towards the creation of quite a fervor among the pilgrims.

And, that’s what you will sense and feel in Shravan in many of the towns and villages of Nepal’s Terai, an area strongly influenced by the goings-on in the neighboring Indian states. They go in their thousands to pay obeisance to Shiva in Baidyanath Dham. They go in groups consisting of men and women, young and old, the frail and the strong. For all of them, it’s a pilgrimage that they are determined to make at least once during their lifetime. For the more zealous, they try and make it every year, year after year. It’s an experience that that they look forward to eagerly, at least as long as they are strong enough to make the arduous trip. Here, it must be said that, even for the frail, it is the general euphoria so prevalent throughout the about 105 km march that probably sees them through. 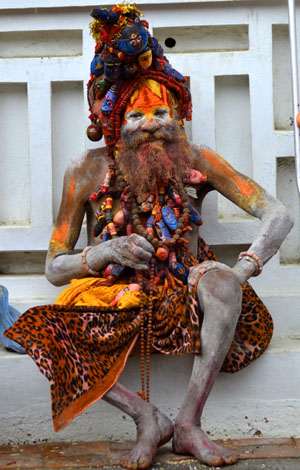 At the same time, while there is camaraderie and exuberance on the road, things get a little out of hand once they reach the temple, because one can imagine, with so many thousands wanting to anoint the sacred lingum, it is natural for stampedes and such to occur once in a while. And, this is the aspect of the mela that authorities have the most trying time contending with. Here’s one newspaper report on the first day of this year’s Shravani Mela that should make clear the enormity of the problem, “The new arrangement of time slotting for darshan at Baidyanath Dham proved to be a dampener on Tuesday, the first day of the month of Shravan. The arghya system of offering holy water on the first day remained chaotic with over 62,000 devotees visiting the temple. The 16 time slots which were earlier decided by the district administration to control rush of the devotees failed with none following guidelines and jumping queues. Police had to resort to minor force which caused stampede, but no one was injured. Due to heavy rush of the pilgrims, time slot arrangements failed and devotees did not assemble at the Nehru Park near Shiva Ganga as directed earlier. The wrist band put on the kanwariyas were tied for Rs 10. But, due to heavy rush, they could not be activated resulting in failure of the time slot system. The activated wrist bands guaranteed time schedule for the devotees’ entry into the temple.”

A kanwar, two water pots, a towel, a bag, required money, a piece of plastic cloth, two pairs of saffron-colored dresses, a torch and a few candles, a carpet and two sheets (chadars), a match box and apacket of agarbatties (incense sticks).

Maintain celibacy; remember Lord Shiva by keeping mind, heart, and speech pure; speak the truth; be inspired by charity and service; take bath before taking the kanwar; recite Bol Bam; don’t use oil and soap; don’t wear shoes; don’t take any article made of leather; avoid dogs (dogs should not be touched).