Lumbini in Kapilvastu District of mid-western Nepal is one of the four essential Buddhist pilgrimage sites for devotees around the world, the others being Kushinagar, Bodh Gaya, and Sarnath in India. Lumbini is where Queen Mayadevi gave birth to Siddhartha Gautam in 563 BCE. It is believed that young Siddhartha, who later became revered as Gautam Buddha, lived here for the first 29 years of his life. Gautam Buddha propagated a new way of life that became the Buddhist religion, one that attracted millions around the globe. No wonder Lumbini receives hundreds of thousands of visitors on pilgrim tours from many places, and especially more so from countries like Japan, China, Thailand, Sri Lanka, Bhutan, Myanmar, Vietnam, Kampuchea, and India, where many Buddhists consider it their duty to go on such a Buddhist pilgrimage at least once in a lifetime. 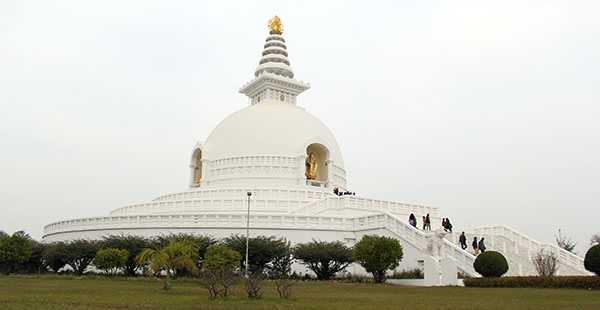 The idea of developing Lumbini as an international Buddhist pilgrimage site was first mooted in 1976 during a visit by U Thant, the then United Nations president. The design was conceived by the famous Japanese architect Kenzo Tange in 1978, and it divided the area into three zones—the Sacred Garden Zone, the Monastic Zone, and the Educational and Culture Zone. The Monastic Zone is divided into the East Zone where followers of Theravat Buddhism have built monasteries and the West Zone, where followers of Mahayana Buddhism have built theirs, along with monasteries built by followers of Tibetan Buddhism. The most famous site in the garden is the Mayadevi Temple. It has a stone image of Queen Mayadevi holding on to a branch while giving birth to Siddhartha Gautam. Near to the temple is the Puskarini Pond where the infant Siddhartha took his first bath. The Ashoka Pillar, erected in 249 BCE by Emperor Ashoka, marks the exact birthplace of the Buddha. Lumbini was inscribed as a World Heritage Site in 1997 by UNESCO. The ambience of the garden is such as to make it a most relaxing spiritual retreat and most visitors on a Nepal tour make it a point not to miss going there.

Well, taking this spiritual journey to such a great spiritual retreat is not difficult, especially with premier tour agencies like Royal Mountain Travel Nepal having more than one such itinerary. Here’s one program: If you are coming in from India, you travel via Gorakhpur to arrive at Sunauli, the Nepal border entry point about 3.5 km from Siddharthnagar, which is the district headquarters of Rupandehi District, and the gateway to Lumbini. You’ll be met by your tour agent on the Nepal side who’ll be there with a vehicle. Now, what if you are traveling from Kathmandu? Well then, take a flight to the Gautam Buddha Airport which is about 3 km from the city center. Simple, and pretty convenient as well, since there are quite a few regular flights. If you are the more enterprising type, you can drive down to Siddharthnagar (about 265 km from Kathmandu).

From Siddharthnagar, you carry on straight to Lumbini, about 22 km away. Now, you’ll feel real nice about having made the spiritual journey to this most peaceful spiritual retreat because you’ll find yourself in a veritable Eden. Spend the day roaming around and visit all the important sites as well as many monasteries as you can. If nothing else, you’ll be more knowledgeable about different monastery architectural styles, that’s for sure. The Lumbini Gardens is a spiritual retreat that will want you to spend more than a few days in its serene environment, and if you are so inclined do so by all means.

But, of course, there are some other significant places to visit to complete your Buddhist pilgrimage Nepal tour, and so, it’s off to Kathmandu, the capital, where is located two very important Buddhist pilgrimage sites, Boudhanath and Swayambhunath Stupa. Boudhanath Stupa is the holiest of all Buddhist pilgrimage sites in Nepal while Swayambhunath Stupa is one of the most ancient. Forty meters high and with a diameter of 100 m, Boudhanath Stupa is said to be the largest stupa in the world. It was erected during the Licchavi period (2nd to 9th century) and underwent extensive renovations in the 17th century. This mammoth stupa is believed to contain the remains of the past Buddha Kashyap.  It has a huge dome, capped by a pyramid like structure, on which are painted the all-seeing eyes of the Buddha. The base of the stupa is three-layered, and around it are 108 Buddhist deities and rows of brass prayer wheels. You will find monasteries from all four schools of Mahayana Buddhism within the stupa complex. Buddhist pilgrims from all over the world, and especially from neighboring India and Tibet, are frequent visitors to Boudhanath Stupa, another of Nepal’s great spiritual retreats. 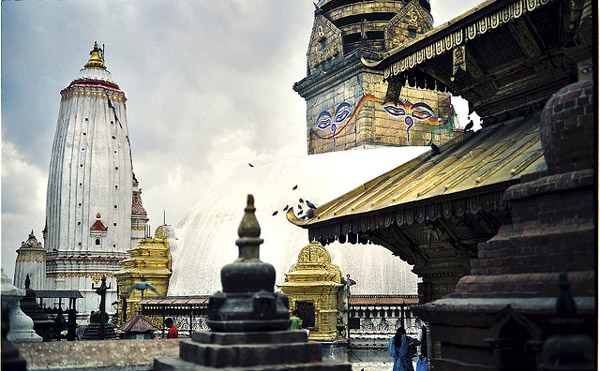 Swayambhunath Stupa, located on the top of a conical hill has a lofty white dome and glittering golden spire along with the all-seeing eyes of the Buddha gazing out in all directions. A third eye is painted above each pair of eyes. An easily distinguishable landmark in Kathmandu’s landscape, it has been an important Buddhist pilgrimage site since the 5th century. You can get to the stupa by either climbing 365 steps up the hill or by a winding road on the other side. You’ll find a lot of monkeys, family et al, inhabiting the area around the stupa, and sometimes there might be some who are a bit bothersome. You’ll also find a lot of new additions, such as Buddha idols and prayer wheels, around the site, including a Buddha statue that is 57-ft tall. No Buddhist pilgrimage Nepal tour can be complete without paying a visit to Swayambhunath, another fantastic spiritual retreat, as well.