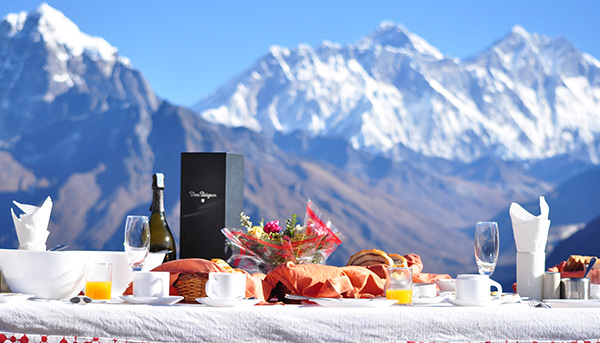 A helicopter tour is generally quite an adventure, no matter where in the world you fly, but you can take it for granted that you’ll not experience a heli tour more dramatic than the Everest helicopter tour. It’s not only because of the fact that you’ll be flying at some really high altitudes, it’s also because you’ll be getting the ‘once-in-a-lifetime’ experience of having a champagne breakfast on top of the world, with the world’s highest peaks as your companions.

This once-in-a-lifetime experience is luxury travel at its most adventurous, and it’s a luxury holiday that will be one of the most exciting holidays of your entire life. There are many high quality tour operators in Kathmandu, such as Royal Mountain Travel, to cater to this particular whim of yours, that is, to have a champagne breakfast on top of the world. There are two ways you can fulfill your desire, either by taking a direct helicopter ride, or by combining it with a rejuvenating trek in the high Himalayan region.

Here’s what you can expect to have towering in front of you while having a magnificent breakfast at one of the fine resorts at Kongde (4250 m):  Mt. Everest (8,848 m, highest peak in the world), Lhotse (8,516 m, fourth highest), Makalu (8,485 m, fifth highest), Cho-Oyu (8,201 m, sixth highest), Gyjungkhang (7,952 m), Nuptse (7,861 m), Pumori (7,161 m), Ama Dablam (6,848 m), Tawache, Thamserku, and Kusum Khangkaru, among others. Imagine sitting down at a table with these giants as the backdrop! You certainly couldn’t ask for a better dining experience, that’s for sure. There’s nothing but the awesome grandeur of nature all around you. You’ll probably gain a new realization about scale when gazing at these magnificent snow clad peaks so near at hand. 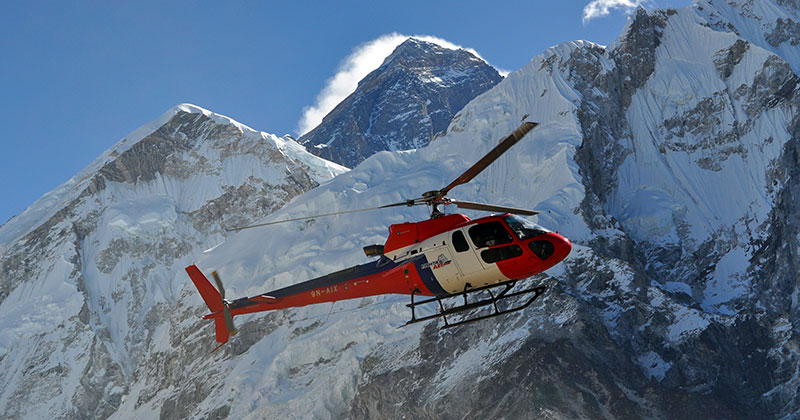 Here’s the usual way you take a helicopter tour to Kongde. Provided the weather is in good stead, at around 6:00 a.m. or thereabouts, you take off on a sturdy helicopter or on a plane from the domestic airport in Kathmandu and land in Lukla (2,800 m) a quarter of an hour later. A short, short flight, no doubt, but landing in this high altitude airport is an exciting adventure in itself since one end of the runway is 60 m higher than the other! From here, you go on another helicopter for a fantastic close-up sightseeing experience of the mighty Himalayan peaks before landing at the pad in one of the resorts in Kongde. Alternatively, you can go by helicopter direct to Kongde, which should take around 45 minutes or so. It must be said here that flying to Kongde is not an easy matter, and getting there on a helicopter depends on a fair amount of good weather and lots of luck. That’s what any helicopter tour to the Himalayas entails. Anyway, all things going well, a helicopter tour to Kongde for a champagne breakfast, and back to Kathmandu, is usually completed within about two-and-a-half hours or so.

Now, the couple of resorts at Kongde are architecturally interesting and superbly maintained. In case you want to spend a night or two there, know that you won’t be wanting for creature comforts. You get to live in well furnished rooms with attached modern bathrooms. There’s running hot water, and you’ll have access to wifi internet as well. Service is great; you’ll get to know Sherpa hospitality is all about. As for your dining pleasure, Sherpa, Nepali, Japanese, and Western cuisine are available. For dessert, feast your eyes on the sweeping panoramic view of the Himalayan sentinels hovering before your awestruck eyes. 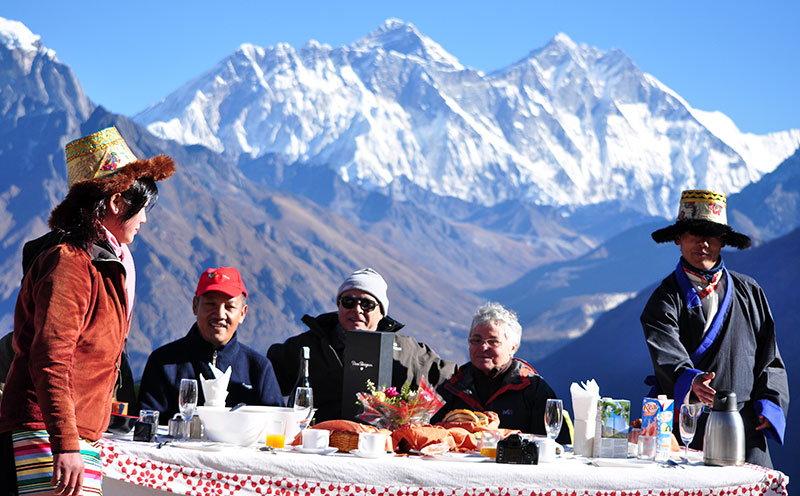 As mentioned somewhere above, there’s another way to reach Kongde, and actually this is the more adventurous, not to mention leisurely, way to get there. Here’s a typical itinerary: First, you fly from Kathmandu to Lukla (either a plane or helicopter ride); on the way you’ll initially see the Langtang and Jugal Himal ranges, and sometime later, Rolwaling Himal. From Lukla, you walk to Phakding (four hours) where you stay overnight at a hotel. The next day, after breakfast, you take a five- to six-hour trek to reach Namche. On the way, you come across Thamserku (6,623 m) looming on the near horizon, and then arrive at a small village called Monjo; this is where you can buy tickets to enter the Sagarmatha National Park (the highest such park in the world). Another village, Jorsalle, is on the way as well, and then you get to cross a suspension bridge, before eventually reaching Namche Bazaar, where you halt for the night. The next morning, you can explore Khumjung and Khude. Two hours of trekking uphill through a forest, you reach Hillary High School in Khumjung, which is one of the larger Sherpa villages. You will also be visiting the Hillary Hospital in Khundel. Views on the way are as spectacular as one would expect and you get to see up-close views of Everest, Ama Dablam, Lhotse, Thamserku, and Kangtega.

Now, the following day, you trek to Thame (3,900 m), a matter of some four hours. You’ll see Cho Oyu on the way, and you have your lunch at Thamo, the birthplace of the Everest record breaker Ang Rita Sherpa, who has climbed Everest umpteen times, and that too without oxygen! Then you go across the Bhote Kosi River to arrive at Thame where you hunker down for the night. Early morning, you take a short excursion to the Sumdur Peak (5,529 m), from where the views are something out of this world, and come the next morning, you are on your way to Kongde (4,200 m), which you reach in some five to six hours of pleasant walking through a forest for some time. Stay the night in one of the fantastic resorts here, and in the morning, treat yourself to a champagne breakfast in the company of Everest and some of her most lofty Himalayan sisters. 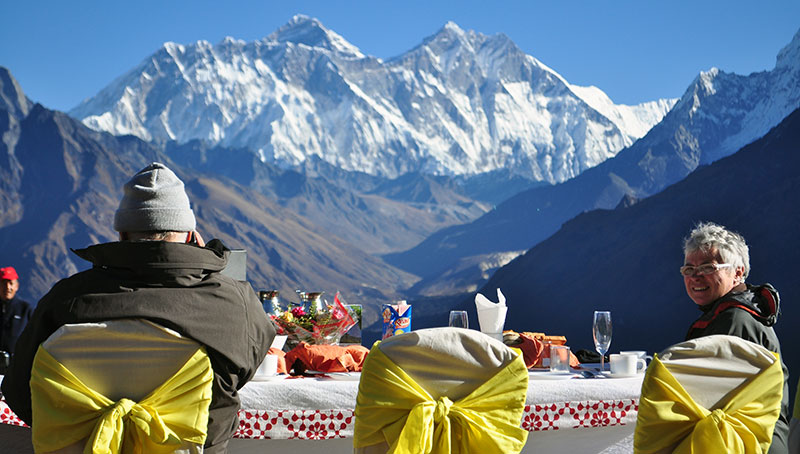 After thus reinforcing yourself, both physically and spiritually, take a hike up to Pharak Peak (4,900 m) from where the view of the entire Solukhumbu region is simply riveting. Having had your fill of this visual treat, walk back to Kongde and spend another blissful night in the comfortable lodgings. It’s a luxury holiday, is what we have been saying right from the beginning! The next day will see you walking again for two to three hours on the way to the Sherpa Peak (5,050 m), from where an enthralling view of Everest, Cho Oyu, Rolwaling, Sumdur Himal, and Khumbu Himal are on offer. Kongde Himal, especially, will appear to be within touching distance. There’s a glacial lake a half an hour away from here that will probably make you do some thinking on global warming and such things. Then, the coming day, you trek back, first to Phakding, and then onwards to Lukla, from where you take a helicopter ride back to Kathmandu. Now, having read all this, wouldn’t you agree that a champagne breakfast on top of the world after a terrific helicopter ride and some healthy trekking would be the luxury holiday of a lifetime?