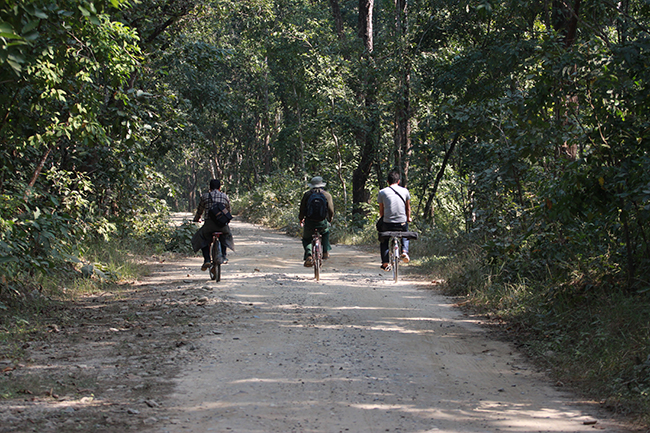 Cycling is not my cup of tea and, honestly speaking, whenever I picture of cycling – trailer of a fit body peddling mountain-bike around Rocky Mountains – it usually haunts me. I often avoid outdoor games, which is not good you’d say and, yes, when cycling is evolving as a hip trend around the globe; my tardiness was not favoring me at all but, rather, turning me into a mouse-potato.

One of my friends, energetic and athletic, asked me if I could join him and his cousin to Chitwan. They were planning to stay at Tharu Community Homestay, and told me it was a perfect place to rest like a log as it was built by the river and I could go for fishing. Working six, consecutive, days a week from last 8 months, I did need a vacation, and then my pals were talking about a place, an ideal place, which I just couldn’t refuse. We got on board to Chitwan few days after I received my leave from office.

After few hours we reached Community Homestay. At my surprise, whole community, especially women, were standing at the main gate all geared up to welcome us. They welcomed as if we were one of the ministers of Nepal with red colors, flowers, fresh juice and, surprisingly, with a big applaud. It had been few minutes that I was in Chitwan and cards of surprises were already thrown to me. It was lovely experience though, funny but mesmerizing. 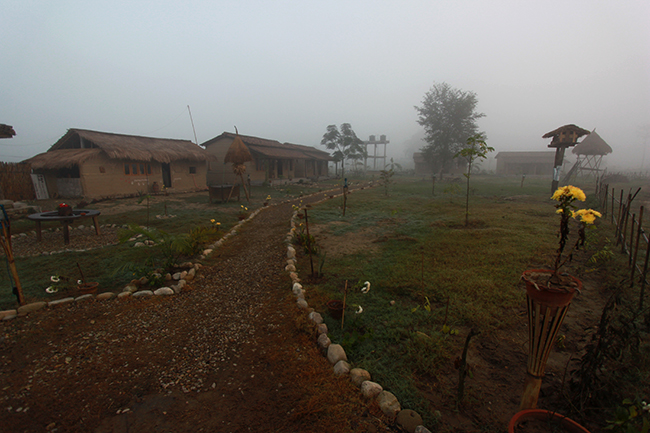 Tharu Community Homestay at the dawn

Homestay looked more arranged and beautiful than I imagined. Rooms were clean, traditionally carved and had attached bathroom. After shower, we went for dinner. It was late already and hunger was making us angry, seriously. We found out that Homestay has its own restaurant and Tharu Cultural Dance was about to perform. We took our dinner close to the performance, and enjoyed food and dance, simultaneously. Then one of the officials from homestay came with a piece of paper, which was the schedule, our itinerary, and announced that we were going to Bis-Hajari Taal (20 Thousand Lake), which was 30 km, up and down, away from where we were standing but in a cycle.

We all agreed. I had no other options, both of my travel-mates looked very happy to cycle. I didn’t even show a slightest signal of protest for merely two reasons; I am cycling at Terai, flattest land of Nepal, and we have to cycle inside the jungle to reach the Lake, sounds much adventurous then. Next early morning we had a human alarm, one of the workers from the kitchen, that in a very short period we would be leaving (cycling) to the Lake. 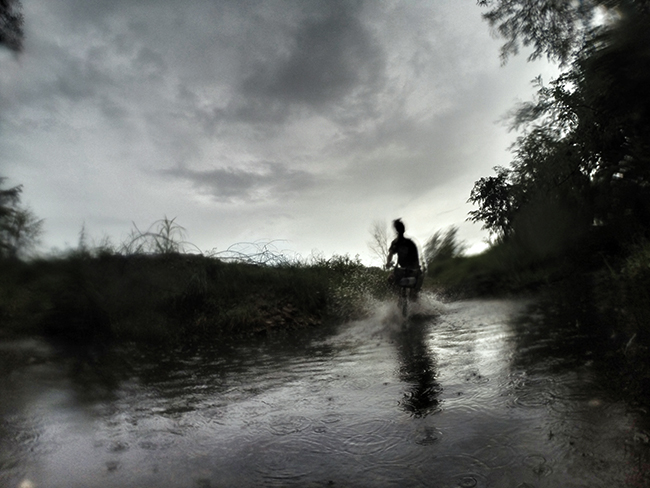 We were greeted by the guide just outside the room, who later turned out to be one of the best guides, with three cycles, which doesn’t even look like men’s cycle. We decided each cycle for us, hopped on and followed the lead of our guide. He started his initial wheels from pitched road and he turned his handle to the residential areas where people were bathing, chickens were crossing the roads, kids were playing with flat truck-tire, old men were sitting in the patio – watching the world pass by, housewives were rushing, girls were walking to their colleges and boys were in cycle. After few minutes we reached the river, where we have to carry our cycle to cross it and we did. We were, then, in front of the entrance to the massive jungle. It was preserved by the government and our guide paid entrance fees. 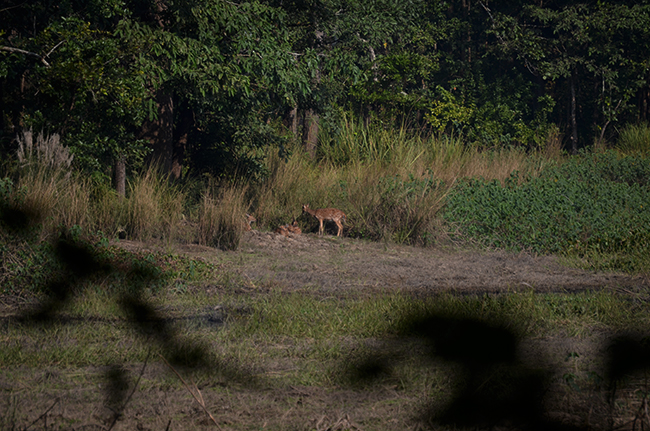 Cycling inside the jungle creates a hallucination as if you are a youth breeze whistling with the leaves and bushes, understanding the feelings of animals that how relaxing  it must be to run like a free spirit. Our guide stopped his cycle and diverted our attention to the road, to the foot-marks of rhino that, he said, had just crossed that same road. Things were getting exciting, after few minutes we were again stopped to watch the heard of young deer taking sun-bath and a rare species of eagle, which was, I supposed, taking sun bath. 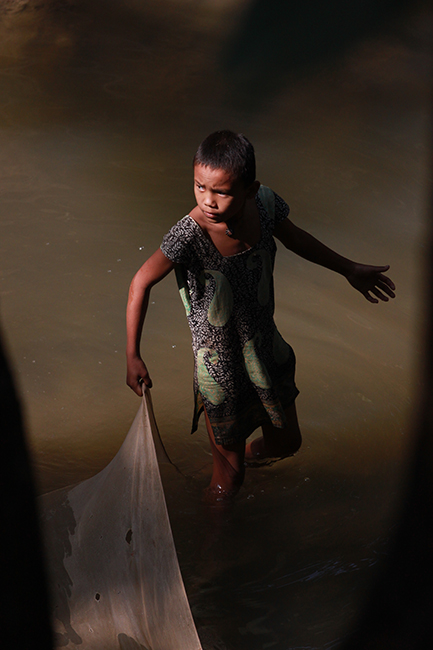 Guide asked us to be low and silent, but later we realized that we were not good at camouflage. That eagle took off and its wing was larger than we anticipated. No wonder, it was a rare sight, we agreed on our guide and followed his lead. Cycling seemed to be much fun, sometime we had to cross the local fishermen fishing in the river. Father fisherman was teaching his daughter to fish, and his two sons looked already perfect. Many times we saw deer crossing our roads, monkeys swinging the branches and abandoned boats. 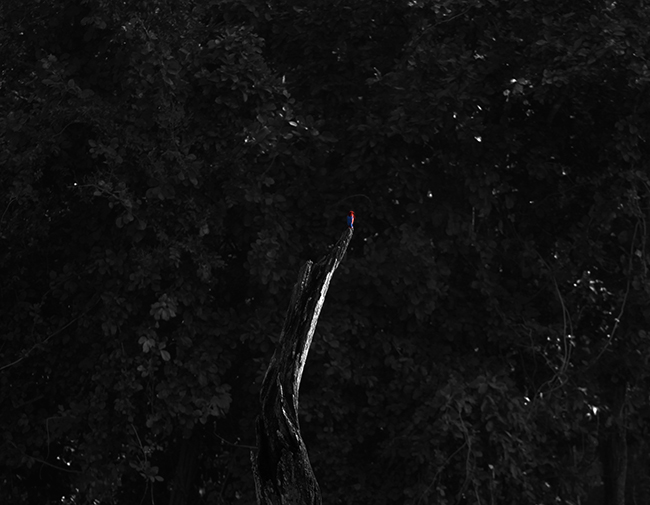 After all Chitwan was all about fishing and hunting in the past. Once we reached Bis Hajari Taal (20 Thousand Lake), there were few people already inhaling the beauty of lake. I had never seen such a calm lake before. Guide told us that lake was made of 20 thousand small ponds, hundreds of trees, home to few thousand birds and crocodiles. Yes, crocodiles, we looked each other as soon as he mentioned crocodile. Cousin asked him that if we could see any crocodile, he put his both hands on his waist and stared at the lake. He pointed at point and cried “Look! There it is”. We thought that was some kind of log, but then he gave us his binocular and I saw one of the luckiest living beings on earth – crocodile. Sleeping like a log, taking sun-bath and does not look hungry at all. 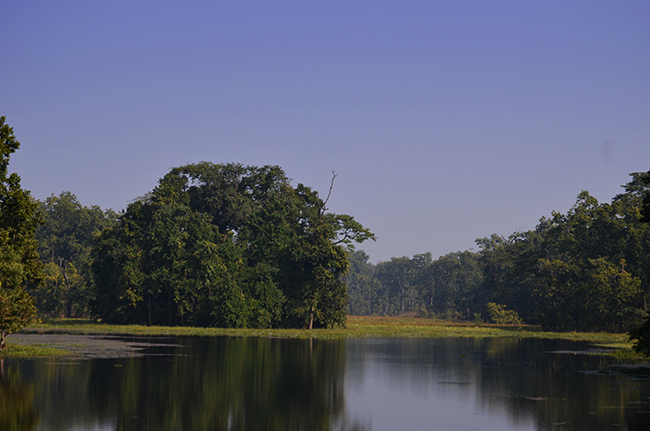 We, for many minutes, didn’t talk to each other. We were looking at the birds, floating trees, and this giant lake, which was there before none of us did exist and, now, completely ignoring our presence.  It was the ‘peace of mind’ state. For sure after cycling 15 km, who wouldn’t get hungry? My eyes and mind were at peace but my stomach was not satisfied, and protesting.  I proposed to return for lunch, no one showed any objections. We left the place, but I know I can’t lie to myself; I will be back to this place, back again with this very own ladies cycle – cycling all the way to this miracle phenomena of nature, but with food.