Darjeeling, also called the ‘Queen of the Hill Stations’, is celebrated for its tea and its toy train, a World Heritage Site. The fabulous Kanchenjunga Himal (8582 m), the third highest peak in the world, is a familiar backdrop to the town. Darjeeling town is the headquarters of Darjeeling District in West Bengal of India. The district has four sub divisions, namely, Darjeeling, Kurseong, Siliguri and Kalimpong. The hill areas of Darjeeling District are located within the lesser and sub Himalayan belts of the eastern Himalayas. The area is bounded by the Sikkim Himalayas in the north, the Bhutan Himalayas in the east and Nepal Himalayas in the west.

The principal economy of Darjeeling Hill Area depends on tea production, tourism, horticulture, agriculture and forestry. The major portions of the forests are found at elevations of 2000 m and above. The area located in between 1000 m-2000 m is cleared either for tea plantation or cultivation. Darjeeling town has many places of interest for tourists. Some of them are: Observatory Hill, Tiger Hill, Batasia Loop, Himalayan Zoological Park, Himalayan Mountaineering Institute, Japanese Peace Pagoda, Lloyd’s Botanical Garden, The Mall, Shrubbery Park, etc besides many interesting monasteries and temples. Darjeeling produces the world’s best aromatic tea and it has scores of tea gardens with their own processing plants. All Darjeeling teas are hand plucked. 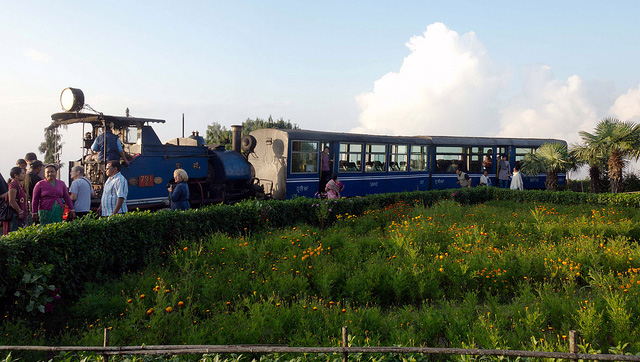 Kalimpong is situated at an altitude of 1250 m and enjoys temperate climate throughout the year. It is reputed for its orchids besides colonial style bungalows of the British period. The Monastery Viewpoint and the Zong Dog Palri Fo Brang Monastery which houses the famous holy scriptures in 108 volumes, ‘Kanguyar’, brought in by the Dalai Lama personally from Tibet at the time of his consecration are notable tourist spots here. Kurseong is situated at an altitude of 1458 m and is 51 km from Siliguri and 30 km from Darjeeling. The district as a whole is also renowned for its centers of educational excellence. There are many famous schools in Darjeeling, some more than 100 years old.