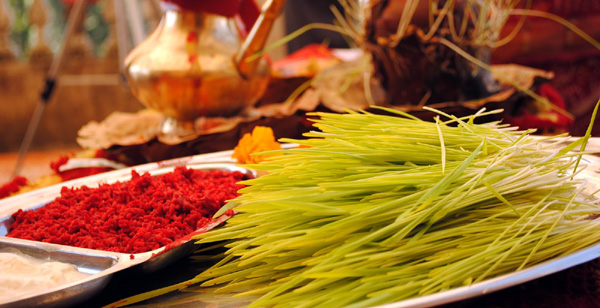 In the beginning of October (25th Sept to 3rd Oct 2014), you will most probably see a goat or two tethered in many a home’s yard. They are meant for sacrifice on Maha Asthami, the eighth day of the greatest festival of Hindus in Nepal, that is, Dashain. Oh yes, you’ll see a lot of blood being split on that day in many a temple throughout the country. Expect to also see quite a few articles published in dailies this month urging people to forgo the sacrifice of animals in Dashain. Not many will pay heed to this, that much is for sure, but at the same time, an increasing number of people are giving up the tradition, and instead, making do with symbolic sacrificial offerings, generally the slicing of large gourds with a khukuri on that day.

Anyway, this is one aspect of Dashain that has been the subject of much controversy in recent times. Credit this to the growing awareness about animal rights and such things. But now, let’s talk about the other aspects of this ten-day festival. It all begins with Ghatasthapna (September 25th this year). This is when every Hindu household in the land sows a handful of barley seeds on a sand bed in the puja room. A small lamp with a thick wick is also kept lighted for the full ten days of Dashain. A male family member does the daily puja during this period. The barley seeds will quickly sprout into nice yellow leaves (called jamara) and these will be offered to everybody who comes to put on tika from the family elders during the final day of Dashain. The tika consists of a mixture of bright red vermilion powder, some curd, and white rice, and is put on the forehead. You’ll most certainly see many people with such tikas on their foreheads and jamaras on the head or behind the ears during the day of Tika. As for the perpetually burning lamp, it’s kept covered with another earthen pot on which thick black soot settles. This black soot is also put on the forehead, just beneath the red tika on that day.

The first nine days of the festival are called Navaratri (nava: nine and ratri: night). If you get up really early during this time and take a tour of temples dedicated to Goddess Durga or her various manifestations, you’ll be surprised to see pretty big crowds thronging the temples from as early as even three in the morning. This is actually a daily ritual for most people during Navaratri. Another integral part of the festivities are the feasts families have throughout the ten days of Dashain. Meat dishes in many varieties are dominant, and during this time, many families do not eat boiled rice, instead going for beaten rice (chiura).  Fulpati falls on the seventh day. Jamara from Gorkha, the original home of the former Shah kings, is brought into Kathmandu in a stately procession. A covered palanquin is borne on the shoulders of loin-clothed Brahmins who are escorted by soldiers dressed in military uniforms of ancient times and carry bayoneted muskets. The eighth day is Maha Asthami, a bad time for thousands of buffaloes, goats, ducks, and pigeons that fall victim to the unforgiving slash of the khukuri. Its night is known as Kal Ratri (black night). 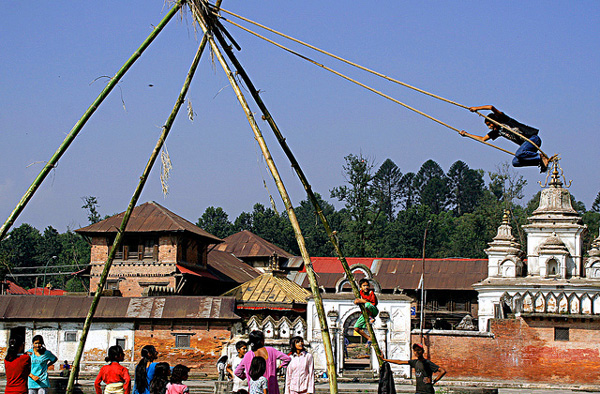 Maha Nawami is the ninth day of Dashain. This is the only day of the year when the doors of the famous Taleju temple at Hanuman Dhoka are opened for the public. This is also the day when the courtyard (kot) of the Hanuman Dhoka palace witnesses the official sacrifices conducted by the Nepali army, an occasion during which long bladed khukuris are used to slice sacrificial buffaloes’ heads neatly with a single stroke. Officers in full uniform stand in attendance while the military bands play war tunes and the big guns fire off a few booming rounds. The final day of Dashain is Vijaya Dashami, the day of Tika. One can expect all households to put up their best front then, since there will be lots and lots of visitors throughout the day. So, put on the new curtains, roll out the new-looking carpet, spread out dozens of cushions on the floor, and what not. Most households will have a large silver plate holding the tika, the jamara, fruits, and plenty of new notes. The last, since money is what will be changing hands, from that of elders to those younger than them, along with the putting on of tikas on foreheads and jamaras behind the ears.

Come the auspicious hour for putting on tika, the eldest in the family puts on tika to all other family members. Soon, visitors (generally relatives) begin to arrive, mostly as family groups. This is one of the best parts of the ten-day festival, the bringing together of kith and clan at least for one day in a year. Many come from far off cities and villages, some even after crossing the seven seas to make it home for Dashain, and all in all, it’s one tradition that is really something great. Another good thing about Tika is that, at least during this time, all rancor and long simmering quarrels are kept aside, and its gaiety and goodwill all the way.

Now, you may want to know about the aftermath of such a long and celebration-filled festival. Well, actually, Tika continues for at least the next four days to allow for latecomers to visit and get the blessing of elders. Dashain really ends on the 15th day, the full moon day, a day known as Kojagrata Purnima, which is also the day when everybody is allowed a breather and some much needed rest. Well-earned, that’s for sure!