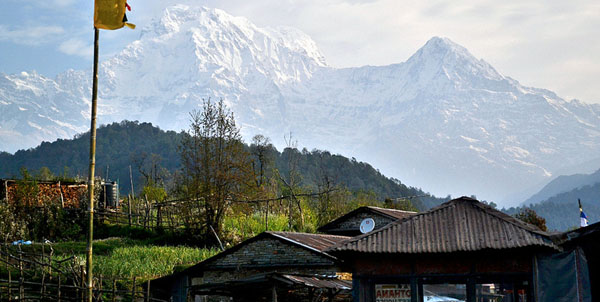 Most tourists visiting Nepal will make sure they spend a couple of days in Pokhara. Many will surely extend their stay to take a sojourn around the region, since Pokhara is a sort of gateway to many attractive trekking destinations. One such is Dhampus (1,770 m), a small village inhabited by mostly Gurungs, and some 23 km north-west of Pokhara. Dhampus once had the distinction of being the only gateway to many popular treks such as the ones to Ghandruk, Ghorepani, and Poon Hill, as well as to the most popular one of them all, the Annapurna Base Camp (the famous ABC trek). Treks to Machapucchre Base Camp, Annapurna Sanctuary, Jomsom, and Mustang are also equally popular treks that once began from Dhampus.

The hike to Dhampus begins with a drive down to Phedi (45 min) on the road leading to Baglung. From this starting point, the trail winds its way uphill through scenic terraced fields (a regular feature in the hilly areas), some forests, and picturesque little villages. On the way, you will come across stone steps spiraling steeply upwards that are a challenge, no less, to climb. The trek, on the whole, is moderately tough, and sure to give you a good deal of healthy exercise. However, on arriving at Dhampus, you’ll find that the effort has been worth it. The thought might also cross your mind that, sometimes, it is not the journey but the destination that is more important. 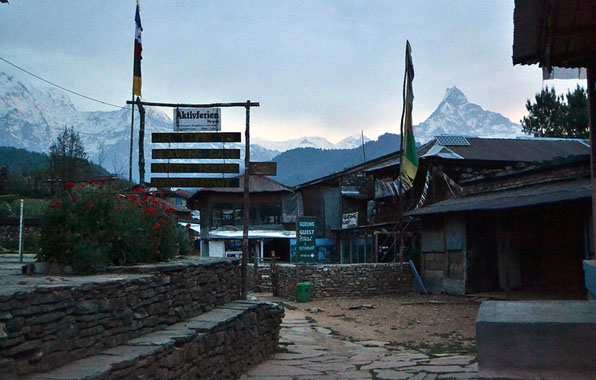 The village is located on the crest of a hill and is surrounded by verdant woods and acres and acres of fields swaying with millet and corn. The rice terraces on the hillsides add to the charm. It’s as good a representation of Nepal’s lovely mountain villages as any you will find in the country. The highlight of the village is, however, something far greater—the splendid views of the Annapurna range (Annapurna I: 8,091 m; Annapurna II: 7,937 m; Annapurna IV: 7,525 m); and Dhaulagiri (7th highest peak in the world at 8,167 m) and Manaslu (8th highest at 8,156 m). You might think that just being able to see these magnificent mountains is a blessing. However, there’s more. You’ll also be able to see Hiunchuli (6, 441 m), Lamjung Himal (6,586 m), Macchapucchre (6,993 m), and Ganesh Himal (7,446 m).

Most of the houses are slate-roofed and built of mud and stone, and one thing you’ll notice immediately is that there’s no dearth of lodges and eateries in the village. Most visitors make it a point to spend at least one night here, the reason being that the towering Himalayan peaks are best viewed at sunrise, when there are no clouds to hamper your vision. And, not to forget, you get to see a sunrise unlike anything you have seen before. As the sun rises from behind tall mountains, the first rays strike the lofty peaks, turning them a warm golden color. It’s a sight to die for, so make sure you get up even before the first light of dawn. You don’t want to miss this!

A night-halt at the village also gives you a good opportunity to experience the lifestyle of the locals and partake of their generous hospitality. The Gurungs are world famous for their courage under fire, with many of their clan earning high honors in great wars around the world. The British were the first to recognize their prowess in battle, and thus, many of them were recruited in the British Army.  They are no less acclaimed for their sense of humor as well as for their warm hospitality. So, all in all, you’ll be in good company when in Dhampus. 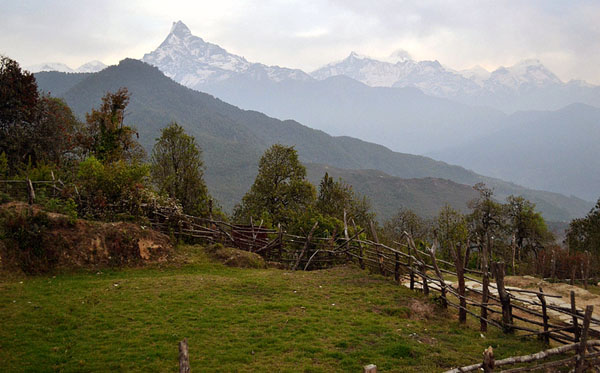 While in that area, take a walk also to Pothana (1,974 m), a short distance away (should take you around 25 minutes only).  The trail is stone-paved all the way, so you might think that you are walking on a road of the Roman era. The route is pretty scenic and you’ll be walking through forests of rhododendron, magnolia, oak, sandalwood, and pine. You’ll also see a growing from moss-covered tree holes, quite a fair number of orchids. All this is sure to make your walk a most pleasant one. As for Pothana itself, it is also taking a cue from the boom in business due to the growing number of visitors every year, and you’ll find homestay facilities here, besides of course, many eateries.  From this village, you can walk for some 20 minutes to arrive at the Australian Camp, so-called because some Australians are believed to have planted some Aussie grass seeds on a vacant site originally known as Thulo kharka (big pasture) here. Around it are a couple of houses and some tea shops.

On the whole, this pleasant itinerary from Pokhara to Dhampus, and on to Pothana and the Australian Camp, will provide you with a most enjoyable outing: not too tiring, and just a couple of days. However, considering the beautiful landscape you’ll be walking through, the spectacular views you’ll be seeing, and the friendly people you’ll be meeting, you’ll surely agree that not all treks have to be long and arduous to be an experience to treasure.