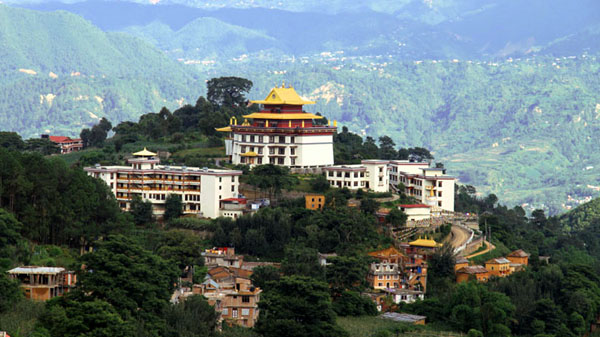 What do Richard Gere and Steven Seagal have in common, besides the fact that they are hot Hollywood property? Not difficult to guess (all that publicity!), they both profess to be devout Buddhists. And, yes, both have visited Nepal on more than a couple of occasions. The highlights of their visits have invariably been their welcome at some monastery or the other where they have gone to pay their respects. Both are great ambassadors for Buddhism and its noble teachings. Well, the next time you are in Nepal, you too can have an experience similar to theirs by staying at the Neydo Monastery and Guest House in Pharping, which is around 20 km southwest of Kathmandu, and just behind a village called Bhanjang. Actually, the guest house is located next to the Neydo Tashi Choeling Monastery. 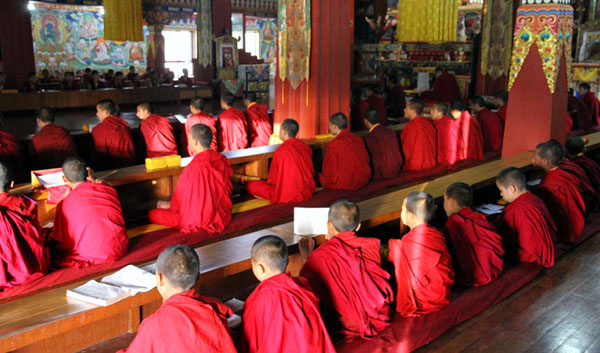 Some 200 monks live in the monastery, so you’ll have no dearth of teachers to show you the way. In fact, you can get close to them by being a participant rather just a spectator in the daily rituals; you can even have your meals with them, which should give you a deeper insight into what monks are like on a more personal level. The monastery’s location is interesting too; situated as it is near to the Asura Cave where Guru Rinpoche (Padmasambhava) spent a lot of time in meditation, ultimately attaining nirvana (the highest realization). Due to this proximity with such an important site, one can, if aware, feel a sense of positive energy around the place. The monastery has the biggest statue of the Amitabha Buddha in Nepal, flanked by statues of Avaloketesvara (Buddha of Compassion) and Vajrapani (protector and holder of the Buddha’s sacred teachings). 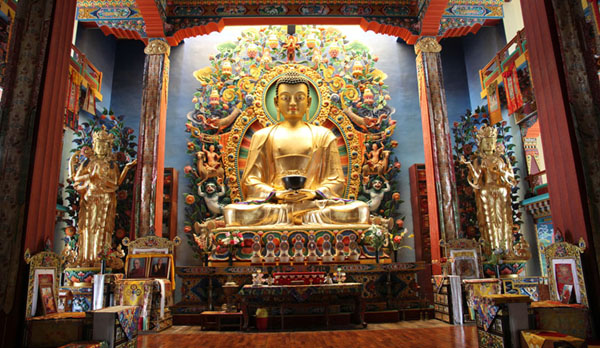 It’s not an ancient monastery as are many others in Kathmandu Valley; in fact, it started to be built only in 2006 and was opened just a few years back, and its purpose is to preserve the Neydo tradition, which is a union of Mahamudra and Dzgochen practices. To do so, various rituals, prayers, and so on are not only conducted regularly, but they are also taught to the 200 or so monks living there. In addition, Tibetan literature and Buddhist philosophy and ethics are also propagated at the monastery. Prayers are of various kinds, such as the Tara prayer and the longevity prayer, which are done every morning, and the Sitapatra-Paragita prayer and dedication prayer, which are done every evening. The Amitabha prayer is done on the 15th day of each Tibetan lunar calendar month while the Gyalwa Gyamtso prayer is done on the 25th and 30th days, and the Gonpo Ngodrup Kunjung prayer is done on the 29th day. Similarly, there are various kinds of rituals as well, such as the propitiation ritual and the tsok puja (which is done the 10th day of each Tibetan lunar calendar month), as well as the heart sutra recitation. The monastery was founded by Karma Chagme Rinpoche (full name: Karma Chagme Karma Tenzin Trinley) who is believed to be the seventh reincarnate lama of the Neydo Kagyu tradition. 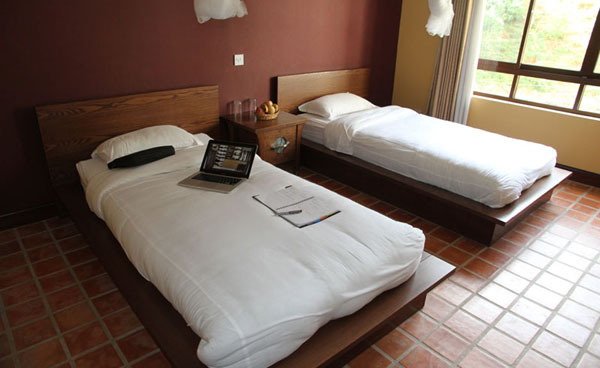 The guest house was built next to the monastery some three years ago. It has 23 guest rooms that are neat and functional, even if not really lavish in the décor department. All rooms have double beds or two single beds and come with a balcony of their own. The view from all the rooms are just great, with the south-facing ones looking upon the monastery while the north facing ones are overlook the verdant Hattiban forest and Banjhang village below it. The restaurant has an excellent and experienced chef named Kunzang who himself is a devout follower of the Karma Chagme Rinpoche. 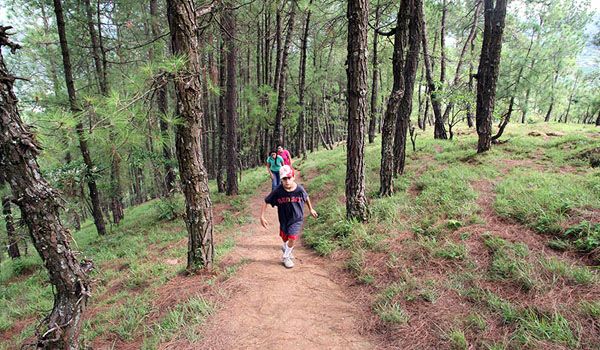 There’s plenty of other things you can do while staying here, aside from getting familiar with the Neydo Kagyu tradition. Things like hiking to nearby places like Hattiban (one hour); mountain-biking around the area; visiting Dakshinkali Temple, some one kilometer away from Pharping village, and Asura Cave; doing some yoga and meditation classes under expert supervision; etc. And, not to forget, your stay at the Neydo Monastery and Guest House could also be a good time to diet and detoxify yourself, for which Chef Kunzang could be a trusted advisor. So, what say? Seems like a worth a visit, don’t you think?