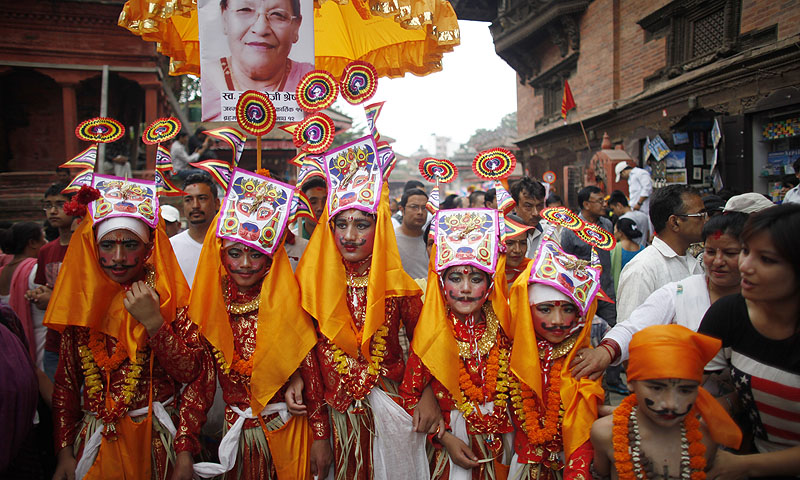 On a different day each year, in the month of Bhadra (August – September), thousands of colorfully masked people are seen cheerfully parading on the streets of Kathmandu, Patan, Bhaktapur and Kirtipur. The festival’s name is Gai Jatra (literally meaning the festival of cows) and nowadays it is a fusion of three traditions that came into being in three different periods of time. The first and the oldest tradition incorporates a cult and a worship of the ancient god of death – Yamaraj. Thus, the festival marks the acceptance and celebration of death in a positive way, as an inevitable part of life. Every family who has lost a member in the previous year is supposed to lead a carefully and intricately decorated cow through the city. In the absence of a cow, a boy dressed as a cow (the oldest for a male member lost and the younger for a female) can successfully take on the role.

The second tradition connected to the festival originates from the time king Pratap Malla ruled with Kathmandu and thus the festival earned its historical connotation. The king lost his youngest son which made his consort very sad and nothing could cheer her up. He ordered the Gai Jatra procession to parade in front of the queen and the cheerful crowd did manage to make the queen smile even for a short while. Ever since then, the Gai Jatra has gained a humorous side as well – the only occasion in the year during the monarchial times when people could engage in political satire without any consequences. Nowadays, people parade the streets and crack jokes, many times using the opportunity to make fun of the values, with the only goal of making the strict social rules defining the society looser, which would ultimately lead to its betterment. Since it is the only time of the year when cross-dressing is socially acceptable, the festival has become a target and a chance for the Nepalese LGBT community to seek for their rights in the country. Hundreds of gays, lesbians, transvestites and queer parade the streets in the celebration of their sexuality and their constant battle for equal rights and acceptance. With the LGBTQ community’s involvement, the Gai Jatra has earned its third tradition that defines it and the current times.

With the festival involving according to the needs of the society and resembling the times it takes place, the Gai Jatra is a perfect example of how festivals change with the passing of time. Gaining new meanings, but never losing its old ones, witnessing the Gai Jatra is like going back in the time when Yamaraj was first worshipped in the valley; in the times of the rule of the king Pratap Malla and his queen; all of that mixed with the contemporary struggles of our everyday lives fused in a synthesis of the complexity of the contemporary Nepalese society.

This year Gai Jatra falls on the 13th of Bhadra or the 31st of August. If you want to witness thousands of people celebrating the inevitability of death along with a lot of fun, music, dancing and jokes, as well as a celebration of the love and life of the LGBT community in Nepal, be in one of the three durbar squares. You will easily get along with the crowd, feast in the name of the beauty of life and dance and sing the monsoon away.