The man behind the reception desk at the Tourism Information Center on MG Road, Gangtok, asks me, “Do you have an ILP?” Seeing my confusion, he elaborates, “Do you have an Inner Line Permit?” “I didn’t know that I needed one,” I answer. “Well, then that makes your visit illegal,” he says. “But in Nepal we don’t ask you for any permits,” I respond somewhat righteously.

After some half-serious jousting, the matter is settled with the man advising me to say that I am from Darjeeling if asked. Actually, this was the only time I felt myself to be in an alien land; otherwise my two week sojourn in this lovely town was like being at home away from home.  Gangtok is like that: you will find mostly Nepali people everywhere and Nepali is the lingua franca.

Gangtok is 124 km from Bagdogra International Airport, 126 km from New Jalpaiguri Railway Junction and 114 km from Siliguri.  My journey began in Siliguri where I shared a taxi with five others. The three and a half hour drive on National Highway 31A took us first down to Teesta Bazaar along the Teesta River, and then, crossing the bridge, upwards to Rangpo, the border town of the erstwhile kingdom of Sikkim. It became the 22nd state of the Indian Union on May 16, 1975.

I stayed for two weeks in Gangtok and would have liked to live there forever: the weather is lovely (summer: max.21 degrees Celsius; winter: min. 05 degrees Celsius); the city affords enough opportunities for regular exercise (walking up and down); the familiar language and customs (80% Nepali); the brisk pace of development, and last but not the least, the relatively low cost of living. And, yes, the scenery is invigorating. I stayed in Tadong, some 10 minutes by car from the town center. 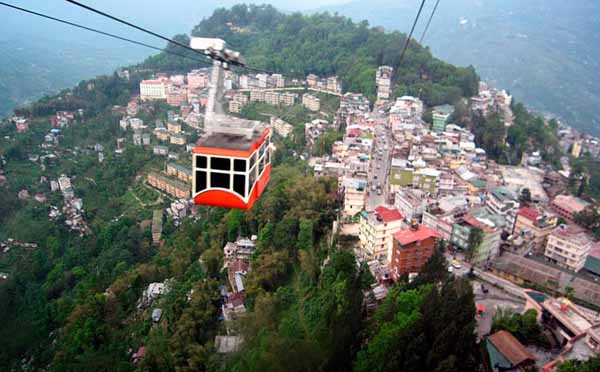 After breakfast, I walk out to the street; a taxi arrives, on the way from Ranipool to the town center. A point to note: shared taxis are the most common mode of transport in Gangtok. I get down at Metro Point and walk on to MG Road. There’s a bust of Mahatma Gandhi at the center of this boulevard and so that explains the initials. There are many shops and eateries lined up on both sides. I sit down on a bench for some time, taking in the lively environment. Some elderly folk are sunning themselves; the younger ones are busy shopping and eating. Next, I walk on to the circular shaped Lal Bazaar. Three storied, the ground floor has stalls selling vegetables, fruits, groceries, meat, fish, and other foodstuff. The first floor has most of the things found downstairs but, in addition, there are stalls displaying clothes and readymade garments, toys, and footwear, and here too, as almost everywhere else in the world now, one comes across stalls selling a plethora of Chinese made goods. The third story has more of the same.

After a couple of hours, I walk down back to Tadong. Midway, I pass Deorali where the lower terminal of the ropeway is located (yes, a ropeway transverses over the city), as well as some other important landmarks. I decide to visit them the next day. For now, I am content to amble along the road. The footpath on one side has a green colored railing that starts from Ranipool some 12 km downhill and continues right up to the town. So, walking is safe and easy. Across a bend, I come across the Indian Army’s Black Cat Commando Base. Further downhill is an imposing Gurudwara made of white marble. I walk on, taking short cuts down one of the many hillside stairways.

The next day sees me in Deorali once again. Passing the ropeway terminal, I visit the Chogyal Palden Thondup Namgyal Memorial Park and then go on to the Namgyal Institute of Tibetology, an interesting place with dozens of thankas and deity statues inside. As interesting is the adjacent library housing books on Buddhism, many of them quite ancient. I carry on to the Do-Drul Chorten (stupa). Young male monks in sleeveless maroon colored robes mill about. A group of female nuns are making their way up to the stupa. I can hear the sound of chanting coming from inside the huge hall. I peek inside; it’s jam packed. A dozen or so monks are in the front, some reading from scriptural texts and some beating a tempo on hand held drums.

I listen for some time to the hypnotic chanting and then leave, hopefully with blessings, for MG Road. I’m hungry now, so I try out an eatery serving momos and spring rolls. Sufficiently rejuvenated, I decide to take a long walk to the state’s premier school, Tashi Namgyal Academy (TNA). I admire the well kept grounds and the freshly painted buildings (bright red roofs) with their elegant Sikkimese design (dragons, stupas, and so forth). I take a short cut from behind TNA which lands me on to the road in quick time. I take the road going uphill which leads me to a taxi stand from where people travel to places like Tsongmo Lake (12,400 ft) some 38 km away. I want to go but then there are security checks on the way, and I don’t have an ILP; ditto for another famous tourist attraction―Nathu La Pass (14,450 ft). I curse myself for not getting my ILP at Rangpo! While returning, I decide to see the New Development Area, there’s a really nice bookshop, Rachna Book Shop, on the way, and further below, the lovely Rhenock Guest House, both worth visiting.

The next day, I go to Bulbulay, 8 km from town. Here is where lies the Himalayan Zoological Park. Before entering its gates, I go across to the temple called Ganesh Tok, from the top floor of which, I get a bird’s eye view of the sprawling town below. This feast over, I enter the 205-hectare park and am immediately transported into an extraordinarily tranquil world. The asphalted road meanders for miles through a dense forest, and today, it seems that I am the only visitor. It is bliss; the whole environment exhilarating.

The first enclosure I came across is that of the black bear. I wait silently on the raised platform over a vast open space surrounded by a white wall. The warning on the board reads: Keep silent. Be patient. You might see the animal if you are lucky. Fifteen minutes pass. I sit on the stone bench. It isn’t my lucky day. I stand up and… and… what should I see but a black bear standing and gazing up at me. Oh, wow, it’s my lucky day after all. We stare at each other, my bear and I, for quite some time. Eventually, I drag myself off, there’s plenty more to see: musk deer, blue sheep, barking deer, red pandas, a panther, some Himalayan Palm civets, a snow leopard, some Tibetan wolves, barking deer, langur monkeys, and goral spotted deer, besides various bird species.

The plump snow leopard lounges lazily; the Tibetan wolves are altogether different. Big, with white fur, three of them lie on top of their stone cave and give me alert looks, their ears all cocked up. The common spotted leopard is similarly ensconced within spacious surroundings. It brushes its body against the steel net. I poke in a finger and touch its silky skin. Elation! After some three hours, I begin the long trek downhill. The views all around are fantastic, I can see the Paljor Stadium far below.

Taking short cuts, I reach the 200-year-old Enchey Monastery and from there, an area that looks really posh; high government officials, including the Chief Minister’s, quarters are situated here. It’s fitting, really, that those who govern this tiny state should live in such a high place, seeing as to how Sikkim has to be thankful for its good governance, the result of which is that here is a hill station that is somewhat of a paradise. Yes, do visit Gangtok and fall in love with it like I did. However, remember to get your ILP at Rangpo!