Kathmandu to Pokhara is a lovely eight-hour drive for those so inclined. For those short on time, it’s only a 30-minute flight. Whatever mode of transport you take, you are all set for an exciting adventure. Pokhara is one of the loveliest cities in the world, according to many. However, this time around, you aren’t spending much time here; you are on your way to an exhilarating trek further away. Pokhara is the starting point. From here, you catch an early morning flight to Jomsom (2,800 m), a matter of some 20 minutes. 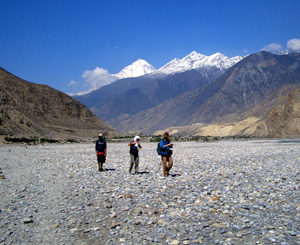 Located on the banks of the Kali Gandaki River, Jomsom is the district headquarters of Mustang district. It is also known as Dzongsam (New Fort) and has Dhaulagiri (8,167 m) and Nilgiri (7.061 m) peaks as its backdrop. It’s a pretty town with a distinct identity, but you are not going to spend much time here either. You start trekking from here to Kagbeni (2,810 m), the gateway to Mustang, some four hours away on foot. The winds pick up as the day progresses, and will probably be refreshing, if taken in a positive light. The hike goes along the river bank and the views all around you are spectacular, specially highlighted by the soaring Nilgiri and Tukuche (6,920 m) peaks in the background.

One particular aspect of the trek is that you hike through the world’s deepest gorge—the.Kali Gandaki gorge—which lies between the 10th highest peak in the world, Annapurna I (8,091m), and the 7th highest, Dhaulagiri (8,167 m). You take a break at a place called Eklaibhatti some thirty minutes away where you can have lunch. About three hours later, you will be in Kagbeni which has an old and dilapidated fort and a red gompa (monastery) that are worth visiting. The gompa’s rooftop is an excellent vantage point from where to get a splendid view of the mountain landscape. A walk around the alleys of the old fort might also perk your curiosity.

There’s a lodge that goes by the name of Red House which is quite popular, not only because of its amenities, but also due to its large-sized statue of the Buddha and a lovely temple. A night’s rest is called for now. After breakfast the next day, you start off for Chele (3.800 m), your ultimate destination this time. Straightaway, you start climbing up the cliff on the gorge’s eastern side, and the further up you go, the better become the scenery down below. This is the high ridge top-trail. Generally, the trail goes along the side of the valley sometimes, and through the riverbed at other times. 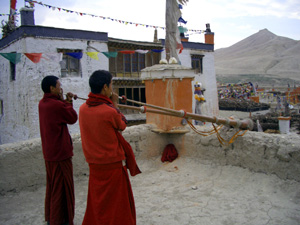 Of course, walking along the riverbed is easier rather than going up and down the side of the valley. You pass Nyingmapa Gompa Kang on the way before reaching a place called Tangbe some two and a half hours later. It’s a typical little Mustang village, full of black, white, and red chortens, and with plenty of narrow alleys between whitewashed houses. The area around the village is picturesque because of the apple orchards and buckwheat and barley fields. Mustang is famous for its apples, it must be noted here.

The hiking is now both uphill and downhill in equal measure before you reach Chhusang where you take a much needed respite along with a hearty lunch. After a short rest, you start off again, this time through a riverbed initially, and later, along a side of the valley. By and by, you’ll reach a bridge that’s located at the bottom of Chele. Now, having crossed the bridge, as you climb out of the valley, you pass spectacular eroded red cliffs having innumerable caves, most of which are completely inaccessible. The climb now is pretty steep before you reach your destination for the day, that is, Chele. At Chele, you realize the true extent of Tibetan influence in the region. You’ll come across some fearsome Tibetan mastiffs in some of the houses, many of which have sheep horns above doorways. These are believed to ward away evil spirits. You’ll also see more of Chinese goods here than Nepali, this region after all having a long history of trade with Tibet, which continues to this day.