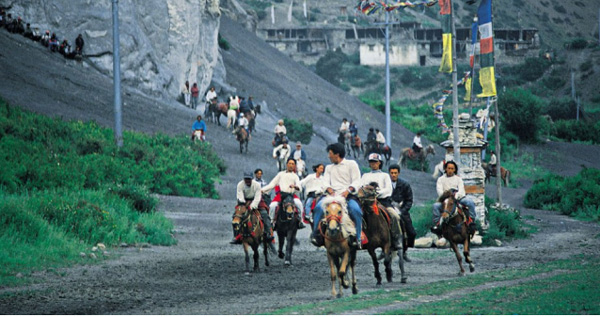 The bond between men and horses in the Himalayan region of Nepal and elsewhere in places like Tibet and central Asia is a special one. This relationship is a throwback to the days when the next village or the next country were an enemy and wars were frequent. In those days, the most trusted friend for the warrior was his sword and his faithful steed.

Horses are an important part of the culture and landscape in Manang and though the wars have ended, the relation between the two have endured. Every year, people in different villages in Manang district celebrate this bond in a colorful and exhilarating festival called Yertung.

The scenario is thus – the horses have been left to graze on their own in the forests and grasslands of the mountains for nearly four months as the fields are taken up by the crops. After the harvest is brought in, it is time to bring the horses back into the village. Yertung marks this renewal of tie between men and horses in a blazing test of courage, endurance and trust.

The villagers, now transformed into warriors again, compete against each other and though there are no prizes to be won, there is a unspoken acknowledgement of the best man and his best horse. 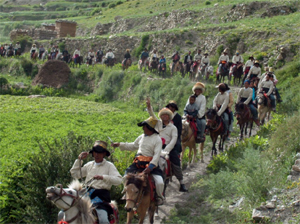 Yertung is a ritual steeped in customs and traditions and beside the actual running of the horses, the festivities at first take on a somber air of warriors going to battle and then change to one of gaiety with traditional singing and dancing at the end.

There are still places and festivals in the mountains of Asia that transports visitors back to the ancient days when life was less complicated. Manang is one such place – it is old, it is rugged and it is very beautiful. In this backdrop the Yertung horse festival inspires visions of Central Asian hordes as they rampaged and plundered through half the world under the thundering hooves of their trusted horses many centuries ago.

Join us as IRONRIDERS on your iron-horse on this trip to Manang. FYI, the road going into Manang is a new one and as such is not blacktopped but is a mud and graveled track. There are five or six sections very short sections of the road which can be difficult to maneuver but not undoable as locals on motorbikes ply the route every day.

For the ride, we will have a very experienced road captain and equally experienced and good rear riders to offer any support along the way. The ride will be backed up by a support team consisting of mechanics and logisticians who will come equipped will all the necessary spare parts and good cheers and beers.

Cost does not include:
– Petrol
– Alcohol
– Bottled water other than at mealtimes.
– Spare parts even on hired bikes
– Other expenses of a personal nature.ired bikes.

For more details mail us at [email protected]