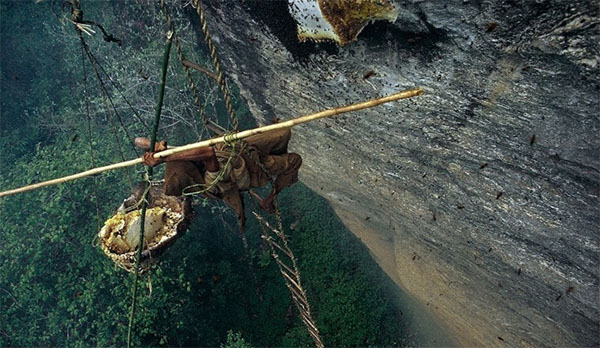 Honey hunting involves gathering honey from the nests of wild honey bees, and Nepal is especially rich in honeybee diversity, with at least five different honeybee species found in the country. The art of honey hunting is an ancient practice of aboriginal communities who use equipment made of local materials, especially bamboo and bamboo-based fiber materials. The honey hunters of Nepal usually use the following tools when going honey hunting: prang (long bamboo ladders, some as long as 70 m); tokari (bamboo basket); chhyakhal (basket lining); tango (long bamboo stick with a sickle at one end); saaton (bamboo stick with notched end); chcora (filter); donga (wooden wax pot); dabilo (wooden knife); and different kinds of ropes made of bamboo fibers for different functions, such as uab, pecho  koili cho,  koho cho, tuju, and whibe.

Although honey hunting techniques are different in different regions of the country, the basic method of lighting a fire under the bee cliffs to smoke out the bees from the combs is universal. However, the traditional cultural-religious practices carried out before honey hunting by different communities varies from region to region. Generally, about a dozen men at a time are involved in honey hunting. They carry with them the above mentioned items and go to the cliff where colonies of wild honey bees have built their nests. Before starting, the honey hunters first perform a sacrifice and offer worship to the gods. Then, a fire is built from wood and foliage at the cliff base. The smoke disperses the bees upwards from their combs, thus revealing the brood and honey sections. 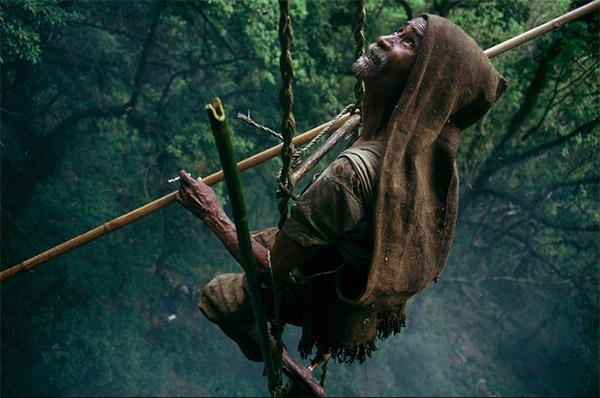 From the top of the cliff, a long rope ladder is flung down. This is secured safely to trees at both top and bottom. A honey hunter, fastened to the ladder with a rope, descends the ladder slowly, while his fellow honey hunters ensure that the descent is safe and coordinated. One person, perched on an overhanging tree, acts as the main coordinator, signaling to the others as and when necessary. A large collecting basket is lowered to the nest site, using another rope. When he is close to the nest, the honey hunter balances the collecting basket under the comb using a long stick. He then separates the brood portion of the comb and pierces a hole in the brood comb area which is then cut using a bamboo stick with a sickle at one end. The collecting basket is guided by him, as well as by the people below holding the rope below, to catch the cut-away honey chunks, and then the basket is lowered once it is full. It is emptied below and then raised again to the site. 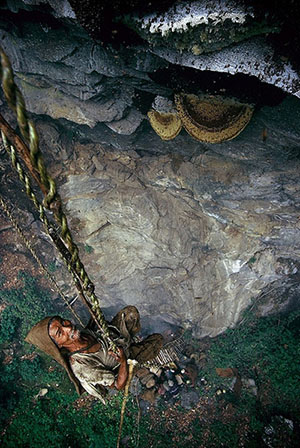 Undoubtedly, it is a time consuming process, and may take anything from two to three hours to harvest just one site. The whole scenario: tall craggy cliffs, wild bee nests, people hanging on rope ladders; the smoke; etc. make for quite a spectacular sight, which has been filmed extensively in Eric Vialli’s famous documentary, The Honey Hunters of Nepal. This film documented the exploits of the Gurung honey hunters of west-central Nepal. As expected of such an ancient aboriginal practice laced with so much risk and danger, there are certain beliefs and superstitions attached to the activity of wild bee hunting in Nepal. For instance, the honey hunters of Nepal believe that honey hunting should not be done on a Wednesday, while Tuesdays is an auspicious day to do so. Similarly, honey hunting is forbidden on the 8th, 11th, 23rd, 26th, and 30th day of the moon cycle, and mornings and evenings are supposed to be the best times for honey hunting. Some communities do not allow women folk to watch them honey hunting; they believe that their presence aggravate the wild bees’ behavior and make them very dangerous. A sacrifice at the base of the cliff to the cliff god is mandatory, and the main honey hunter get the head of the sacrificed animal. As for the group, it should not include any honey hunter whose wife is in her period at the time, or if she is over six months’ pregnant.

Besides the obvious drama of the dangerous practice of honey hunting in Nepal, another striking thing about honey hunting in Nepal is that most of the honey so collected is from the nests of the world’s largest honeybee, Apis laboriosa, and some of the more giant honeycombs can contain as many as two million of these wild bees! If you would like to watch this awesome activity, you should ask your travel agency to arrange one for you, and most probably, a honey hunting tour would be organized for you in the Annapurna region, where there are many sites where honey hunting is done regularly.  Happy honey hunting!