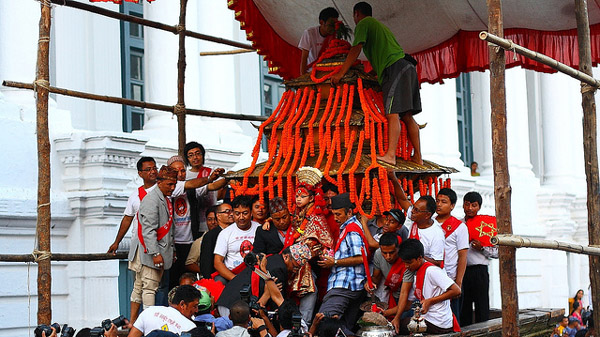 If you are in Kathmandu around the second week of September(8th September 2014, this year), you’ll be able to participate in a pretty lavish Nepali festival, Indra Jatra, that goes on and on for eight days. What’s more, the setting of the Indra Jatra festival is one of Nepal’s most famous world heritage monument zones, the Kathmandu Durbar Square, also known as Hanuman Dhoka, that’s situated slam bang in the center of the city.

Known as Yenya in the Newari language, meaning “Kathmandu festival”, Indra Jatra is a festival of the Newars, the original inhabitants of the Kathmandu valley. It is said to have been established in the 10th century by King Gunkama Dev to commemorate the founding of Kathmandu city. The main highlight of the festival is the procession of chariots of Living Goddess Kumari, Lord Ganesh, and Lord Bhairava that takes place over a period of three days through the streets of old Kathmandu. Of course, there are also lots of dances and pageantry throughout the eight days of the festival. The dances are mostly performed by masked dancers who enact various mythical tales of gods and demons, and in fact, Indra Jatra is one festival during which one can witness most of the famous traditional dances performed by skilled dancers. 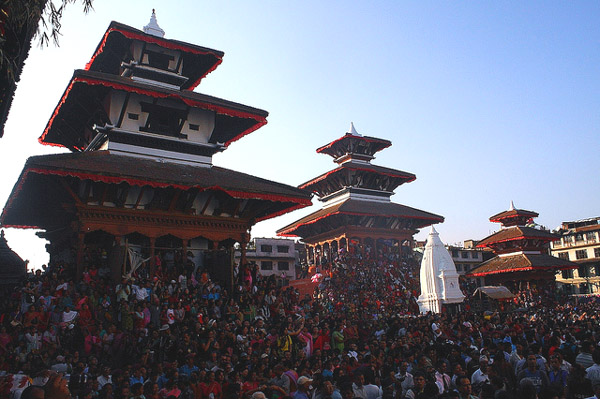 The start of Indra Jatra begins with the erection of a linga, a tall pole derived from a tree trunk from the forest near Nala, some 29 km from the capital, with the banner of Lord Indra, the God of Rain, fluttering from its top. One can say here that, this, the erecting of the linga, can be assumed to be a symbolic gesture to inform everybody that the king is in residence and that he rules over the land without question. On the first day, too, people light incense sticks at various temples in remembrance of deceased family members. This is also a regular feature of most festivals in the country, whereby, before beginning festivities, the deceased are remembered. Considering that the two greatest Hindu festivals, Dashain and Tihar, are just around the corner, immediately following Indra Jatra, it’s a good time to pay one’s respects to those no more alive, and to thus partake in the coming celebrations with an easy heart.

The chariot procession begins on the third day of Indra Jatra with the main chariot carrying the Living Goddess Kumari, followed by chariots of Lord Ganesh, the elephant-headed son of Lord Shiva and Goddess Parvati, and Lord Bhairava, an incarnation of Shiva. This procession makes its way around the city for three days, and is witnessed by the Head of State long with the council of ministers and other dignitaries, both national and international. Till about a decade ago, before the overthrow of royalty, the King of Nepal would witness the procession and pay his homage to the Kumari. However, now it is the President of Nepal who fulfills this role. Here, one can speculate that this age-old tradition of paying homage to a god essentially of the valley’s Newars, that is, the Living Goddess Kumari, could be said to be the kings’ way of maintaining good relations with the valley inhabitants. Considering that the valley was conquered by a Gurkha king, Prithvi Narayan Shah, and ruled by his descendants, this was certainly an important occasion to keep the Newars in good spirits and make things easier as far as governance was concerned. 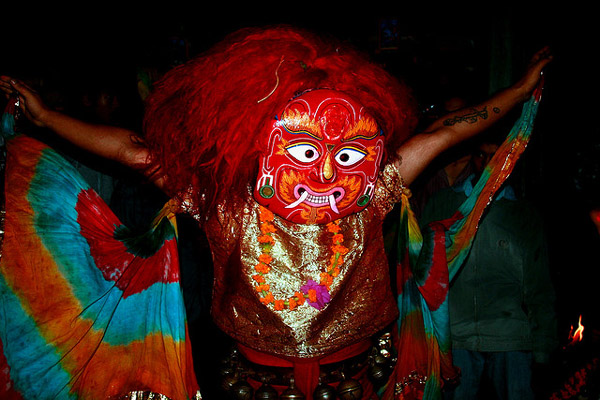 Now, along with everything else, Indra Jatra festival is a festival of dances and dramas. Some of the more intriguing dances are the Majipa Lakhey (a dance of the demons), Sawa Bhakku (a dance depicting the blue incarnation of Bhairava holding a sword and with two attendants in red); Devi Pykhan (a masked dance drama depicting various deities); and Mahakali Pykhan, featuring dancers dressed as black furred creatures known as khyaks, and pretty comic in nature with a lot of antics and fooling around. In addition to these, many other dramas are also held at various street corners around the valley, in the age old tradition known as Dabu Pyākhan, and a tableau known as Dus Avatar is presented at temples portraying the 10 incarnations of Lord Vishnu.

Another highlight of the Indra Jatra festival is the ritual display of the giant mask of Sweta Bhairava in Hanuman Dhoka, through the mouth of which flows a steady stream of alcohol and rice beer on different days, and which spectators get to have their fill of. Another equally large mask, that of Akash Bhairava, is also displayed during Indra Jatra at Indra Chowk, where every night, groups of musicians gather to sing hymns. All in all, the Indra Jatra festival certainly lives up to its reputation as one of the valley’s greatest festivals, and you can be sure of a thrilling time if you are lucky enough to be here during that time. The bringing down of the linga on the eight day signifies the end of this greatest of Newari festivals, and certainly one of the most colorful festivals of Nepal.