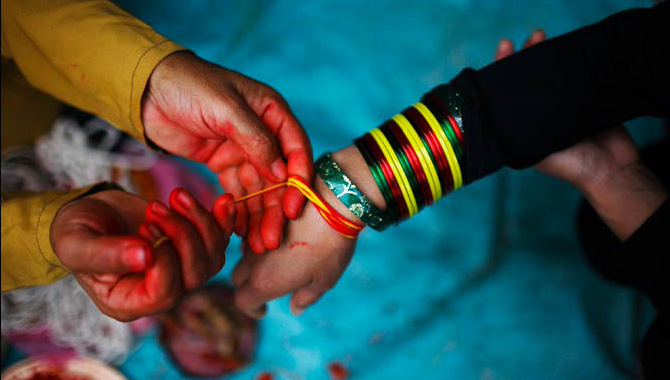 As is well known, Nepal has an abundance of colourful festivals. It may also be clear by now that all such festivals revolve around the different phases of the moon. Which is natural, considering that the Bikram Sambat calendar used in Nepal is also a lunar calendar. In this vein, the full moon day of 10th August 2014 this year (and the same, or a day, near to it every year) is an important day of the calendar, having as it does, a couple of important events.

The most important is called Janai Purnima. Brahmins change their janai (sacred thread) once a year on this day while other Hindus have a sacred thread tied around their wrists. For the Brahmins, it’s an affirmation of their status, while in the case of the latter, the thread around their wrist is supposed to offer them protection against all ills. Most people keep the thread on for at least three months,  until Laxmi Puja, when it is taken off to be tied around a cow’s tail, a deed that assures a smooth journey to heaven since, after you die, you’ll be able to hang on to it as the cow pulls you across the Baitarni River on the way. Well, the tales are as tall as the mountains, you’ll be saying, but hold on, there’s more to come. The story behind Janai Purnima is taller still!

It goes like this: a demon called Bali—having won Lord Indra’s blessings—became so powerful that it scared the gods to death, who then begged Lord Vishnu to set things right. Now, wise Vishnu, what he does, is this: he goes to Bali in the form of a dwarf and begs for some land to call his own. Bali cannot refuse; he is oath-bound to give charity, but he does want to know about the dwarf’s expectations, and asks, “How much?” The reply is succinct: “As much as I can cover in three strides.” Naturally, Bali is pleased because the dwarf has pretty short legs. “Okay then, sure,” he says. However, to his amazement, the dwarf now begins to grow really big, so much so, that his one stride covers the earth, and the other, heaven. Too late, Bali realizes he has been tricked by Vishnu who now asks him about where next to put his third step. In frustration, Bali cries, “On my head, Lord!”

“Okay, sure,” says Vishnu and promptly fulfills his wish. In this way, Bali is pushed deep into hell. During all this, Bali has also been bound with a sacred thread, which explains the priests’ mantra while tying the scared thread around your wrist during Janai Purnima, “Thus I tie the Raksha round your wrist, the same which bound the arm of the mighty Bali, King of the Danavas. May its protection be eternal.’ While the festival is celebrated all over, Gosaikunda Lake (4,315 m) in Rasuwa District, is the most happening place at this time, where hundreds of pilgrims and shamans congregate to take ritual dips in the icy waters. Water from this lake is believed to flow some 60 km southwest to the Kumbheshwar Temple tank in Patan, thereby making this also a lively venue for the occasion.

This day is also when Raksha Bandhan is celebrated (particularly in the Terai) during which girls tie a thread bracelet around their brothers’ wrists, reminding them of their protective duties. Meanwhile, in the Muktinath Temple premises in Mustang, Gurungs and Thakalis observe the Yatung Mela on this day. Drinking and feasting is as much a part of the occasion as is chasing one another on mountain ponies. As for Kathmandu’s Newars, they have a festival called Gunhu Punhi during which a lot of kwati (a soup of nine different beans) is consumed. Frogs in nearby fields are, in the meantime, offered food by women in a ritual called Byanchaa Nakegu (‘feeding the frogs’). All in all, an important day, don’t you think?