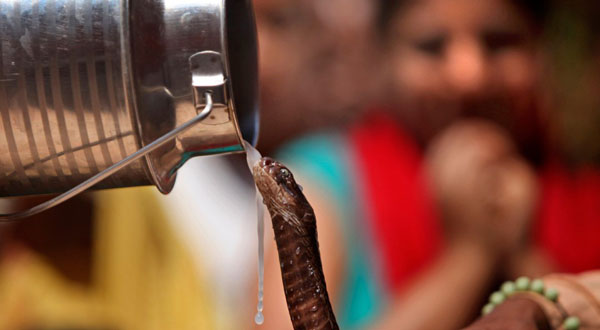 A devotee offers milk to a snake as part of a ritual on Naag Panchami festival. Image: Wodu Media

It is a fact that come the greatest Hindu festival in the country, Dashain, and hundreds of thousands of goats, buffaloes, pigeons, etc. are beheaded at the sacrificial altar of Goddess Kali in a countless number of temples throughout the length and breadth of the country. This is an age-old tradition that occurs on the eighth day of Dashain, i.e. Astami. At the same time, there are many festivals in Nepal during which many different animals are worshipped too. For instance, the crow, the dog, and the cow are worshipped on separate days, during the Tihar festival, soon after Dashain. One could say it is a religion of stark contrasts.

In a similar vein, serpent worship is also a big part of Nepal’s tradition and occurs at different times as a part of different festivals. One such festival is Nag Panchami which is celebrated in the month of Shrawan (July/August), specifically on the fifth day of the bright fortnight(this year 1st August 2014), to commemorate Lord Krishna’s victory over a serpent named Kaliya. Now, this Kaliya was no ordinary serpent, one could say he was more of an anaconda-type reptile, but of monstrous proportions. Actually, this is the legend of Nag Panchami according to the Hindu texts.

According to another myth, this one of more local context, Kathmandu Valley was originally an enormous lake called Nagdaha (Nag: snake deity, daha: lake) which was more of a playground for all sorts of snakes. Came a time when it entered the mind of some enterprising humans that the valley would be a great place to live in, provided they could drain the lake. So, they bent their backs to the huge task. Here, it should be pointed out that this story goes against the grain of another popular myth which describes the sage Manjushree draining the massive lake using his sword to carve out a passage in Chobar.

Anyway, leaving Manjushree aside, the moment the humans began draining the lake, the serpents (nagas) were roused from their everyday slumber. In other words, they became furious; furious nagas are dangerous, as everybody knows. Add to this the fact that they had power over the rains, and the picture didn’t look too good. In their rage, they decided to stop any rain from falling on the valley, thus plunging the entire area into a state of severe drought.

The humans were panic-stricken and looked around to see if anybody could help them pacify the serpents’ wrath. Fortunately, a king came forward to do so, no ordinary king this, but one who had all sorts of tantric powers. Using his great powers, the king forced the nagas to allow rain to fall again on the valley. At the same time, being a tantric himself, he well understood that the serpents had great powers which deserved to be recognized. So, he ordered that the fifth day of the month of Shrawan should be designated as Nag Panchami, a day to worship the nagas. Additionally, understanding that the serpents would need some suitable place to live in, he decreed that certain lakes in the valley should be considered as safe refuge for the nagas. Taudaha in Kathmandu, and Nagdaha in Lalitpur were deemed to be the most suitable for the purpose.

Taudaha is located about six kilometers southwest of Kathmandu in a place called Chobar. Besides its cultural significance to the valley, it is also important because of its rich diversity of flora and fauna. It is valuable as a wetland resource since it is the valley’s only remaining natural lake that still supports a considerable number of wetland birds. Nagadaha in Dhapakhel VDC of Lalitpur district is a natural pond that covers a large area (around five hectares). The lake and its vicinity is a scenic wonder. Nag Panchami is, of course, the major festival held here, however, it also hosts other big festivals like Rishi Panchami, Janai Purnima, Chhath, and Teej. Then there is a much smaller pond called Nagpokhari in the center of the city (Naxal), on the eastern side of the erstwhile royal palace. This pond is quite well preserved with a park around it and a tall statue of a naga king at its center. It too is a focal point for devotees during Nag Panchami.
//