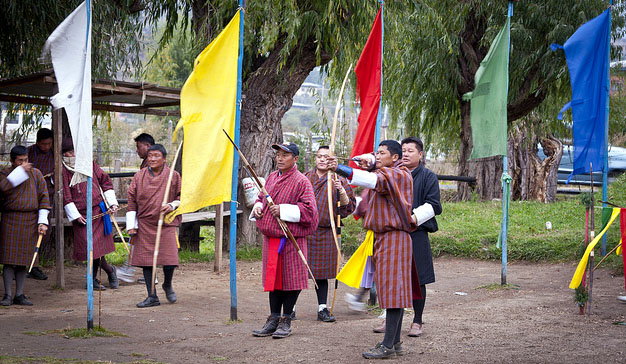 Archery is their favorite sport, and it is one of the few sports that the country participates in at international sporting arenas. Thus, it is to be expected that much care goes into the making of the sport’s implements, namely, the bow and the arrow. The sporting bow measures 72.5 cm in length and weighs around half a kilo, and at its broadest part, is 3.5 cm wide. The grip is called ‘jangshi’, and the bowstring, ‘zhu-tha’. The latter is made from the fibers of the giant stinging nettle known as ‘zoeche’. The arrow is known as ‘dha’ and is 20-25 g in weight and 80 cm in length. Its shaft is made of a reed (‘hema’) found in the country’s foothills. The head (‘dacha’) is one centimeter in diameter, while the arrow’s feathers, of which there are four, come from the back of pheasants. There’s a lot of precise detail and a certain amount of artistry that goes into the making of the Bhutanese bow and arrow. But, like said before, that’s to be expected, after all, archery was declared as the country’s national sport way back in 1971.

Similar is the case with their national dress. It is another aspect of the Bhutanese people that gives them an identity that is singularly unique and proudly Bhutanese. Men wear a dress known as the ‘gho’. It is a knee-length dress that is robe like in nature and tied at the waist with a ‘kera’, a belt made of cloth.  Most Bhutanese wear long boots, and that goes very well with the ‘gho’, one must say. As for the ladies, they wear a dress called the ‘kira’. It is an ankle-length dress which is clipped at one shoulder and tied at the waist. Beneath the ‘kira’ is worn a long-sleeved blouse called the ‘toego’. Although every Bhutanese man wears a ‘gho’, and all women, the ‘kira’, social status determines things like the texture, colors, and decorations. Scarves and shawls also perform a similar function; their color is determinant of class and social standing.  However, no matter what textures, colors, and decorations are used, one thing is common—they are all made mostly of handloom fabrics. Now, imagine if you will, the Bhutanese man in his manly ‘gho’ and the Bhutanese woman in her beautiful ‘kira’; and you will agree that Bhutan perhaps must have some of the best dressed people in the world.

Speaking specifically about the three most prevalent communities, the Tshanglas (also known as Sharchops) live in eastern Bhutan; in Mongar, Trashigang, Samdrup Jonghkar, Pema Gasthel, and Trashiyangte. They are considered to be aborigines, and they are, on the whole, farmers. However, their women folk are highly reputed for weaving some really fine stuff, mainly of silk and raw silk. The Ngalops inhabit the six regions of western Bhutan. They originated from Tibet and their language is known as Ngalopkha, which is similar to the national language, that is, Dzongkha, but more polished. Agriculture is their mainstay as well. The Ngalops are famous for the uniqueness of their dances. As for the Lhotshampas, they are to be found in the country’s southern foothills. Most of them are believed to have migrated from Nepal a couple of centuries ago. The language they speak, Nepali, is called Lhotshamkha in Bhutan. Basically, all their customs are similar to that of the Nepalis of Nepal.

Speaking about the other communities, the Bumthaps, Khengpas, and Mangdeps live in the central region of the country. They are into farming and also do a fair bit of animal husbandry as well, besides producing wool and yak hair fabrics. The Khengpas are well known as skilled bamboo and cane craftsmen. The Kurtoeps inhabit the country’s eastern region, particularly villages along the banks of the Kurichu River in Lhuentse district. The Brokpas and the Bramis live at higher altitudes in two villages of eastern Bhutan, Merak and Sakteng. They rear yaks and sheep, are skilled in cane and bamboo craft, and wear dresses made of yak hair and sheep wool. The Layaps also live at very high altitudes in the extreme north, and they too rear yaks and sheep. The Doyas are to be found mostly in southern Bhutan, where they are believed to have migrated down the years from western and central Bhutan. The Monpas live in Rukha in Wangdue Phodrang district, and they are a pretty small community.

Well, all this should give you a good idea of the rich diversity of the Dragon Kingdom. Aside from the fact that it is a peaceful country, Bhutan is also a nation of proud people with a unique identity of their own.