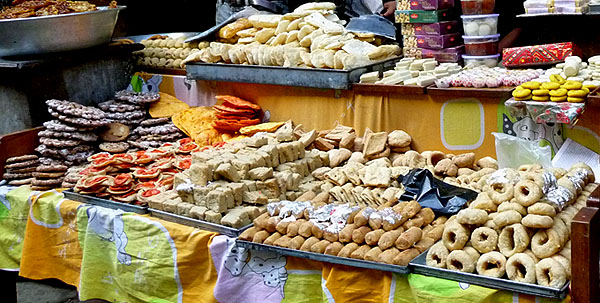 Kathmandu is an ancient city and thus it has a lot of ancient customs, buildings, temples, and so on. Kathmandu also has quite a few ancient shops, of which many are concentrated around the Asan Bazar, the commercial heart of the Capital. One such shop is the Ganesh Mandir Pachadi ko Mithai Pasal (The Sweetmeat Shop Behind Ganesh Temple) run Laxmi Shrestha, a middle aged lady who is single handedly and determinedly, keeping some ancient cuisine, that is, Newari sweetmeats, alive. Business is good during festivals and she is satisfied with what she is doing in spite of other family members not taking much of an interest in its running. The shop has been around for at least the last 50 years but how much longer is anybody’s guess. As for the proprietress’s own opinion: “As long as my health allows me to.”

Beside this shop, there are other shops, notably, a half dozen or so ghyao-tel pasals (ghee-oil shops) in the famous bazaar that have been around for generations. However, aside from these shops in Asan Bazaar, Ganesh Mandir Pachadi ko Mithai Pasal is only one of a few traditional sweetmeat shops in the area. You will find some of the really old ones opposite Kasthamandap Temple in Maru Tole near Hanuman Dhoka Square in Basantpur. Such mithai pasals have been the prerogative of the Rajkarnikar clan (a Newar clan) down the ages. Since time immemorial, these shops have always been known as Maari Pasals (bread shops) by local inhabitants and a daily to-be-visited shop for buying breakfast and snacks. Here one must remember that bread loaves made their presence felt in the Valley only during the mid 70s with the advent of the Krishna Pauroti Bhandar in Kamaladi, Kathmandu.

Coming back to the Maari Pasals, one must explain that ‘maari’ doesn’t refer to just any one type of bread. Maari can be of various kinds: for example, selroti, khajur, rodh, aanti, aainhthi, fini, Punjabi, puri, khasta, gajur, etc. etc. But, no matter what name they go by, you can be sure that each is as delicious as the next. Indeed, the making of maari is a good indication of the cuisine artistry of the Newars of the Kathmandu Valley, a people known as much for their love of festivals as for their many delicious dishes. Indeed, a maari pasal is no ordinary pasal (shop). Recipes handed down through generations and many skillful hands play a key role in their making.

According to locals, Purna Das Rajkarnikar was responsible for establishing one of the oldest such shops way back in 1880. It is now called Purna Ashok Mithai Pasal. The fourth generation of the family, 50-year-old Yogendra runs it today. Purna Ashok Mithai Pasal has a big reputation to live up to, having as it does still, a sizeable number of loyal customers. But, judging by their popularity and the locals’ high esteem of their products, one can assume that purity, honesty and dependability continue to be the traditional norms of its business. An interesting item to be found in such shops is known as waasa: (literally, medicine, and sutkeri masala in Nepali). According to the salesman there, Waasa: which costs Rs.1000 per kilo, is part of the post partum diet for new mothers. It is a highly nutritious mix of gund (edible gum), dry fruits, battisa (mixture of 32 herbs), jwano (thyme), methi (fenugreek) and sounf (dill). Considered a potent concoction that imparts almost all the essential nutrients in concentrated amounts, it is taken dissolved in milk or water.

This shop is one of perhaps a dozen or so in the area, but if one were to look around the valley, one would notice many similar shops selling traditional Newari sweetmeats in addition to confectionary and maari. All might not be as ancient as those mentioned above, but most definitely, all are at it keeping an ancient traditional cuisine alive and kicking in the valley. One such shop in particular that must be mentioned is the once famous Ram Bhandar in Thapathali of Kathmandu. It has now been segregated into two shops in the same area. Ram Bhandar enjoyed a superlative reputation once upon a time and especially before the establishment of more alluring sweetmeat shops by people of Indian origin. There was once a time when Ram Bhandar was it if you were buying sweetmeats for feasts or festivals.