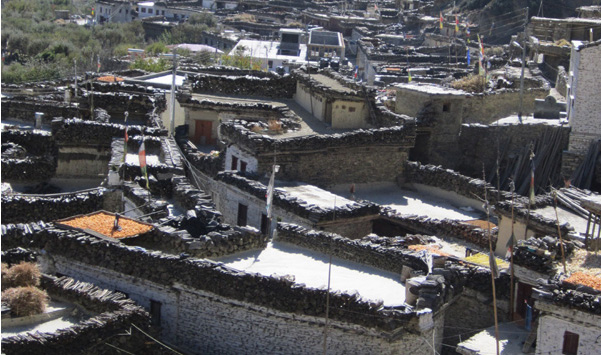 The village of Marpha is located at an altitude of 2,650 meters in the Kali Gandaki valley of the Annapurna Conservation Region in Mustang District in northern Nepal. Keeping in mind its remoteness and its barren terrain, one must say that the village is suitably named (‘Mar” stands for hard-working and ‘pha’ means people). The region is no place for those with a soft life in mind! It is inhabited by the redoubtable Thakalis, a clan that is as industrious as it is enterprising. Before 1959, most of the locals were in the salt trading business, dealing with China and Tibet. Tourism and mule rearing have also always been important occupations here. 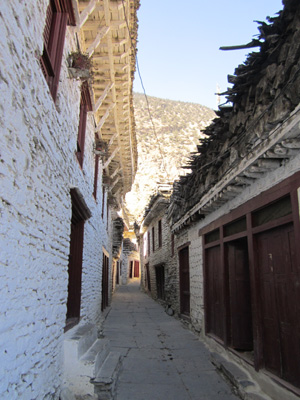 Today, many locals, belonging to almost every household, are somehow or the other engaged in the farming of apples. How did this turn of events come to be? Well, credit it to the establishment of the Horticultural Farm that was established here in 1966. It went on to bring about a minor revolution in the region by introducing various varieties of apples along with proven production methods. Today, the result of the farm’s untiring efforts is there for all to see. Marpha is now also known as the ‘Village of Orchards’. Its apples are known all over the country as being especially delicious. What’s more, Marpha’s apple brandy too is as famous. Both the apples as well as the brandy can now also be seen on shelves in the Capital’s supermarkets.

Oh yes, apple has become a mainstay of the region. So much so, that Marpha’s apple pies have become world famous (at least in the world of trekkers who have been to the area). In fact, so reputed are Marpha’s apple pies, that the Jomsom Trek is often referred to as ‘The Apple Pie Trek’. Lots of tourists passing Marpha have been delighted to find such succulent pies in so remote an area of the world. It is not only tourists that have been so delighted, many pilgrims too, those on the route to the holy shrine of Muktinath, also have to pass through Marpha, and one can be sure that they will be carrying along dozens of Marphali apples to nourish them along the way. One can also be sure that Marpha brandy will help to provide both trekkers and pilgrims with sound sleep on the cold nights along the trail!