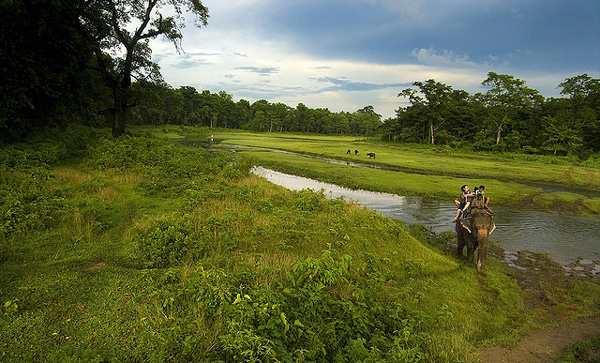 That’s right, a country cannot be fully known and its culture really understood by just looking at its capital city alone. No doubt, Kathmandu is renowned as a World Heritage Site with seven groups of cultural monuments (Monument Zones), that is, Kathmandu Durbar Square, Patan Durbar Square, Bhaktapur Durbar Square, Pasupatinath Temple, Boudhanath Stupa, Swayambhunath Stupa and Changu Narayan Temple. Yes, the capital city was once the destination for backpackers in the 1970s during the heydays of the hippy revolution. And it’s true, Kathmandu is a city where you’ll find plenty to pique your senses. However, all said and done, Nepal is more than just Kathmandu, and it would be a good idea to gain a better understanding of the country as a whole. Accordingly, here are some tidbits on some interesting places outside the valley.

No business worth its name can do without having an office in this bustling business town, that’s what is usually said. Close to the border town of Raxaul in Bihar State of India, Birgunj was, not too long ago, a characteristically rough border town. It has since then, developed into the commercial hub of the country. Birgunj is very close to Kathmandu by air, just a 15-minute flight. Most domestic operators have regular flights to Simara, some 20 km from Birgunj. However, if you aren’t in a hurry, going by road is highly recommended since, this way, you get to see a lot of the country outside the valley of Kathmandu. The 300-km drive takes roughly six hours by car (9-10 h by bus), and, except during the rainy season, you are assured of a smooth ride, the road being pretty spic and span. Most of the way, you’ll be driving beside the serene Trishuli River; plenty of scenic landscapes on the way.

There’s another road as well, the old Tribhuvan Highway. Well, this ride is quite an exciting one as it’s a mountain highway that’s not much used nowadays and so sections of it could be in a dilapidated state at times. Otherwise, it’s a really outstanding way to travel; you’ll be going up and down a winding road that’s quite narrow; plenty of hairpin bends. Could be hair-raising at times, but that’s excitement! There’s another much shorter route to Birgunj from Kathmandu which goes through the Kulekhani reservoir. However, it’s for those with a strong heart, and perhaps in a tearing hurry. Mostly, four-wheel jeeps ply this road.

If you have taken the flight to Simara, then you get to drive the rest of the way through an industrial corridor between Pathlaiya and Birgunj. Plenty of factories and warehouses line both sides of the road. Birgunj is a sprawling town with many hotels and shopping outlets which attract people from across the border, just as Raxaul attracts people from this side, especially during the wedding season to buy wedding sarees mostly. The weather here is pretty hot nine months of the year, and so it’s a good idea to go there during the winter months. There might not be much to see strictly from a tourist’s point of view, but it’s a town that holds great significance because it is one of the most important cities of Nepal’s Terai, and interacting with the locals (mostly Madhesis) and experiencing their lifestyle could be an eye-opener for those who mostly identify the country with the hills and mountains and the lifestyle of the people there. Oh yes, Birgunj will most definitely give you a better perspective of the country as a whole.

When driving down to Birgunj, you know you are close when you reach Hetauda, since this town is only about an hour away. It’s the administrative headquarters for Makwanpur District. If you go via the old Tribhuvan Highway, it’s about 132 km from Kathmandu, Along the East –West Highway, which is much more in use today, it should take you about five hours to reach there from the capital by car. The road via the Kulekhani reservoir and Bhimphedi is also becoming busier by the day with hundreds of jeeps ferrying passengers to and from Kathmandu (only two hours).  Plans are on to construct still better and shorter roads to the capital, which augurs well for the town’s future. Enclosed by three rivers (the major one being the Rapti River), Hetauda is an important industrial town. Some also say that it is one of the greenest cities in Nepal. Situated in a valley, it is surrounded by the Mahabharata range in the north and the Siwalik range in the south. Lots of greenery guaranteed. All this makes Hetauda an important town, the importance of which is destined to grow even more in the near future.

Chitwan District in Narayani Zone is about 120 km away from Kathmandu by road, and it is world famous for its Chitwan National Park, Nepal’s first such park. Spread out over some 932 km2 of lush green forests, the park was designated a UNESCO World Heritage Property in 1984 under the ‘natural’ category. The park has more than 43 mammalian species, over 450 bird species, and more than 45 species of reptiles and amphibians. It is home to the Royal Bengal tiger, the one-horned rhino, and the gharial, all three of which are endangered species. It is also home to wild elephants, several species of deer and monkeys, leopards, mugger crocodiles, Indian rock pythons, striped hyenas, pangolins, the four-horned antelope, etc. 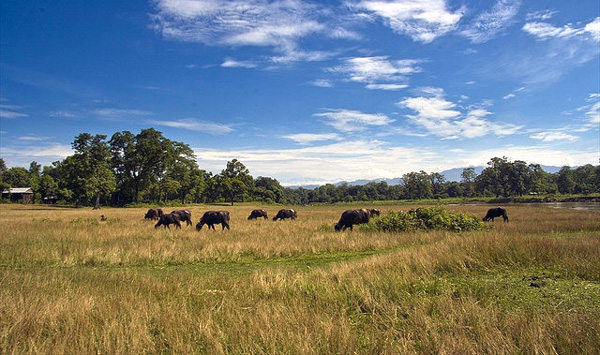 Of the approximately 2,000 one-horned rhinos in the wild today throughout the world, about 500 live in the Chitwan National Park. They are huge beasts, weighing up to 2,700 kg each. And, out of 3,250-4,700 Royal Bengal tigers in the Indian sub-continent, 150 to 250 can be found in Nepal’s three protected zones, including Chitwan National Park. Regal in appearance, their roar can be a heard a mile away. As for the gharial, it is a rare crocodile that is about five to six meters in length. Mature males have a bulbous growth on their nose.

The park is also a bird watcher’s paradise, with many endangered species like the Giant Hornbill, the Bengal Florican, the Black and White Storks, and the Lesser Florican, as well as more common birds like red jungle fowls, pea fowls, and various species of herons, flycatchers, egrets, kingfishers, and woodpeckers. March and December are the said to be the best months for bird watching. There’s plenty to do around Chitwan, including elephant and canoe rides and jungle walks, and there’s plenty of fantastic resorts as well to relax and rejuvenate in after a hot and tiring day.