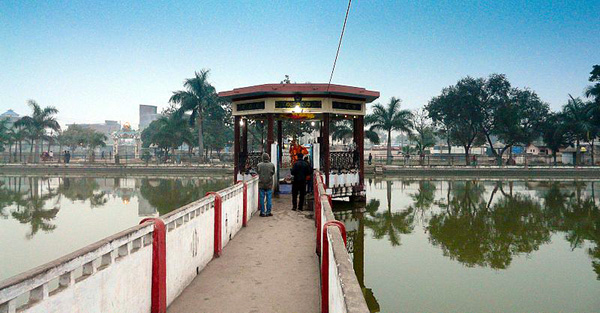 In the 1970s, Birgunj, one of the bigger cities of the Terai, was the main entry point for numerous tourists to Nepal. They traveled through India, and having had their fill of the exoticness of that huge country and its large mass of humanity, made a beeline for the Shangri La of yore, that is, Nepal, to get a much needed breather. Most tourists coming then were young backpackers, and Nepal held a special appeal for them, for those were the days when the capital of the country, Kathmandu, was world famous as a city where one could live the hippy life to the full: cheap hotels, meals at throwaway prices, and of course hashish, which one could buy and smoke anywhere. In addition, the environment was clean and unpolluted, for there were hardly any cars to speak of. Indeed, Kathmandu was Kathmandu—a city like no other on this planet. And, did those young backpackers love Kathmandu!

Its legendary status perhaps could have a bearing on why most tourists who come to Nepal still, more or less, limit their stay here to the capital and its vicinity, that is, mostly inside Kathmandu Valley, with maybe a jaunt to Pokhara. However, things have changed over the past three decades. Kathmandu, sad to say, is no more the pristine Kathmandu of the 1970s, which needless to say, tourists find out sooner than later; in fact, from the moment they land at the Tribhuvan International Airport. Blame it on urbanization. Blame it on modernization. Anyway, that’s not say that the capital hasn’t retained some of its charms. The weather in the valley is as pleasant as could be throughout the year, and the seven World Monument Zones that go to make the valley a World Heritage Site, continue to fascinate one and all.

Still, all said and done, it makes sense to get out of the valley now and then when visiting Nepal. And, you could even start by entering the country through some other entry point than the usual, especially if you are coming in from India. For your information, there are six entry points into Nepal from India open to foreigners. You can enter Nepal through Kakarbhitta in the east; Sunauli in the mid-west; Mahendranagar, Dhangadhi, and Nepalgunj in the west; and Birganj in the central region. There are direct buses to the Nepal border from Delhi, Varanasi, Calcutta, Patna, and Darjeeling. Likewise, there are trains too. Here are some cities you get to see when coming in from the east and the west.

City of Politics and Business, Biratnagar

It is a fact that this city has produced more prime ministers of the country than any other city, including the capital. And, umpteen number of ministers too. Reading this, one is likely to think that there’s a lot of political goings-on in Biratnagar. Well, that’s true, but equally true is that this city has some of the biggest names in business and industry. The largest city of the country after Kathmandu, Biratnagar is some three hours away from Kakarbhitta, the eastern-most entry point. The reason you could be going there is because you might not fancy a night-long (and some!) bus ride to Kathmandu; and Biratnagar is from where you get to catch a 45-minute flight to the capital. Biratnagar is not on the highway, so you take a left turn at Itahari, a fast growing town that is one of the important junctions of the East-West Highway. As you drive down to Biratnagar on an excellent road, you’ll see plenty of factories along both sides of the road, which all have their main offices in Biratnagar. Forty-five minutes or so later, you should find yourself safely ensconced in one of the many good hotels there.

Practically the capital of eastern Nepal, the weather is hot and muggy, and in sync, the lifestyle of most of its inhabitants is also generally laidback. This could also be because the city has a lot of old-fashioned feudal style zamindars who hold large tracts of agricultural land in and around the city. Many are loath to abandon their age-old way of life; a life lived in large mansions surrounded day and night by servants, and with peasants tilling their substantial fields. And, as mentioned before, Biratnagar is also home to many business icons who own some of the country’s largest commercial organizations. Perhaps it is fitting that Biratnagar has some of the richest businessmen and some of the most influential politicians, money and politics do go well together, don’t they?

The Link to the Far West, Nepalgunj

Now, if you enter the country through Nepalgunj, you’ll find yourself in a sprawling city that is the administrative headquarters of Banke District. As with other border towns, since the city borders Uttar Pradesh State of India, here too one will find a lot of the Indian state’s cultural influence in Nepalgunj, including the language known as Oudh. Nepalgunj has an important role to play in distribution of essential and other supplies to the far-western region which is the least developed in the entire country. There are many warehouses in Nepalgunj holding supplies from the rest of the country, their ultimate destination being towns and villages (some quite remote) in the far west. Many such remote areas have no road linkages and so supplies have to be air lifted.

This is why the Nepalgunj airport is quite a busy one, with many flights taking place daily, not only to and from Kathmandu, but also from here to remote areas such as Rukum, Dolpa, Jumla, and Mugu,. While on this, it should be noted that the journey by air from Nepalgunj to Kathmandu takes some 1 hour and 10 minutes. Buses ply regularly to the capital as well, but again, it’s quite a long haul, as it were. Of course, now that you are here, you would like to spend a night at least, and to put your worries to rest, there are some fine hotels here. As you stroll around in the evening, you’ll come across a place called Dhumboji which is the heart of the city. Here you will find the most important traffic junction of Nepalgunj, Birendra Chowk, which is the main business center of the city. This chowk is famous for its eateries serving local delicacies.  The airport is about six kilometers north from his junction.

Now, while you are in the city, why not take the one-hour drive to the Bardiya National Park? Established in 1988, the beautiful park covers an area an area of 968 square kilometers. It’s rich in flora and fauna, with over 50 species of mammals, 405 species of birds, and 839 species of flora. In addition, 125 species of fish have been recorded in the Karnali River that flows through Bardiya as also 23 reptile and amphibian species including mugger and gharial crocodiles. Oh yes, you’ll come back thinking, “Now, that was a nice outing!”