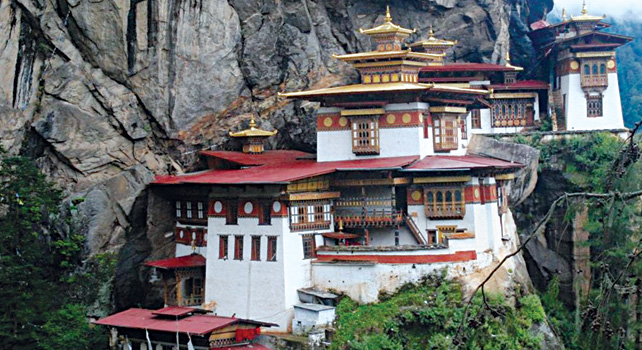 This is small kingdom is one of the world’s last remaining Shangri-La’s.  The country has effectively and courageously combated the ill  effects of rampant globalization and today stands at the forefront of nations active in the preservation of nature’s bounties. Yes, Bhutan is bountiful in natural beauty and rich in culture and tradition. It is no doubt, a Shangri-La.

The Himalayan Kingdom of Bhutan calls itself Druk Yul, Land of the Thunder Dragon. Still in a partly secluded state, Bhutan has retained its reputation as an exclusive destination for select visitors. This has resulted in keeping intact the pristine nature of its surroundings, the proud culture and civilization of its people and the continuity of its deeply rooted religious traditions. Still relatively unknown to most of the world, this charming Himalayan Kingdom remains peacefully nestled in the eastern Himalayas amidst verdant forests and lush green valleys. Nature at its best— that’s Bhutan in a nutshell. 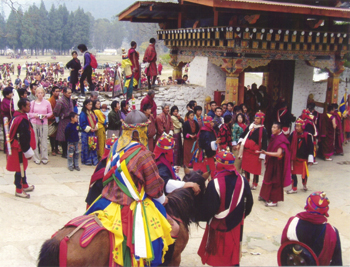 The moment you land at colorful Paro which is overlooked by a dramatic dzong, you will be surprised to see houses so beautiful, they make you stop a moment to view and reflect. All around, you will see forests and fields with isolated farms and tiny hamlets strewn all over the countryside. Nearby Paro are the ruins of Drugyal Dzong, a site of great historical significance. It was from this fortress that the Bhutanese repelled many Tibetan invasions. The name means the victorious Bhutanese. It offers a magnificent vista of Mount Chomolhari, “Mountain of Goddess” (7329 m). A short distance south of the road is Kyichu Lhakhang. This temple is said to be one of the 12 great geomantric temples ordered to be built by King Songtsen Gampo of Tibet in the 7th century. It holds down the left foot of an ogress whose body is so large that it covers Bhutan and most of central Tibet.

The capital Thimphu is a two hour drive away and is noticeably small compared to other capital cities. However it more than makes up for its small size with its majestic bearing. It lies in a wooded valley, sprawling up a hillside on the west bank of the Thimphu River. It is a most restful city to spend some time in. One will come across storefronts along the streets displaying a rich tapestry of Bhutanese handicrafts and textiles. It is also said to be the only capital city in the world that does not have any traffic lights! 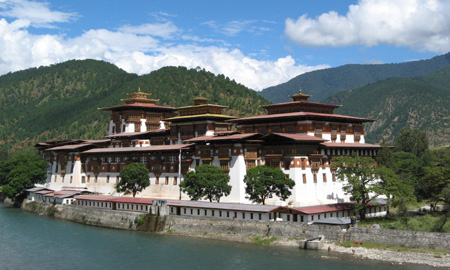 Into the heart of Bhutan

From Thimphu, the three-hour drive to Punakha and Wangdue crosses the Dochula Pass (3150 m), offering a great view of the Eastern Himalayan Mountains. Wangdue Phodrang Dzong is perched on a spur at the confluence of two rivers, Phochu’ (male river) and ‘Mochu’ (female river). It commands an impressive view over both the north-south and east-west roads. The main road climbs the length of the spur and on the left, across the river, comes the first glimpse of the picturesque village of Rinchengang whose inhabitants are celebrated stonemasons. Punakha Dzong is the winter residence of Bhutan’s spiritual leader, the Head Abbot,
and the Central Monastic Body.

It takes almost four hours to drive between the windswept town of Wangdue and Trongsa. The route crosses the Black Mountains via Pele la (3,240m) before entering the Mangde Chhu Valley. Backing on to the mountain and built on several levels, the Dzong fits narrowly on a spur that sticks out into the gorge of the Mangde River and overlooks the routes south and west.

The Bumthang region encompasses four major valleys: Choskhor, Tang, Ura and Chhume. The Dzongs and the most important temples are in the large Choskhor valley, commonly referred to as Bumthang Valley. It would be difficult to find so many important temples and monasteries in such a small area anywhere else in Bhutan. Southeast of Jakar, Ura is the highest of Bumthang’s Valleys with it is quite a large village, dominated by the Lhakhang. About 40 closely packed houses line the cobblestone streets, giving the town a medieval atmosphere. 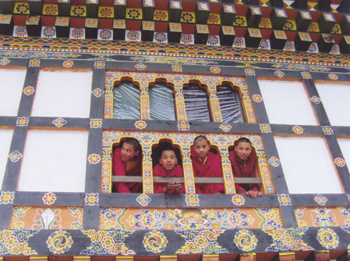 Retracing the route towards Trongsa and Wangdue the road diverts to Gangtey Valley. The valley is a designated conservation area and borders the Black Mountains National Park. Because of the large flock of black-necked cranes that winter here, it is one of the most important wildlife preserves in the country. In addition to the cranes, there are also muntjacks (barking deer), wild boars, sambars, Himalayan black bears, leopards and black foxes in the valley and surrounding hills. Gangtey Gomba overlooks the large green expanse of the Phobjikha Valley.

Taktsang is the most famous of all Bhutanese monasteries. It is perched on the side of a cliff 900m above the floor of the Paro valley, where the only sounds are the murmurs of the wind, and water and the chanting of the monks. The name Taktsang means ‘Tigers Nest’; the Guru is said to have flown on the back of a tigress to the site of the monastery where he meditated in a cave for three months. The monastery itself is closed to tourists except by special permit. The one-hour walk up to the viewpoint, where there is a small wooden teahouse provides a close-up view of the monastery.

Indeed, this small Himalayan Kingdom promises much and what’s more, it delivers on all counts!

Article by: Amar B Shrestha