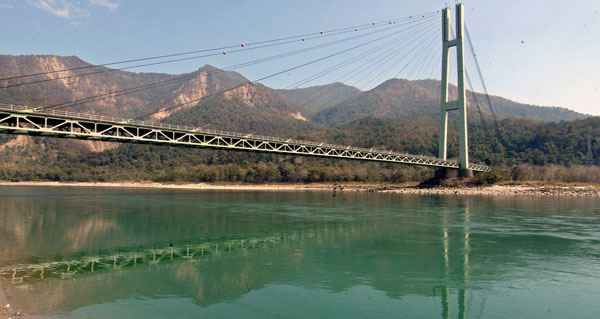 You have been to Nepal. You have seen the Himalayas, done the Annapurna Circuit trek, seen the sights in and around Kathmandu Valley, and picked up a few new friends along with some souvenirs in Thamel and Durbar Marg.  Fine, you’ve done a lot, collected lots of good memories. But, have you seen the Karnali Bridge over the Karnali River in Chisapani? Bet you haven’t! On the other hand, you could have, if you had visited the Bardiya National Park in far west Nepal. Well, Chisapani is not far from this famous park.

This is where you’ll see a bridge that’s one of only a handful of such bridges in the world. It is five hundred meters long.  Designed by British and Japanese engineers, the construction was done by Kawasaki of Japan. This bridge is aesthetically very pleasing, and awe-inspiring as well, due to its graceful design and the strength it projects. Black cables, paneled and close to each other, project out of slim turret-like steel structures at the sides, passing through pigeon-hole like openings in horizontal lines at the top of a high steel and concrete tower set on a strong concrete foundation at the center of the bridge. These cables end in similar turret-like steel structures on the other side. It seems that the two halves of the bridge are balanced and held up by their own weights with the help of those tough black steel cables with the tall tower acting as a pivot. A fine act of balance, creativity, and ingenuity, not to mention, artistry.

This bridge in particular reinforced my already favorable impression of the far west I got from my stay in Mahendranagar and Dhangadi. I had taken the almost two hour flight from Kathmandu to Dhangadi, stayed there for a night, and then continued on to Mahendranagar on a two-hour journey by bus. Dhangadi is an important hub of the far western region of the country, with buses going from here to Syawali Bazaar, the jumping off point for places like Dadeldhura, Baitadi, Dipayal, Doti, and Silgadi, beside others. To reach these remote areas, buses have to pass through Attereya, some 20 km from Dhangadi. In fact, Attereya is the junction from where buses go west to Mahendranagar, north to the above-mentioned remote places, south to Dhangadi, and east to the rest of the country.

My first impression of Mahendranagar was tinged with surprise—there were rows of foreign goods-laden shops lined on both sides of the main street, and many of them were as posh as the shops in Kathmandu. Sundays were supposed to be the busiest days, with lots of shoppers coming from across the border, from places like Kanpur, Bareli, Paliya, etc., and some even from Delhi. Mahendranagar itself is a neat and orderly town in the real sense of the word. There’s a nice park in Mahendranagar that’s pretty well-maintained and with lots of tall trees. At the center is a tall marble pillar that was originally called the Pancha Stupa. Dhangadi also has a similar park, though smaller in size, but which is also pretty nice.

I had half a mind to visit Naini Tal (a charming hill station in India) that is only four hours away from Mahendranagar, but couldn’t manage the time. So I took one of the Kathmandu bound night buses (although they leave at about one thirty in the afternoon) for the 89 km trip to Nepalganj. Before reaching the beautiful place called Chisapani, where the Karnali Bridge is located, we had to traverse numerous rivers on the way. The bus made a stop at Chisapani for refreshments, giving us enough time to admire the one-of-a-kind bridge over the Karnali River. Soon after leaving Chisapani, we drove through the road adjoining the Bardiya National Park. The drive, It must be said was a real pleasure, on account of the smooth road and the dense forest around us. Soon enough, we reached Kohalpur, and then onwards to Nepalganj.