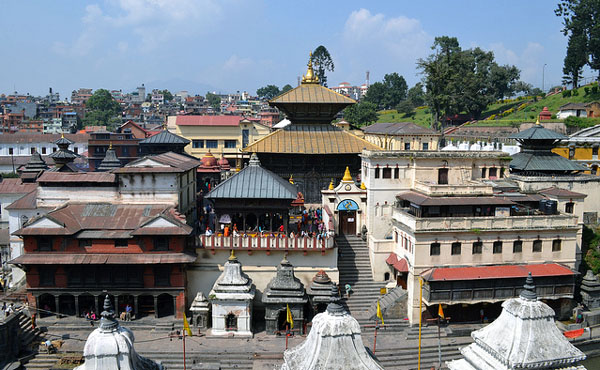 Nepal has the biggest mountains on earth and the most abundant natural beauty. Similarly, Nepal has some of the most sacred shrines which makes it an ideal destination for a spiritual journey and a favored place for religious tours. Eighty percent of the country’s population follow the Hindu faith, and till a decade or so back, Nepal was the only Hindu kingdom on earth. Therefore, it is natural that there are many sacred shrines that make the country a favored destination for those out on Hindu pilgrim tours.

One of the most famous shrines is Pasupatinath Temple in Kathmandu. It has been designated as a world heritage monument by UNESCO and it is one of the must-to-be-visited temples for all Hindus, especially the followers of Lord Shiva (Pashupatinath). The Pashupatinath Temple dates back to A.D. 400 and is considered to be the most sacred temple of Lord Shiva. It houses the four-faced lingum, or phallic symbol, of Shiva that is believed to date back to the 14th century. This iconic temple, situated on the sacred Bagmati River’s banks, is lavishly decorated. It has a two-tiered gold plated roof and silver-embossed doors. Facing the front of the main temple is a bronze figure of Nandi, the bull (Shiva’s vehicle). The cremation site (ghat) behind the temple, on the banks of the Bagmati River, is a very important site for all Hindus. Being cremated here is a much desired wish for them, since by doing so, one is assured of a pathway to heaven. Near the cremation ground is the Bachhareshwari Temple which is dedicated to Goddess Parvati. The Pashupatinath complex also has many other temples dedicated to different gods and goddesses. One of the more important among these is the Guhyeshwari Temple, dedicated to Goddess Kali. There are many Nepal tours planned by Hindus around the globe to take a spiritual journey just to visit this famous temple. 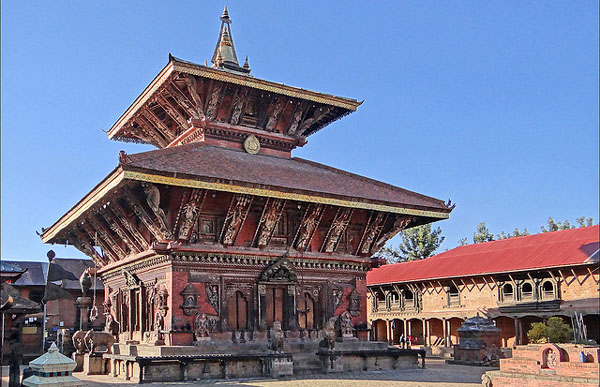 Another famous Hindu shrine is Changu Narayan Temple, the most ancient of all temples in the Kathmandu Valley. It too is a UNESCO world heritage monument, and is particularly famous because, in and around the site, one will find some excellent examples Licchavi period craftsmanship in stone, wood, and metal. Changu Narayan Temple is dedicated to Lord Narayan (an incarnation of Lord Vishnu) and one of the major attractions here is his 10-headed and 10-armed 5th century stone image. Another attraction is the life sized 5th century statue of the mythical man/bird carrier of Lord Vishnu, that is, Garuda. The oldest stone inscription found of the Licchavi period is located besides this statue. The gilded doors are guarded by two mammoth stone lions and there are intricate gilded windows on either side. Here, also, you’ll see many other images of gods and goddesses in smaller temples. Changu Narayan is the kind of place that is ideal for pilgrim tours because it combines history and art in addition to religion.

About eight kilometers northeast of Kathmandu is Budanilkantha, the abode of the “Sleeping Vishnu”. Here you will find a 1000-year-old statue of Lord Vishnu lying with his legs crossed in a 13-meter-long tank. He holds a chakra (disc), a club, a conch-shell, and a lotus flower each in his four hands. The 5-meter-long statue is believed to be from the 7th or 8th century. It is said that the Sleeping Vishnu sleeps during Chaturmasi period and wakes up on the day of Haribondhini Ekadashi (late October or early November). In the days of royalty, the king of Nepal was barred from seeing the deity because it was believed that doing so would lead to his early demise. Another interesting place for pilgrim tours.

There are many important Hindu shrines outside the Kathmandu valley as well. One of the most famous among these is Janaki Temple in Janakpur of Dhanusa District. It is the birthplace of Lord Rama’s consort, Goddess Sita. Janakpur, also called Janakpur Dham, is some 390 km east from Kathmandu, and was once the capital of the Mithila kingdom. Built in A.D. 1911, Janaki Temple has an interesting architecture because one can see a lot of Mogul influence in it, although history does not show Moghul rule or much cultural influence over the entire region at any particular time. Near the main temple is another temple that was built in more recent times known as the ‘Sita-Ram Vivah Mandir’. There are many sacred ponds in Janakpur Dham, among which Dhanush Sagar and Ganga Sagar, located near the Janaki Temple, are considered to be especially sacred. A visit to Janaki Temple is a must for many Hindu pilgrims and figures in many pilgrim tours to the country.

One of the most popular sites in Nepal for pilgrim tours is Manakamana Temple, which is located on a hilltop in Gorkha District, about 125 km from Kathmandu. There are two ways to reach the temple, one is by hiking up a steep hill from a place called Abu Khaireni on the Prithvi Highway, and the other is via a cable car from a starting point in Kurintar on the East-West Highway. The temple is dedicated to Goddess Bhagwati and the temple is specially revered because a visit there is believed to fulfill all your wishes. So, it is natural for Manakamana to be a popular destination during pilgrim tours to Nepal.

Another equally famous shrine is Muktinath in Mustang District which is a sacred site both for Hindus and Buddhists, and famous for its natural methane fires, cold springs, and ancient fossils. There are 108 spigots around the Vishnu Temple that are in the shape of cows’ heads through which is channeled cold water from the mountain springs. In another temple nearby, the Jwala Mai Temple, one will find two tiny blue flames burning incessantly from a hole that also emits water. For Buddhists, who refer to it as Chumig Gyatsa (a hundred-odd springs), it is sacred as the site of Lokeswar (Avalokiteshvara), Tibet’s protective deity.

Indeed, Nepal is ideal for a spiritual journey, no wonder there are so many pilgrim tours planned throughout the year by devotees of both Buddhism and Hinduism from around the globe.