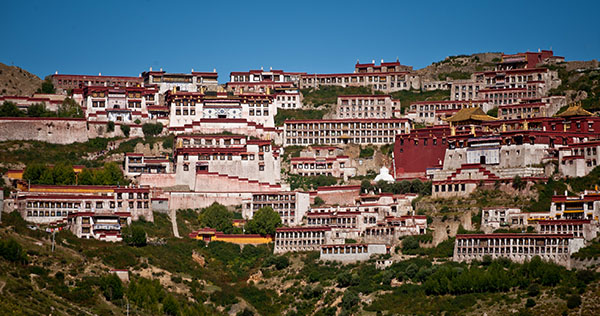 You can no doubt choose from a variety of Tibet tours, but given that there are so many famous ancient monasteries—each with its own uniqueness—all around the vast expanse of the region, many tours turn out to be pilgrimage tours one way or the other. Ganden Monastery is one such ancient monastery, it being the very first monastery of the Gelugpa order, the biggest of all Buddhist orders in Tibet. Ganden is to the northeast of Lhasa, a distance of only 50 kilometers, which is a little more than an hour’s drive by bus, a couple of which leave every morning from Barkhor Square. So, it’s pretty easy to get to; not many hassles, and you don’t need any special permits either. The buses return around midday; so it’s all pretty convenient. The bus will probably stop on the way back at Sanga Monastery at the foot of the Dagtse (or Dechen) dzong, which you’ll find to be in a state of some ruin.

No doubt you are aware that most religious pilgrimage sites anywhere around the world have a fair bit of history involved. Well, so has Ganden. It was established in 1409 by Tsongkhapa, the man responsible for bringing about important reforms to the Gelugpa order. The founding was preceded by the celebration of the first Monlam festival at the site. As you move round the monastery, you are likely to find many images of the revered reformer along with two of his foremost disciples, Kedrub Je and Gyatsab Je, all around the place. Tsongkhapa was the first abbot here, and after his passing away in 1411, the post, which came to be called as the Ganden Tripa, was awarded to the most meritorious. Recent history has left its scars on the monastery due to damages from Chinese artillery shells around the early 1960s. And, in 1996 and 2006, Ganden Monastery was in the news for anti government demonstrations by monks. Certainly, you’ll be getting your money’s worth by embarking on this Buddhist pilgrimage tour when in Tibet. History by the block! 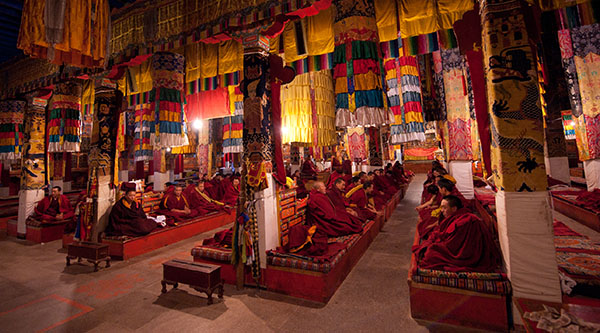 This particular pilgrimage in Tibet involves a visit to all the different interesting sites within the monastery complex. First, you visit Ngam Cho Khang (chapel) with its small statue of Tsongkhapa, and with a small shrine alongside housing four protective deities. Then, you walk into the Debating Courtyard, where you may see a debate in process. Or maybe not. Anyway, Tsongkhapa’s tomb comes next; it is pretty impressive, being fortress-like and red in color. It is known as the Serkhang. You climb some stairs to reach the Yangpachen Khang (the Serkhang chapel) which has the Tsongkhapa’s chorten. Next, you pay your respects at the chapel of Jampa Lhakhang, up ahead of the Tomb of Tsongkhapa. You’ll find two quite large-sized icons here: that of the Future Buddha and the eight bodhisatvas.

The Assembly Hall is next on the agenda; it is, like many other of the relics, been renovated. Two huge statues of Tsongkhapa immediately catch your eyes, along with smaller statues of the sixteen arhats. You climb the stairs inside and reach the Golden Throne Room (Ser Trikhang) which has Tsongkhapa’s throne. Here, your head will probably be thumped with the yellow hats worn by Tsongkhapa and the Dalai Lama; that’s good blessings. East of the Golden Throne Room is the residence of the Ganden Tripa (a.k.a. Zimchung Tridok Khang). Besides the sites mentioned above, there are many other interesting buildings inside the complex, and which you’ll of course be passing by on what is essentially, a most interesting Buddhist pilgrimage tour of a unique Tibetan monastery. 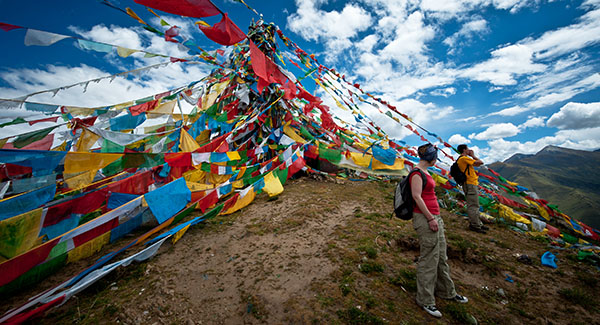 Now, you’ll also want to take a kora (circumambulation) around the monastery. Well, of course you can. It consists of a low kora and a high kora, meaning that partly you walk upwards and partly downwards. Southeast for the car park you’ll see a path which bifurcates after some distance. The left one goes to Hepu village while the right one takes you up a ridge for some 40 minutes. Reaching the peak, you’ll see pilgrims burning juniper incense and offering tsampa. From here you walk downwards on the west side of the ridge towards the monastery. That’s the high kora. The low kora starts from another trail near the car park which goes west behind the ridge and the monastery. It’s a walk of some 45 minutes and fun all the way. You’ll come across eager pilgrims peering at rocks through clenched fists; apparently, they hope to see some divine visions. There’s also a sky burial site up ahead, and at the end, Tsongkhapa’s hermitage.

That’s it, a pretty thorough pilgrimage in Tibet if ever there was one; and what’s more, not at all inconvenient! Oh yes, the Ganden tour is certainly one of the most enjoyable of all pilgrimage tours in Tibet.