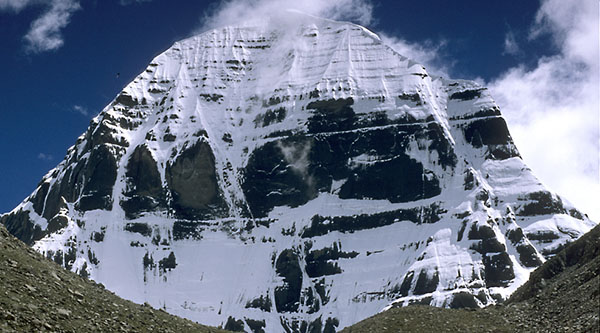 One could rightly say that many trekking routes in the Nepal-Tibet region invariably go through many religious sites, and often end at one, which means that most can be said to be pilgrim tours.  Particularly, because of the country’s ancient history, many Tibet tours are inherently pilgrimage tours. At the same time, there are some which stand out. These are pilgrimage tours to places such as Mt. Kailash, Lake Mansarovar, Gamden Monastery, Tashilunpo, Tirthapuri, etc.

The Kailash tour, involving a 53 km trek over three days, is the most sacred of the pilgrimage tours in Tibet. The four-sided Mt. Kailash is located in western Tibet, and it is the very stuff of great legends. It is identified as the center of the universe, and said to be the mystical Mount Meru (home of the gods) of religious lore. The great rivers of Karnali, Indus, Sutlej, and Brahmaputra originate here. Towering at a height of 6714 m, Mt. Kailash is revered by Hindus as the abode of Lord Shiva and his consort Parvati. Buddhists regard it as the abode of Demchok, the angry manifestation of Sakyamuni, while Jains revere it because they believe that this is where their first saints’ were emancipated. Similarly, according to the ancient Bon religion, Mt. Kailash is Yungdrung Gutseg (Nine-stacked Swastika Mountain) where Bonpo founder Sherab is believed to have come down from heaven. Yes, the Kailash tour is one that beckons thousands of devotees from many religions. No wonder the Tibetans call it Kang Rinpoche, Precious Jewel of Snow, and a circumambulation (kora) around it at least once in a lifetime is a fervent desire of many. 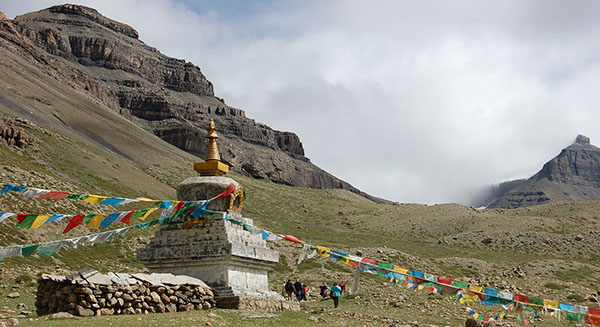 The main season for the Kailash tour is from mid-May to mid-October, and the starting point of the kor is Darchen (4560 m), a small nondescript town. From here, you head across the Barkha plain and four kilometers ahead, the trail goes up a ridge to a prayer flags-decked cairn at 4730 meters, and then enters the Lha-chu valley, continuing along the Lh-chu River on to Dira-puk Monastery. An hour’s walk brings you to the Tarboche area and then to Saershong. Further ahead, you’ll walk through long lines of mani (prayer) walls before reaching a small wooden bridge. By this time, you should have walked for some three hours starting from Darchen, and it should take you another three hours or so to arrive at Dira-puk Monastery. Obviously, all the areas you are walking through are highly revered sites with a number of sacred monasteries and relics. This is the first stage of the Mt. Kailash kora, the most sacred of Tibet’s Buddhist pilgrimage tours.

The second stage involves hiking to Zutul-puk Monastery and will take you about 7-8 hours involving an ascent of some 550 m and a descent of about 600 meters. From Dira-puk Monastery, you’ll be heading east, crossing the Lha-chu River over a bridge, and then it’s a longish ascent up to Drolma-chu Valley, crossing the meadow of Jarek Donkhang (5210 m) on the way. Two hours from Dira-puk, you’ll reach rocky place called Shiva-tsal, where you leave something personal behind to symbolize that you are now leaving your old life behind. Your rebirth happens when you reach Drolma-la Monastery (5630 m), which you reach after walking for some time (about half an hour from Shiva-tsal) on an easy flat trail. Here, you perform a circumambulation and thank Drolma’s mercy in making you reborn. From here, after a bit of rest and relaxation, you go downhill, and espy Gauri Kund (Lake of Compassion) below at 5608 meters. One hour or so later, you’ll have arrived at the banks of the Lham-chu Khir. On the way, you’ll come across Milarepa’s sacred footprint. 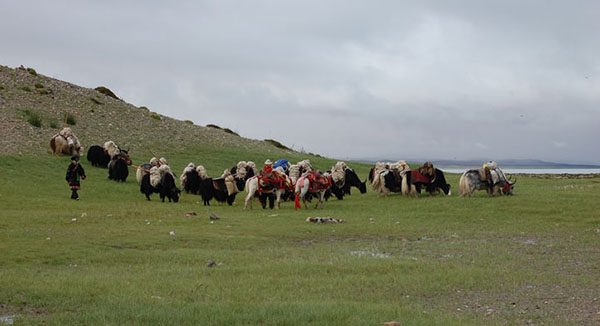 Some distance ahead, you come to a large rock with the third of Buddha’s footprints on top. The first footprint is near the sky burial site of the 84 Mahasiddhas at Tarboche while the second is some 30 minutes after passing the second prostration point between Chuku and Dira-puk monasteries. Some 30 minutes of hiking towards the south brings you to a valley from where you sight Mt. Kailash’s eastern (or crystal) face. You keep on walking for another two hours, and eventually, you’ll land up at an expansive grassy camping site. The Zutul-puk Monastery (4790 m) is some one hour away from here.

Stage three of the Mt. Kailash kora involves a three to four hour walk over some 14 kilometers. You’ll be descending about 150 meters to reach Darchen again. From the monastery, the trail goes along the river for about 60 minutes before ascending to reach a narrow canyon with purple, cobalt, and rust colored walls (the Gold and Red Cliffs). The trail then opens onto the Barkha plain (4610 m). This is where you’ll find the fourth prostration point: the first being at the cairn above Darchen; the second between Chuku Monastery and Dira-Puk Monastery; and the third at the mouth of the valley that you come across some distance from Gauri Kund near Buddha’s third footprint. 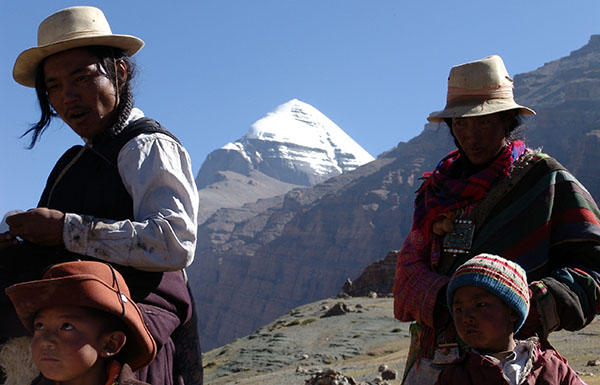 After entering the Barkha plain, you have a fairly comfortable walk for about one hour before arriving back at Darchen. And, so, now you have completed one of the most important koras of your lifetime. Congratulations. You would have not only cleansed a lot of accumulated sins but you would also have had the fantastic opportunity of witnessing firsthand many sacred sites and legendry relics on the way. Well, that’s what the Kailash tour is all about and that is why this is the most famous of all Buddhist pilgrimage tours in Tibet.