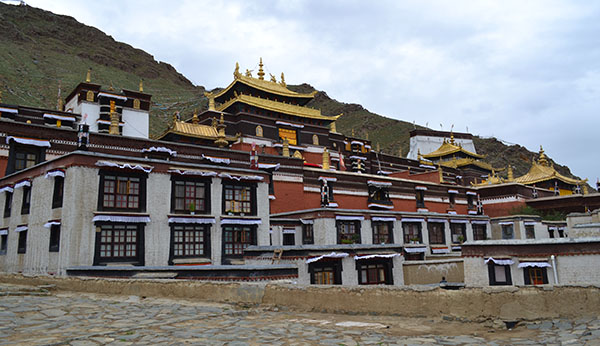 Tibet tours are full of history and give you the chance to visit quite a few religious pilgrimage sites that continue to mystify with their myths and legends. The Tashilunpo Monastery in Shigatse, a town only second after Lhasa in size, and some 250 km away from it, is one such sacred monument that has played an important part in Tibet’s ancient history. After the rise of the Gelugpa order, this monastery became the seat of the Panchen Lamas. Shigatse’s other highlight is the Shigatse Dzong which resembles the Potala Palace and is similarly located on a high hilltop. This too has significance as the Tsang kings once ruled from here.

Tashilunpo Monastery was built by Gendun Drup, a disciple of the great reformer Tsongkhapa, in 1447. Drup is regarded (recognized) as the first Dalai Lama. The monastery is one of the six renowned institutions of the Gelugpa order, the other five being: Drepung, Sera, Ganden (all in Lhasa), Kumbum (in Ta’er Si), and Labrang (in Amdo). Tashilunpo’s special importance is due to the fact that it is the seat of the Panchen (Great Scholar) Lamas, a lineage that was established, second only to that of the Dalai Lamas, by the fifth Dalai Lama who had extremely high regard for his teacher, the abbot of Tashilunpo, whom he declared to be Amitabha’s (Opagme’s) manifestation. In fact, this led to a rivalry of sorts that continues till date in the temporal and spiritual spheres of Tibetan Buddhism. The Panchen Lamas have great influence and play an important part in the selection of Dalai Lamas just as the latter has on selection of the former. This—added to the fact that both are supposed to be reincarnations of previous Lamas—has led to some pretty intriguing twists and turns in the politics of Tibet after its annexation by China. 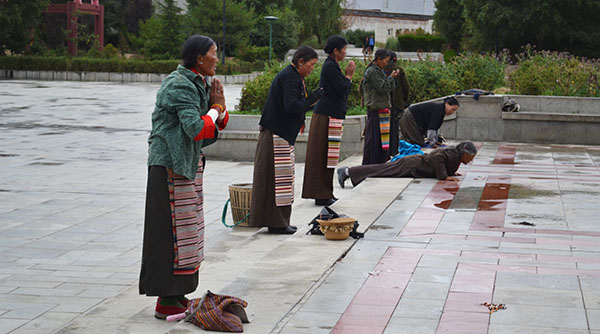 See how much of interesting history you get to unearth while on a pilgrimage in Tibet? And especially in a place such as Tashilunpo Monastery. Anyway, aside from the political part, let’s see what else there’s to see. Like all the great monasteries, this monastery too is a labyrinth of numerous rooms, courtyards, staircases, tombs, and even some secret passages. Chapels to see are: Namgyel Lhakhang, which has a huge statue of Tsongkhapa with Jampa and Jampelyang on both sides of him; and Jamkhang Chenmo (Chapel of Jampa). The latter is impressive, housing as it does the largest gilded statue in the world—the 26-meter high icon of Jampa (Maitreya), also known as the Future Buddha. This gigantic statue is undoubtedly one of the greatest sights you’ll see while on pilgrimage in Tibet; here’s some background on it. It was built by the ninth Panchen Lama in 1914, and almost 1000 artisans and craftsmen were involved in its making. Now, here are some stats to gain a better perspective: each of the fingers is longer than one meter and more than 300 kg of gold was used to give the statue its gold coating. In addition, plenty of precious stones have been used as well. All of which means that it’s surely a sight for sore eyes! As an aside, it might interest you to also know that the ninth Panchen Lama (1883-1937) spent his last days as a prisoner of a Chinese nationalist warlord.

Then there is the glittering gold-plated chorten of the 10thPanchen Lama (Sisum Namgyel) inside a chapel, the ceiling of which is painted with a mandala and which also has a lot of paintings of gold Buddhas on the walls. Nearby is the silver and gold chorten of the fourth Panchen Lama. After this, there’s a walkway leading into the Kelsang Temple, which is actually a collection of many buildings along with a large courtyard that has a tall prayer pole arising from its center. The assembly hall, with the massive throne of the Panchen Lama at the center, is further ahead. It is perhaps among the most ancient of the buildings in the monastery, dating back to the 15th century. You’ll see long rows of cushions for monks to sit on, and numerous thangkas hanging down from the ceiling. 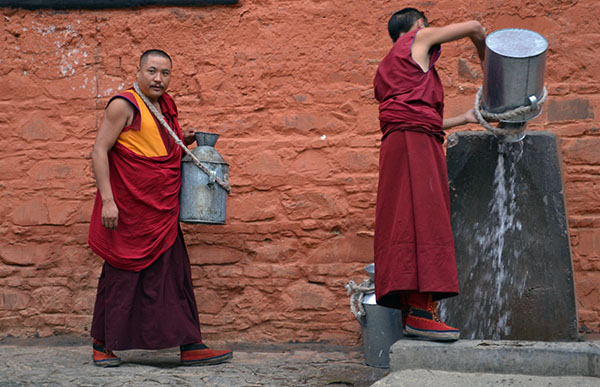 A more recent addition is the large Tomb of the fifth to ninth Panchen Lamas (Tashi Langyar) built by the 10th Panchen Lama. This was done because many of the relics suffered destruction during the period of China’s Cultural Revolution. Aside from all these, there are still many more chapels and other sites inside the sprawling Tashilunpo Monastery, and it will surely be worthwhile for you to spend some time wandering around. There are also two colleges, the Tantric and Philosophy Colleges. Now, as usual, there’s the kora to be completed. Well, it’ll take you about an hour to do so. You walk along the monastery walls clockwise, up a curving alley around the western wall, and onto the hills above. You keep on walking, the sights are great, and soon enough you come across a white tower that’s 13-storey high. This is from where a giant thangka is hung down during festival times. Now the path bifurcates; you walk down to reach the monastery, while the other path takes you to Shigatse Dzong some 20 minutes away. But maybe you want to do that some other time. For now, after having completed the kora, you should be happy at finishing what you’ll agree has been a historical pilgrimage in Tibet.