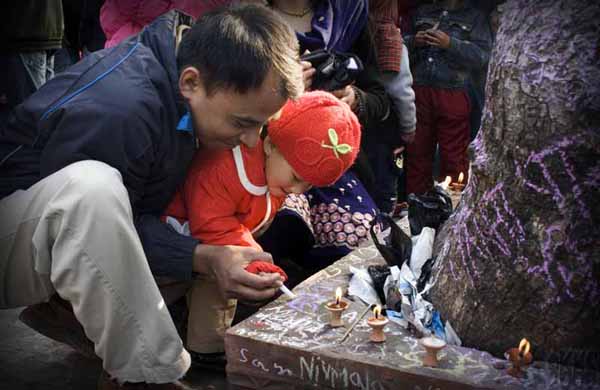 A father teaching his child to write during the Saraswati Puja. Photo: Lucida

Saraswati Puja often approaches in late January or early February, where one will find schools and colleges all over the country gaily decorated with festoons and stages on which will be a large, wonderfully made statue of Goddess Saraswati, the goddess of knowledge and learning. Children and young adults will be flocking to each and every institution of learning in their towns and villages to pay their respects and get the blessings of the goddess of knowledge. Perhaps it wouldn’t be an exaggeration to say that every Nepali has had this joyful experience in their lives during their student days. Indeed, it can well be said to be the day for students.

Schools and colleges vie with each other to have the best-made statues and the most gaily decorated stages. The weeks preceding this enjoyable Nepali festival are busy times for the skilled statue makers who have their hands full with orders. The sad thing is that all their efforts resulting in wonderful works of art will eventually, after the day of Saraswati Puja, be immersed in nearby rivers and streams, some of which will be smashed to smithereens while being so immersed. It is a cause of some reflection, and a person of philosophical bent could come to the conclusion that it is maybe significant of the way of the world in which all things, no matter how beautiful, are doomed to destruction sooner or later. It could also signify that beauty is a transient thing.

Anyway, aside from such philosophical meanderings, on Saraswati Puja, let’s talk about Goddess Saraswati. She is said to be the mother of all Vedas and the chant of Saraswati Vandana almost always precedes and ends any Vedic lesson. Conceived from the union of Lord Shiva and Goddess Durga, Saraswati is the bestower of speech, knowledge, and learning, as well as of art and culture. About her persona, she has four hands; one holds a sacred scripture and another holds a lotus, while the other pair hold a stringed musical instrument called the veena. She is dressed in white and sits on a white swan, the white color signifying purity. Saraswati is also venerated in Buddhism as the consort of the revered sage Manjushri.

Saraswati’s birthday, celebrated as Saraswati Puja, is also known as Vasant (Spring) Panchami or Shree Panchami, and is held every year on the 5th day of the bright fortnight of the month of Magha. This festival marks the beginning of spring and ushers in the celebration of the festival of colors, Holi, soon after. While Holi is undoubtedly a bigger festival, Saraswati Puja too is celebrated with gusto, especially by students, and on the day, there is an air of gay revelry everywhere. A spirit of youthful energy prevails, this amplified by the loud music blaring out from big loudspeakers at the different sites. As said before, educational institutions have a healthy rivalry among themselves about which has the most beautiful statue and which organizes the festivities in the best manner. In fact, in smaller towns and in villages, students often make a beeline first to those with a well-earned reputation for the same, after, of course, first visiting their own schools or colleges.

After a day full of celebration and joy, the next day, it is time for the statues of Goddess Saraswati to be immersed in rivers and streams nearby. They are taken out in a procession of vehicles with the full fanfare deserving of her stature, preceded by drum rolling and cymbal crashing brass bands, and with the vehicles crammed with vermilion powdered students. This day too is a day of high gaiety. However, the scene is not so gay at the final site of immersion, where the lovely statues of Goddess Saraswati are lost forever.