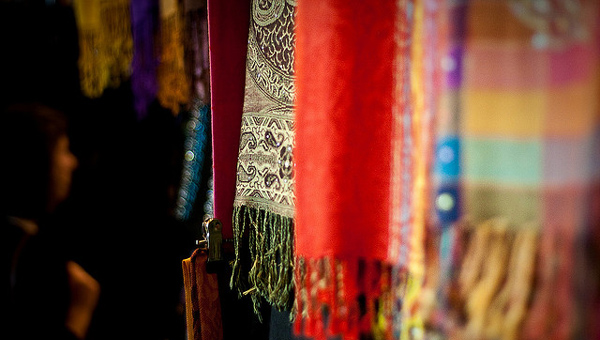 1997 to 2000 were boom years for the pashmina industry in Nepal. Markets in the West were so enamored by the elegance of Nepali pashmina that they just couldn’t have enough. According to a leading manufacturer then, orders were doubling and quadrupling every other month. Over 50,000 people were employed by the pashmina industry in its heydays, and pashmina alone constituted 82 % of all handicraft exports from Nepal in 2000-2001. An industry that exported Rs. 3 million worth of pashmina in 1997 was exporting Rs. 5.6 billion’s worth by 2000, and the number of production centers had soared from just 25 in 1993 to 959 within a short period of only six years. However, by 2002, exports had plummeted to just Rs. 661.37 million, and by 2009/2010, it was only Rs. 437.60 million. The story of pashmina describes, in a nutshell, the state of the handicraft industry as a whole.

What were the reasons for such a fall from grace? Well, the analysis and the discussions can go on till the cows come home, but there is no denying the fact that the handicraft sector of Nepal holds big potential. This promising sector is categorized broadly as: textile and non-textile sector. The former includes, along with pashmina, wool, dhaka (one kind of local textile), hemp, allo (nettle fiber), felt, silk, and cotton goods. The latter, that is, non-textile sector, consists of woodcraft, stone craft, metal craft, silver jewelry, leather goods, paubha (religion-based paintings), bone and horn products, handmade paper products, incense, ceramics, bead items, bamboo products, and plastic items. The major contributors to total handicraft exports are pashmina, woolen goods, silver jewelry, metal craft, and felt products.

The fine fur on the neck and shoulders of mountain goats (chyangras) is the source of Nepali pashmina. As can be deduced, this makes it somewhat of a rarity, since such goats are to be found only at high altitudes. One of the major reasons for pashmina’s drastic downfall in the recent past was due to all sorts of unethical individuals entering the lucrative sector and passing off fake pashmina as the real stuff, when, in fact, they were being made using materials other than pashmina. In early 2009, the industry managed to acquire a collective trademark under the brand name of “Chyangra Pashmina” to protect the image of real Nepali pashmina and hopefully, regain its lost market.

As for woolen products, jackets, pullovers, ponchos, mufflers, hats, gloves, and socks are seemingly the most in demand. These are hand-knitted using wool imported from New Zealand and Australia. Yak wool, of a finer variety than the usual, is also used, especially to make jackets. Come winter, and you’ll see plenty of them hanging in shops around Kathmandu, particularly in the tourist areas. Its unique texture and its robustness are what make fine yak wool so popular. However, pure white color is not found in yak wool and it does not dye so easily either. That is why both yak and sheep wool are used during the knitting process.

When talking about silver jewelry, one has to look towards Patan (Lalitpur), which has numerous skilled silversmiths, some of whom are highly renowned for the finesse of their works. You’ll find lots of shops selling silver jewelry and many of the shops are owned by Shakyas and Bajracharyas, two clans that have carried on the tradition of crafting exquisite jewelry down the ages. Bu Bahal, a locality within the city, is especially famous for its many establishments making silver crafts including jewelry; jewelry that has quite a good demand abroad, particularly in some European countries, where silver jewelry inlaid with coral or turquoise stones are especially popular. Silver jewelry with snake designs are also much sought after. 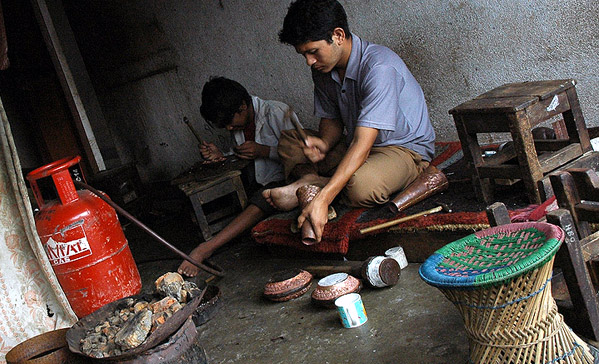 For metal craft too, one has to again look towards Patan, where one will find quite a few establishments located in its many alleys involved in the tedious process of creating works of art from metal. Magnificent metal statues and other metal items have been made here down the centuries. Many of these enterprises mostly make statues of deity figures, with some, like the one at Oku Bahal, making statues exclusively of Buddhist deities meant for installation in monasteries. Metal statues are made using the lost wax method, a process which goes like this: first, a wax model is created; it is enclosed in a clay mold; next, it is fired in high heat; then the wax is poured out through a small opening and replaced by whatever metal is being used (bronze, copper, etc.); this is allowed to set; after that, the hardened mold is broken to reveal the metal figure; and finally,  refining tools and paint are used to give the finishing touches.

As far as felt products are concerned, they are a relatively new addition to the list of Nepali handicrafts. Till 2006/2007, felt had been listed under the category of woolen goods. Felt products are now a significant part of leading handicraft exporters such as the Association of Handicraft Producers (ACP) which is located at Rabi Bhawan in Kathmandu. Felt is a fabric made of wool fibers or animal hair matted together using steam and pressure. Fibers include wool, fur, and certain other hair fibers that mat together under the right conditions. Felt is used to make products such as mats and coasters, caps and hats, scarves, foot warmers, socks, shoes, key rings, felt balls, puppets, miscellaneous decoratives, and even jewelry.

These, then, are Nepal’s five leading handicrafts; handicrafts that have not only found eager markets abroad, but are also in increasing demand within the country itself. They provide employment to thousands and help in alleviating poverty, so why don’t you buy a handicraft or two as souvenirs when in Nepal? Your thoughtful gesture is much appreciated.