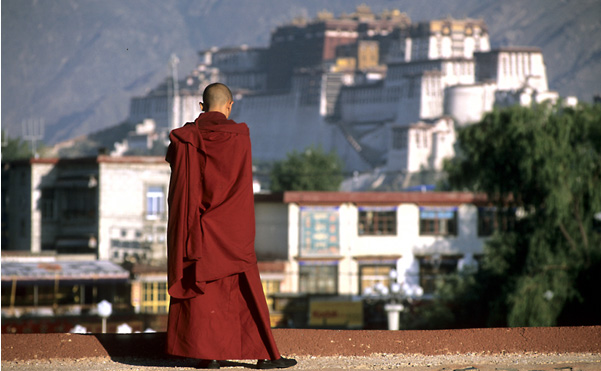 Planning to travel to Tibet? You might like to know when the best time to visit Tibet is. Well, April to October is the period when Tibet tourism is on a roll, with August and September being the two months when a lot of Tibet tours are planned. Now, before you go, wouldn’t you like to know about some places that you must visit? Well then, here are the top 10 most popular tourist attractions of Tibet. 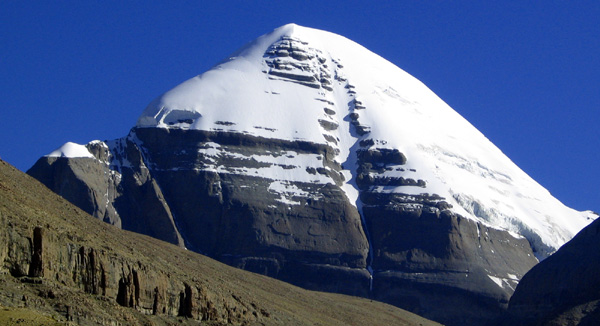 10. Mt. Kailash: Located in far western Tibet, it’s a towering mass of black rock that’s over 22,000 feet. For Hindus, this mountain is revered because Lord Shiva and his consort Parvati are believed to reside here. For Jains, who call it Astapada (the eight-stepped mountain), it is sacred because Rishaba, the foremost of the 24 Tirthankaras (enlightened humans), is believed to have attained salvation here. For those who follow the Bon religion, and who refer to it as Tise, Sipaimen, the sky goddess, is believed to inhabit the mountain. For Tibetan Buddhists, who call it Kang Rinpoche (Precious One of Glacial Snow), it is sacred because Demchok (Sakyamuni Buddha’s angry manifestation) and his consort Dorje Phagmo are believed to have made it their dwelling place. A circumambulation (kora or parikrama) of the mountain is the norm for pilgrims of all faiths, with 108 koras assuring enlightenment. The 53 km long kora usually take three days to be completed. And, no pilgrimage to Mount Kailash is complete without a ritual dip in the icy waters of Lake Mansarovar located at its base, just as no travel to Tibet is complete without a visit to Mount Kailash. 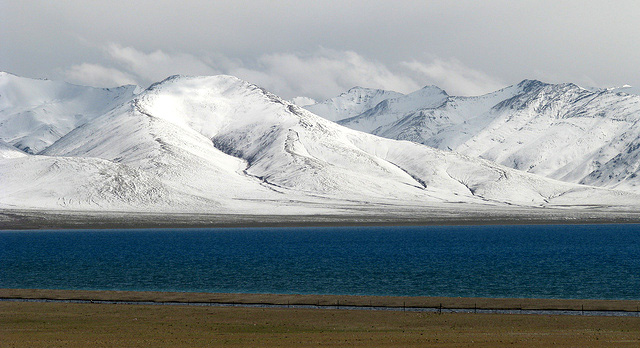 9. Nam Tso or Lake Nam: It is the largest salt lake in Tibet. Not only that, it is also the highest salt lake in the whole world. That’s why it is so famous. How large is it? Well, its surface area is 1,870 square kilometers. And how high is it situated? Well, it lies at an elevation of 4,718 meters above sea level. Where is it located, actually? It’s on the border between Damxung and Baingoin counties, and some 112 km from Lhasa. The snow-capped Nyenchen Tengha towers over this beautiful turquoise lake and there’s a monastery by the name of Tashi Dor at its south east corner. NamTso is a scared lake too, and every Sheep year, thousands of devout Buddhists flock to the site. Of course, you don’t need to wait for a Sheep Year to visit this magnificent bounty of nature, just as you shouldn’t delay your travel to Tibet, as there are a lot of changes going on there every other day and you may not get to see the Tibet you imagined for long.

8. Yamdrok Tso or Lake Yamdrok: It is another very large lake. How big? Well, it’s over 72 km in length and 621 km2 inarea. It’s a sacred lake too, besides being uniquely fan shaped. This interesting lake has nine islands. The Samding Monastery is located on one of these islands, and Pede Dzong, an ancient fort, is located on another. It’s all a very picturesque sight, what with all those snow capped mountains surrounding it, and the fan shape, the monastery, and the dzong. Lhasa is some 100 km northeast from the lake, while Gyantse, another big town, is about 90 km west of it. Easy enough for a day visit, so make it a point to go there when you travel to Tibet. 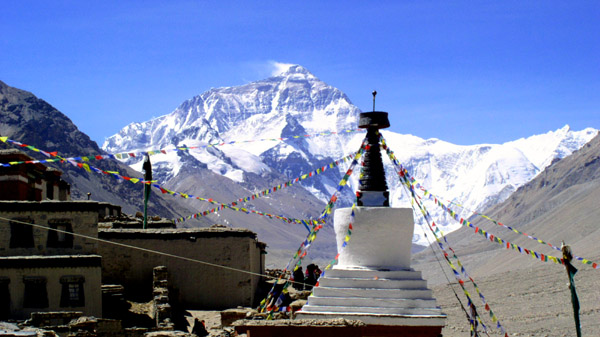 7.  Mount Qomolangma Base Camp (5200 m): The base camp of the highest mountain on earth. Yes, that’s right, it’s Mount Everest we’re talking about. The 8848 m high peak, located on the border between China and Nepal, is another must-to-be-visited place when you travel to Tibet. It has been 60 years since its first ascent in May 29, 1953, by Tenzing Norgay Sherpa and Edmund Hillary, and thousands more have done so since, yet Mount Everest still retains its aura and remains a challenge to coming generations. The Rongbuk Monastery (4980 m), situated at the base of the mighty peak, adds a touch of spirituality to the awe inspiring landscape. It is also the highest shrine in the world. Between Rongbuk and Base Camp, you’ll find a lot of tents beside the dirt road which offer cheap but sparse accommodations. Doubtless, a visit to the Mt. Qomolangma Base Camp is a must in your itinerary when you travel to Tibet. 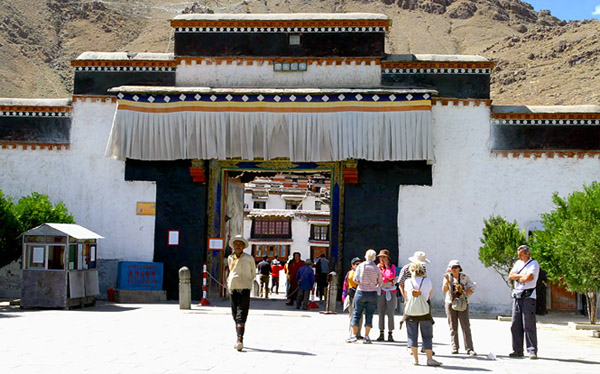 6. Tashilunpo Monastery: Located in Shigatse, this is a large monastery that covers an area of some 70,000 m2 within its walls, making it more of a walled city with a collection of red and white building built on a hill. Founded in 1447, it is the seat of the Panchen Lamas, and one of the six great institutions of the Gelugpa sect, the others being Sera, Drepung, Ganden, Kumbu, and Labrang. Inside the monastery premises are a group of ochre buildings topped with gold in which are the remains of past Panchen Lamas. To their right, on higher ground, is the ‘great white wall’, which is where huge thangkas are exhibited during festivals. The Chapel of Jampa has the largest gilded statue in the world, the 26 m figure of Maitreya (Jampa). Each of the statue’s fingers are more than 1 m long, and over 300 kg of gold is said to have been used to gild the gigantic statue! Oh yes, you got to see it to believe it, and so, make sure you go there during your travel to Tibet. 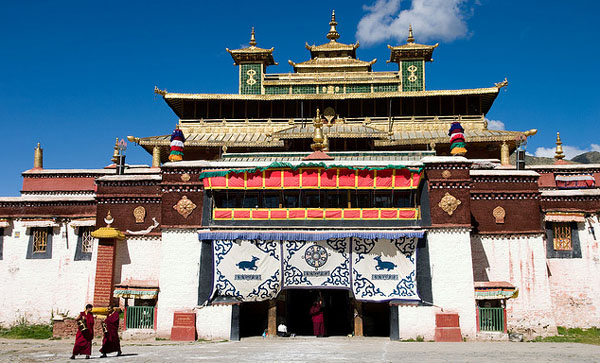 5. Samye Monastery: This is Tibet’s first monastery—it’s said to be 1200 years old—and signifies the introduction of Buddhism into the country, replacing the Bon religion prevalent then. How did this happen? Well, apparently, Guru Rinpoche had it out with a large number of demon massed at Hepo Ri, a ridge east of Samye, and managed to get them to bite the dust. This resulted in the establishment of Buddhism in Tibet. Samye is interesting architecturally; the central building’s ground and first floor were originally styled in the Tibetan way, the second floor was Chinese, while the third was Indian. You’ll find a lot of history within the monastery premises, that’s for sure, and that’s why you should go there when you travel to Tibet. 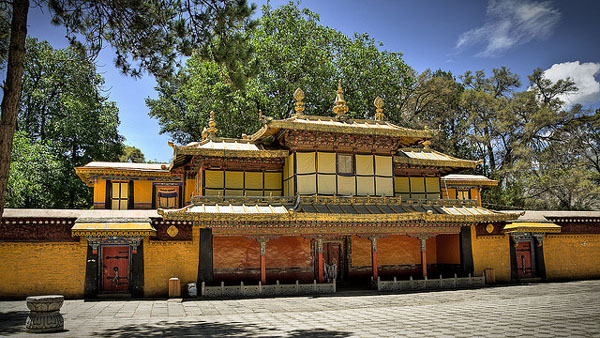 4. Norbulingka: Situated in the western part of Lhasa, this used to be the summer palace of the Dalai Lamas. It has a really big garden, and that’s what its name means, ‘jewel park’. It’s sprawled out over an area of some 360,000 square meters. The first summer palace was built in 1755 by the seventh Dalai Lama; the 13th Dalai Lama built three more palaces in the northwest corner of the grounds; while the 14th Dalai Lama built the New Summer Palace in the middle of the sprawling park. The Norbulingka is where the Shotun festival (Yoghurt festival) is held every year on the 13th day of the 6th lunar month (end July or early August), and that’s when you’ll get the chance to see some pretty colorful opera performances. It’s an ancient festival that began in the 17th century when monks coming out of a tough retreat were treated to yogurt by the people. Later, opera performances were also held to entertain them. So, if you happen to travel to Tibet during this festival, you are in for a great time. 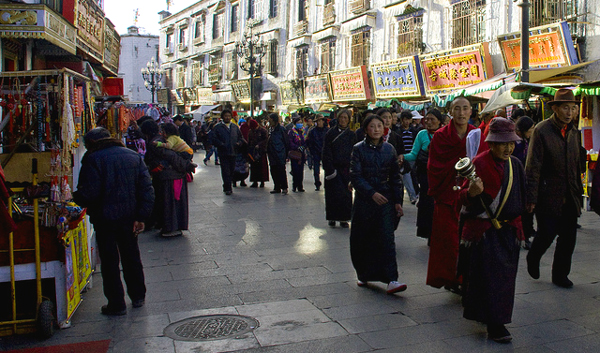 3. The Barkhor Circuit: It is a quadrangle of streets that goes around the Jokhang temple and constitutes Lhasa’s main shopping district for Tibetans. Walking around this circuit gives you a quick and comprehensive idea of Tibetan lifestyle and culture, as you’ll find people from many regions shopping around, or on a pilgrimage to Jokhang, at the Barkhor Circuit. There are numerous shops peddling their wares, and it’s as a good to place to get your hands on a few souvenirs as any. No doubt, the Barkhor Circuit is going to be one of your memorable outings when you travel to Tibet. 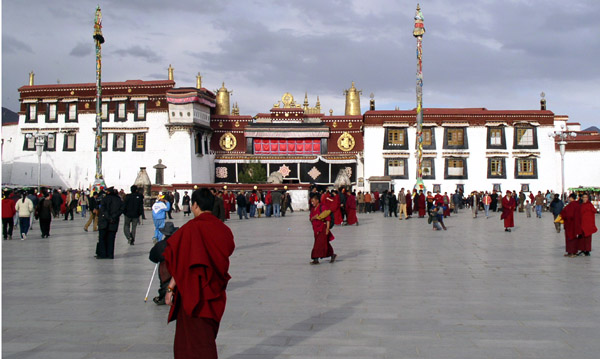 2. Jokhang Temple: Also known as Tsuglhakhang, it is the most sacred shrine in all Tibet and located in the center of Lhasa old town. It’s always alive with the rhythmic chanting of prayers, bustling monks and pilgrims walking around with prayer wheels, and the sight and smell of thousands of butter lamps twinkling away to glory. Founded in the 7th century, it has an interesting history. When King Songstsen Gampo married Princess Bhrikuti of Nepal, she brought along an icon of Mikyoba (Akshobhya) as part of her dowry. Jokhang was built to house this icon. After Songsten Gampo’s demise, another icon, that of Jowo Sakyamuni, was moved secretly from the Ramoche temple to Jorkhang as a safeguarding measure. This icon had been brought into Tibet by the king’s Chinese wife, Princess Wencheng. It is the most revered Buddha image in the whole of Tibet and that’s why Jokhang means “chapel of the Jowo”. Your travel to Tibet could well have you first visiting this famous temple.

1. Potala Palace: And, now we come to the main highlight of your travel to Tibet—a visit to one of the icons of the world—the magnificent Potala Palace. This huge fortress like structure is situated on Marpo Hill, 130 meters above the Lhasa valley, from where it rises for another 170 meters. It was during the reign of the fifth Dalai Lama that the Karpo Potrang, or the White Palace, started being built in 1645, and was completed three years later in 1648.  Between 1690 and 1694, another palace, the Marpo Potrang, or the Red Palace, was completed. The Potala Palace was the residence of the Dalai Lamas and served as the seat of the government. During the reign of the 13th Dalai Lama, in 1922, many renovations were done on the chapels and the assembly halls of Karpo Potrang. Similarly, two more stories were added to the Marpo Potrang. The Potala Palace’s interior is over 130,000 m2 in area. There’s plenty of interesting things to see inside and around the palace, and it will undoubtedly be the among the first places you’ll be visiting during your travel to Tibet.