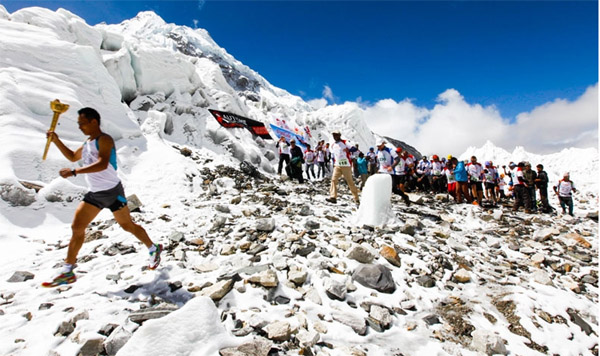 It’s not something new, the first one was held way back in 1985 by Jan Turner and Tony Hunt. Turner completed the first marathon in about 12 hours. Back in England, he got in touch with Bufo Ventures Ltd. who have been responsible for organizing the event ever since. The second marathon was held in November 1987, and every two years after that, the marathon has succeeded in attracting many adventurers seeking a new kind of challenge. At the same time, since only a certain number of non-Nepali runners are allowed to participate (70 this year), you don’t stand much chance of being selected if you don’t have some long-distance running experience. The whole package (24/26 days), as organized by Bufo Ventures, also comprises a 15-day trek across the high Himalayan region prior to running the marathon (allowing for acclimatization), and ascents of Gokyo Ri (5483 m) and Kala Patthar (5623 m). So, it’s something, this package.

The Everest Marathon begins at Gorak Shep (5,184 m), just below the Everest base camp, and ends at Namche Bazaar (3,446 m), the unofficial capital of the Sherpas, making it the highest marathon in the world. You get to run along 42 km (26.2 miles) of Himalayan trails. It’s something that’s going to test all your stamina, endurance, and resolve, although the race is not always uphill, but rather, more downhill than up, with the last 6 miles to Thamo and back being the most demanding. In case you aren’t up to the full slam-bang, you can always try out your legs on the half marathon. 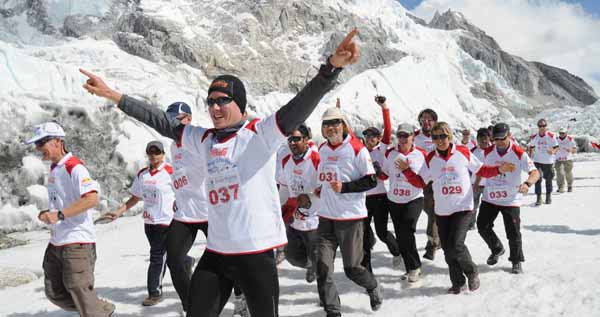 In 2003, another Everest marathon was organized, the Tenzing Hillary Everest Marathon, and it is held every year on May 29 as part of the celebrations to commemorate the first conquest of Everest on May 29, 1953, by Tenzing Norgay Sherpa and Edmund Hillary. This marathon starts at the current Everest Base Camp and ends in Namche Bazaar.
Naturally, it’s the high altitude Nepal runners who have till now come out on top most times. Well, it is a matter of pride, wouldn’t you say? After all, their very reputation is at stake here, they having created somewhat of a legendary status for their toughness, high altitude capabilities, and never ending fortitude. Phurba Tamang ran the fastest Everest Marathon in 2012, clocking in at 3 hours 41 minutes and 31 seconds. What’s more, the five fastest times have all been achieved by Nepali runners. In 2011, Ram Kumar Raj Bhandari finished it in 3 hours 47 minutes and 38 seconds. Well, the guys are pretty tough, right? However, the Nepali ladies are not far behind either, even though it is Anna Frost from New Zealand who holds the fastest time (4 hours 35 minutes and 4 seconds), a feat she achieved in 2009. This stands out prominently since all the other women marathon winners till now have not been able to it under 5 hours. Chechee Sherpa (5:06:15), Mingma Chamji Sherpa (5:07:28), Ang Puti Sherpa (5:14:02), Lhakpa Diki Sherpa (5:17:53), Ngima Yangjee Sherpa (5:17:53), Ang Phuti Sherpa (5:22:50), and Mingma Lama (5:23:10) are the Nepali women with the fastest times till date. 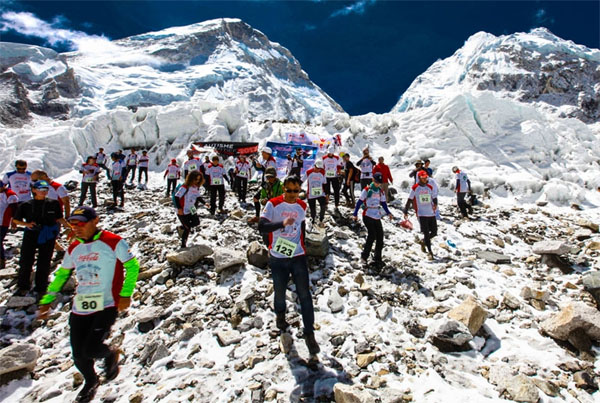 Running at high altitude is tough enough as it is; add to that the rough terrain and the icy winds, and what you get is one of the most challenging activities in the whole wide world. It’s a pretty long race, that’s for sure. However, at the end of it, one thing is assured, you’ll come out of the grueling adventure a stronger man/woman.

Note: The Everest Marathon is registered as a charity, and ‘profits’ from the event go to the Everest Marathon Fund, the purpose of which is to fund educational and health projects around Nepal. Some programs so funded are Britain Nepal Medical Trust, Nepal School Projects, Namche Bazaar Dental Clinic, Nepal Leprosy Trust, International Nepal Fellowship, Community Action Nepal, and Help Nepal.