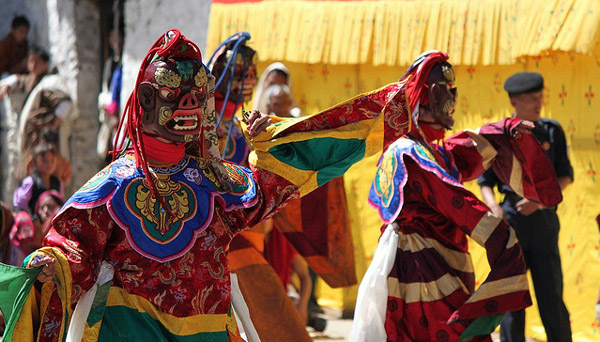 Bhutan may be a small kingdom but it surely has a lot of festivals. These are mostly religious in nature and are called tshechus. Tshechu means the “tenth day” of a month of the lunar calendar, a day when Guru Rimpoche’s birthday is celebrated. Tshechus are held in temples, monasteries, and dzongs through the country, and at different times of the year. Here are some more of Bhutan’s colorful festivals:

Trongsa Tshechu: Before being crowned king, it is customary for the crown prince of Bhutan to first serve as the governor (Penlop) of Trongsa in central Bhutan. This is because Trongsa was from where the first two kings of Bhutan ruled the country. Expectedly, this town has one of the most impressive forts (dzong) in the country. Built in 1648, it is indeed a massive structure, and it is located strategically on the connecting route between the eastern and western parts of the country. Trongsa, therefore, is a very important city, and it has many festivals. However, the Trongsa Tshechu (Jan 9-11, 2014) is the one that’s looked forward to most eagerly.

Ura Yakchoe:  If you are in Bhutan in May, you might be fortunate enough to witness one of the most famous dances of central Bhutan. Known as the Ura Yakchoe, this dance is performed during a 5-day festival (May 10 – 14, 2014) in the Ura valley in Bumthang. This is also the occasion when a revered relic is also exhibited to the general public.

Dochula Druk Wangyel Festival: This festival was established only recently, in 2011, to commemorate the 2003 victory over Indian insurgents residing in southern Bhutan by the army under His Majesty the Fourth Druk Gyalpo. This festival takes place on December 13 every year at the Druk Wangyal Lhakhang Festival Ground at Dochula Pass, which is some 22 km from Thimphu, and is renowned for its panoramic view of the Himalayas. 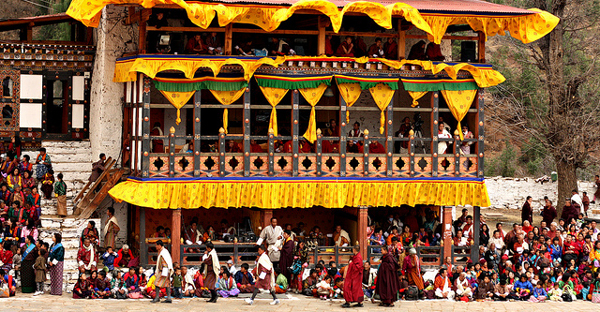 Trashigang Tshechu: This is one of the many festivals held in the largest district of Bhutan, that is, Trashigang Dzongkhag, whose aboriginal inhabitants are the Tshanglas. Here, you’ll find a 17th century dzong, the Trashigang Dzong, which is built on a high ridge that commands a wide ranging view around the region. It was instrumental in driving away invading Tibetans in ancient times. This historical dzong is the venue for the Trashigang Tshechu that will be held from Nov 10 -13 this year. A lot of preparations are called for prior to the holding of this important festival.

Merak Tshechu: This festival is held in the Merak valley (3000 m) of Trashigang Dzongkhag in eastern Bhutan, a region inhabited by the semi-nomadic Brokpas. It’s a pretty remote area of the country where yak rearing and animal husbandry are the mainstays of the inhabitants, and bartering is a way of life, as is merry making and polyandry. The Merak Tshechu, an annual three-day event held at the Merak Lhakhang, gives you an opportunity to see the Brokpas’ unique traditional dances, the Ache Lhamo and the yak dance.

Haa Summer Festival: This festival is held in the first half of July every year in the Haa valley which is close to the international airport in Paro, a two-hour drive that takes you across Bhutan’s highest mountain pass, Chele La. It’s a festival full of fun and frolic and reflects well the nomadic and carefree nature of the valley’s inhabitants. If you are here during the festival, be prepared to down a fair amount of ara, the fiery local liquor. Prepare yourself also for the sight of a rare white poppy flower (Meconopsis superb) that’s only found here and nowhere else in the world.

Well, the list goes on and on. Like said before, this small country sure has a large number of festivals. Planning a trip to coincide with a couple of festivals is the best way to get a deeper understanding of the Dragon Kingdom, a kingdom where GNP (gross national happiness) is more important that GDP (gross domestic production). No wonder there’s so much celebration going on all the time!