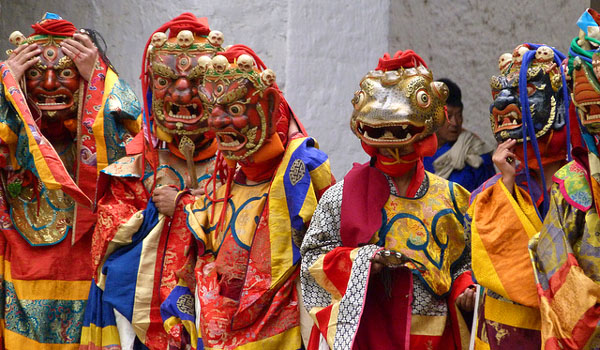 You might think that it is Nepal which has the most number of festivals, the way it is lauded as the “Land of Festivals”. Well, in one way that is correct since Nepal has wide diversity in ethnicity, culture, and traditions, having more than one hundred different ethnicities and a very interesting topography consisting of the hot and sweltering plains (terai), the blessed-with-mild-weather hills, and the harsh arctic climate of the Himalayan region. This naturally means a varied mix of lifestyles, which gives rise to many different festivals. But, Nepal’s neighbor Bhutan is no less when it comes to celebration and gaiety; it too has quite a number of festivals. Most of its festivals are religious in nature and are known as tshechus. A tshechu means the “tenth day” and it is generally held in the courtyards of temple, monasteries, and dzongs in all parts of the small nation. They are held on the 10th day of the lunar calendar month to celebrate Guru Rimpoche’s birthday. The exact day of the tshechu is different in different parts of the country, and varies from temple to temple.  However, there is one thing common among all tshechus, and these are the colorful masked dances which are an integral part of all festivals in Bhutan. Many of these dances reenact heroic deeds of Guru Rinpoche. Here are brief descriptions of some of the festivals of the Dragon Kingdom: 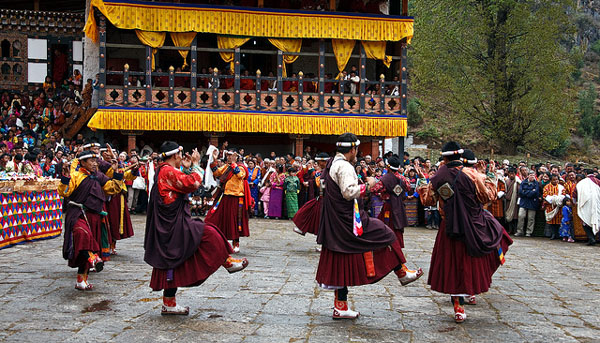 Paro Tshechu: It is held every spring (April 11-15 in 2014) in Paro Dzongkhang (district). Paro is the town where the international airport is situated. The highlight of this festival is the display of the Guru Throngdel, an extremely large thangkha (religious painting).

Thimphu Tshechu: This is by far the biggest festival in the country, aptly so, since it is held in the capital. Celebrated for three days (October 3-5 in 2014), it goes back to 1867, and initially, only monks used to perform just a few dances with mystifying names like Tungam chham (Dance of the Terrifying Deities) and Durdag (Dance of the Lords of the Cremation Ground), as well a Zhana chham and Zhana Nga chham (Dances of the 21 Black Hats).

Pema Gatshel Tshechu: This is a festival held in eastern Bhutan, in Pema Gatshel Dzongkhag, the land of the Tshanglas, a district known for having quite a few festivals. Also famous are its folk songs. This tshechu (Nov 9-12 in 2013) was first held in the early 1980s with the establishment of the dzong here and is also a three day event.

Mongar Tshechu: This is also a festival of the eastern part of Bhutan, in Mongar. This region is known as the ‘bastion of the Zhongarps’ because of the significant contributions made by the Dzongpons of Zhongar to the country’s history. The three-day tshechu (Nov 28-Dec 1 in 2014) is not the only tshechu held in this region, but it is the biggest and most important one. 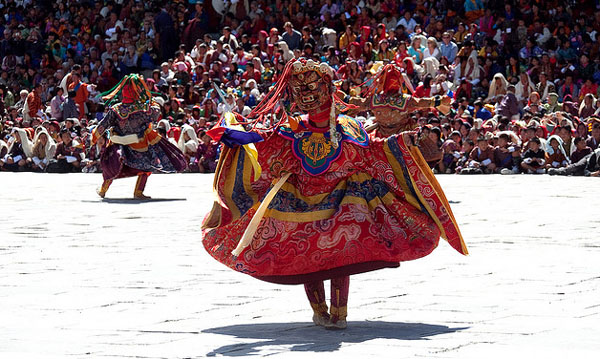 Punakha Tshechu and Drubchen: Punakha, in western Bhutan, is the winter home of the Je Khenpo, the chief abbot of Bhutan, and it has huge historical significance because it was from here that Zhabdrung Ngawang Namgyel in 17th century unified Bhutan as a nation state by putting an end to the frequent attacks by invaders from Tibet. Punakha Drubchen (March 6-10 in 2014) was initiated to commemorate his triumph which went on to become the annual festival known as Punakha Dzongkhag. This festival recreates through dances the epic battle that defeated the Tibetans. Another annual festival, the Punakha Tshechu (March 11-13 in 2014), was launched in 2005 as well.

Nimalung Tshechu: It is held in the Nimalung Lhakhang at Chumey in Bumthang of central Bhutan. In 2014, this festival will be held from June 5 to June 7. The Lhakhang (monastery) has a magnificent statue of Guru Rimpoche and is richly decorated with exotic Nyingmapa and Drukpa murals. A 9 m x 12 m thongdrol (gigantic scroll painting) of Guru Rimpoche is exhibited during the festival.

Sakteng Festival: This festival is held in Sakten valley (Trashigang Dzongkhag) in eastern Bhutan, a region at an altitude of 3000 m and inhabited by the semi-nomadic Brokpas. It is held for three days at the Sakten Lhakhang. The highlights of the Sakten festival are the yak dance and the Ache Lhamo dance which are unique to the Brokpa culture.

The above are but a few of the score and more festivals held in Bhutan every year. Undoubtedly, they are great attractions for tourists who get to have a colorful glimpse at the rich history and traditions of the small but beautiful country Bhutan.