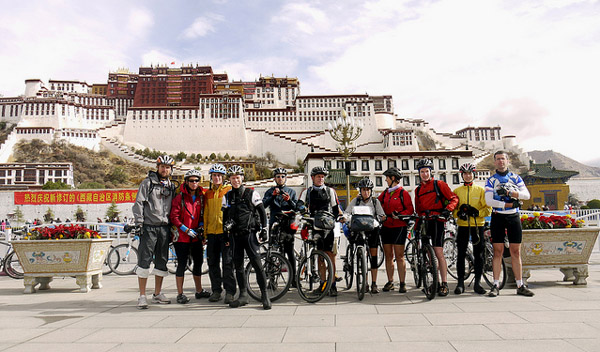 It’s not only hiking that’s so much fun and adventure, cycling too can be as challenging, as spirited, and actually more of an adventure than even trekking. Besides, cycling long distance over high altitude terrain will surely require a fair bit determination and perseverance. Now, it’s not something tame we’re talking about here; it’s not about cycling through rolling hills and slightly inclined trails. No, we’re talking about something different, something that will test your mettle and make you a better man/woman, both physically and mentally. We’re talking about cycling from  Lhasa in Tibet to Kathmandu in Nepal.

The classic route goes across the lofty Tibetan plateau, through six high passes, and in the course of the ride, you’ll be meeting some really interesting folks and experiencing some of their lifestyle in their villages and towns, as also in their fields. You’ll be seeing many lovely monasteries and come across some rough and tough nomadic camps as well. It’s an adventure all right. At the same time, you’ll be taken good care of by your tour operator who will make sure that there’s a well-equipped back-up vehicle for support when needed along with a Sherpa team to help in the higher altitudes. You will probably be thankful for their company as well as any others’, for you’ll be cycling sometimes over vast areas that are really remote and practically uninhabited. 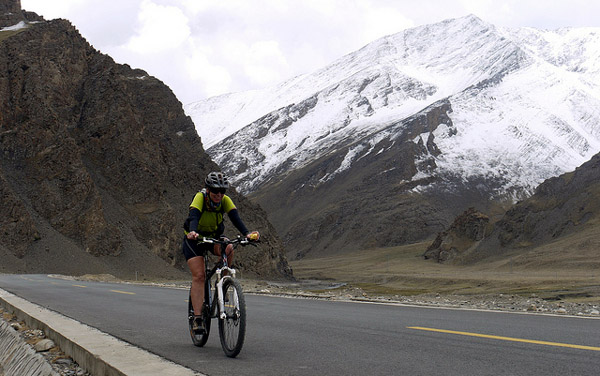 Your adventure begins in Kathmandu where you go through the formalities of getting a Chinese visa. While this is under process, you’ll have some time to explore the pleasures of this famed city and its seven world heritage monuments. You’ll then take a flight to Gongar Airport; it’s no ordinary flight, you’ll be flying across the main Himalayan range, and what a sight that is! From Gongar you drive for two hours to reach Lhasa where you hunker down for a couple of days to get used to the altitude as also to discover its beautiful monuments which include the grand Potala Palace, former residence of the Dalai Lamas, Norbulinoka, their summer palace, Jokhang Temple, Sera Monastery, etc.

After having had your fill, and now duly acclimatized, you start your cycling tour. The first day you’ll be cycling some 80 km along the Tsangpo River to the base of the Kamba Pass (3,700 m) where you’ll be glad to find everything arranged for a comfortable night. The next day, you cycle 55 km uphill along a tarred road, till you reach the Kamba Pass (4,794 m), where rows and rows of fluttering prayer flags greet you. You’ll want to stop for a while to get your breath and get an eyeful of the magnificent view before going downhill some 300 meters. Soon you’ll be cycling easily alongside Lake Yamdrok and finally call it a day at its far side where camp is set up for the night.

You’ll have slept well of course, all that going up and down! Anyway, that’s just the beginning. Now, the next day you cycle for another 54 km on the Friendship Highway, initially smooth, then graveled, and through a ravine before coming to the foot of the Karo Pass (4,750 m); where you camp for the night. The next morning, you got to start real early as you will be cycling all the way up to the Karo Pass (5,010 m). However, you’ll get to rest well in a hotel there. Come the dawn, and after a hearty breakfast, you take off on a long cycling day covering some 94 kilometers. First, you reach Gyantse, where you take time off to look around the Gyantse Dzong, a 14th century fort, and the Gyantse Kumbum, a large stupa with a golden dome inside the Pelkor Choede Monastery. Having seen these, you carry on cycling along the highway to Shigatse (3,860 m), where some great carpets are made. 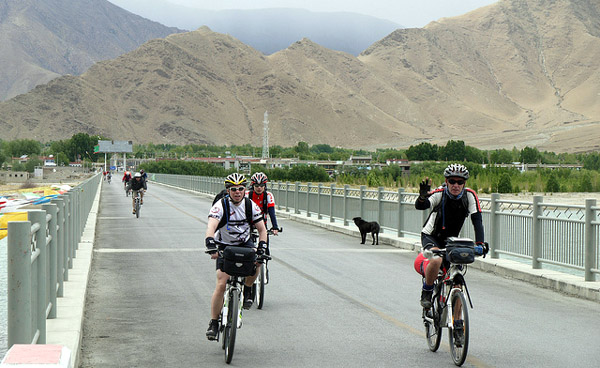 Having had a good night’s rest in a hotel, you’ll surely be feeling bright and preppy in the morning, with color in your cheeks. Now you leave Shigatse and cycle over two more passes, but these at much lower altitudes. You’ll be crossing some nice little villages on the way and pass the Gyancheng Monastery before camping. You’ll have covered a distance of about 75 km today and you’ll be spending the night in a cosy enough tent this time. Sleep well because the next day is a long day again. You will be cycling some 95 km, but it will be mostly through charming valleys before you reach Tso-La pass (4,520 m). It’s a nice spot to have lunch and take a breather before heading towards Lhatse where you can take a dip in one of the hot springs nearby.

The next few days, you’ll be cycling for about 70 km a day, and seeing the fantastic canyon of Gyatso-La pass (5,220 m); going through Pelbar (a.k.a Shegar) town; riding around 42 hairpin bends; climbing up to Pang Pass (5,150 m); going downhill from there to Rongbuk Valley (4,200 m); and nearing Everest Base Camp, something you will certainly be excited about, right? At Rongbuk Monastery, you’ll be greeted by the magnificent sight of Mount Everest (8,848 m). It’s such a great place that you’ll be spending a whole two days here getting to know Everest up close. Really up close! 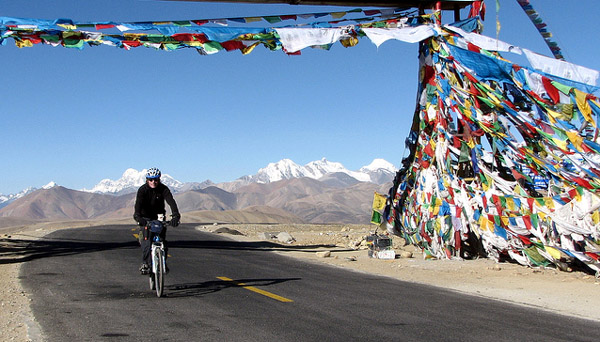 However, you are not going to climb it, not this time at least, and so say your good byes to the tallest peak in the world and head down a bumpy road before cutting across a still bumpier trail over a canyon and into Tingri (4,340 m). The next day’s highlight on the trail is the Lalung Pass (4,990 m) which you reach after a flat ride over some 50 kilometers. Spend the night in a tent. The next morning, you start off for the Thang Pass (5,050 m), reaching which, you go downhill next— a ‘freewheeling’ experience if ever there was one— right to the Nepal border. You’ll pass some beautiful scenery along the way as you cycle through Nyalam and on to Zhangmu (2,300 m). Sleep well this night, your last in Tibet for the time being.

The next day, you cycle through the Nepali customs and ride on to Kodari, from where the road, for about 50 km, goes gradually downhill but is pretty rough and rocky. By and by you reach Dolalghat and then start climbing again to Dhulikhel where you get to stay at a beautiful resort.  A fitting welcome to your return to Nepal! Now it’s only a matter of one more day. You cycle the last 35 km to Kathmandu passing Bhaktapur on the way, a leisurely end to a hectic but exciting fortnight, certainly an adventure of a lifetime!