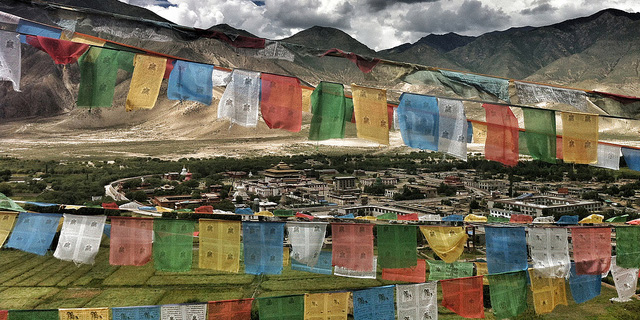 Tibet Autonomous Region has an area of over 1.2 million sq km and is located on the southwest frontier of the People’s Republic of China. With the average elevation of over 4,000m, Tibet is also known as ‘the roof of the world’. Tibet shares borders with Myanmar, India, Bhutan and Nepal. Its capital, Lhasa, contains two world heritage sites – the Potala Palace and Norbulingka, which were the residences of the Dalai Lama at one time. The Potala Palace is perched 130m above the Lhasa valley upon Marpo Ri hill. The interior space is in excess of 130,000 sq m. Lhasa also contains a number of other significant temples and monasteries, including Jokhang and Ramoche temples. Five kilometers away from Lhasa is Tibet’s largest monastery, the Drepung Monastery (literally ‘Rice Heap’ monastery), which is one of the ‘great three’ Gelugpa university monasteries in Tibet, the other two being Ganden and Sera.

Tibet has varied topography: the northern Tibet Plateau in the west which covers two-thirds of the total area in the Tibet Autonomous Region, the river valleys in the southern part of Tibet, and the eastern part of Tibet which is an area of deep gorges with a series of mountain ranges. The Himalayas to the south of the Tibetan Plateau stretches over a distance of 2400 kilometers. Major rivers of Tibet are the Yangtse, the Gyalmo Ngulchu, the Zachu, and the Yarlung Tsangpo. There are 1500 lakes of varied sizes of which 47 are over 100 sq km in size. Namtso or Lake Nam is located approximately 112 km from Lhasa. It lies at an elevation of 4,718 m and has a surface area of 1,870 square kilometers. It is the highest salt lake in the world. The fan shaped Yamdrok Lake is another large lake. It is over 72 km long and 621 sq km in area.

Tibet has a unique climate with thin air and low pressure and the temperature varies greatly between day and night. Valleys in the south of Tibet have warmer climate with great rainfall and the average temperature is about 8 °C while the north of Tibet has typical continental climate with average temperature drops below zero degree centigrade.  The whole year in Tibet can be divided into two different seasons; the dry season and the rainy season between May and September. The best time to visit Tibet is in the warmest seasons, June, July, August and early September. 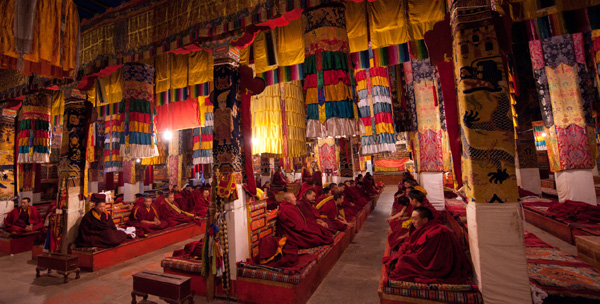 Money
The Chinese currency is called renminbi (RMB). The basic unit is Yuan. Ten Jiao make one Yuan; ten Fen makes one Jiao. Thus 100 Fen make one Yuan. Traveller’s cheques from most of the world’s leading banks and issuing agencies are acceptable in China, however it is only acceptable in banks instead of shopping centers.