In both the great and the not so great monasteries of Tibet, you’ll often find a lot of devotees prostrating themselves on the ground. The Tibetans call this chaktsal, and it is one of the most important ways in Tibetan Buddhism for people to display their devotion and dedication to the powerful gods and goddesses of the Buddhist pantheon. Chaktsal (prostration) is sometimes conducted continuously for hours at a time. Similarly, another essential factor of Tibetan Buddhism is the string of rosary beads that you’ll see people rotating on their fingers at all times of the day. These are made of 108 dried beads and each bead serves to mark off a prayer. In the same way, prayer wheels are another common factor of Tibetan Buddhism. These are filled with lengthy prayers written on paper and wound about the stem. Each revolution of the wheel means the recital of one prayer. Prayer flags, mani (prayer) stones, dorje (thunderbolt), dribu (bell), metak (lotus), and many other ritual symbols: these are all part and parcel of Tibetan Buddhism. In other word, it is undoubtedly a quite unique religion, and full of mystery and magic. 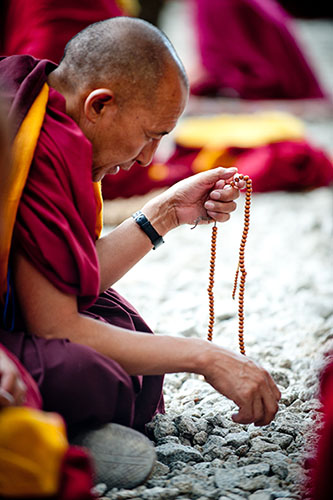 Buddhism was first introduced in Tibet during the reign of Songtsen Gampo due to the influence of his Nepali wife, Bhrikuti. It was, however, during the reign of King Trisong Deten that Buddhism began to be more firmly established, thereby starting the process of replacing the Bon religion hereto practiced in Tibet for centuries. It was during this time that Samye Monastery, the first Buddhist monastery, was built on the north bank of the Tsangpo River. This was where the Indian sage, Guru Rinpoche, is believed to have gained a great victory over the massed demons at Hepo Ri, to the east of Samye, thus paving the way for Buddhism to flourish. Later, the Indian abbot, Shantarakshita, ordained the first seven Tibetan monks in the monastery and scholars from India and China were invited to translate Buddhist manuscripts into the Tibetan language.

However, soon enough, the scholars were at loggerheads over the meaning of the texts, and this eventually had to be resolved through what is known as the Great Debate of Samye. At this point, it should perhaps be noted that all this took place more than 1200 years ago (early 790s). The major point of dispute was that while the Indian view emphasized scholarly study to achieve bodhisattvahood, the Chinese stressed on the practical method through Zen. The former view prevailed at the debate. Indeed, Buddhism’s march into Tibet is full of myth and legend, with different schools of Buddhist beliefs taking precedence at one time or another, thus further making complex an already complex religion.

Nyingmapa Order, known as the Old School, dates back to the eighth and ninth centuries, and was founded during Guru Rinpoche’s time at the Samye Monastery. This order did not get the opportunity to come into much prominence due to the decline of Buddhism as a whole in the century following its founding. However, it gained ascendency in the eleventh century again. During the fifth Dalai Lama’s time (1642), this order had a resurgence as the Dalai Lama had been born into the Nyingmpa family, and some more monasteries were built then. During the period of Buddhism’s decline (in the tenth century), many Tibetan monks journeyed to India and brought back with them new thoughts on the religion. Milarepa (1040-1123), the disciple of Marpa the translator (1012-93), was one such scholar. He established the Kagyupa Order, and Milarepa’ disciple, Gampopa (1079-1153) ensured its further development by building many monasteries. This order went to on have many different schools as well, including the more famous one known as Karmapa. 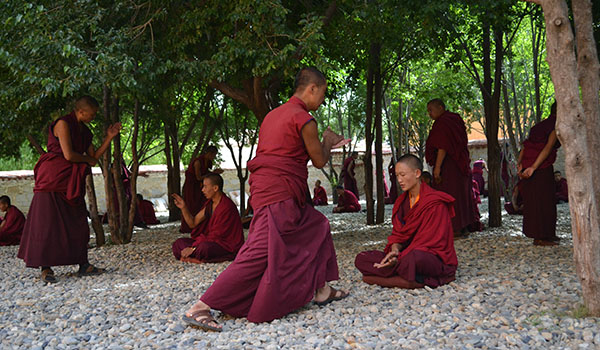 During the eleventh and twelfth centuries, efforts were renewed vigorously to study the texts and to translate them into Tibetan. One of the prominent scholars was Kunga Gyaltsen (1182-1251), also known as Sakya Pandita (‘scholar from Sakya’). He was later recognized as the manifestation of Jampeylyang (Manjushri), the Bodhisttva of Insight. The Sakypa Order he founded went on to become a politically powerful force, with his heir becoming the spiritual tutor of the mighty emperor Kublai Khan of Mongolia. One of the students who came to study at Sakya was Tsongkhapa (1357-1419) who later founded the Gelugpa Order. After much study and contemplation, he came to the conclusion that the monastic discipline was the right path to bodhisattvahood, and advocated a doctrine known as lamrim (the graduated path), a synthesis between the clerical and tantric sides of Tibetan Buddhism. In Tsongkhapa’s opinion, one should not advance to tantric practices without first undergoing clerical studies through monastic studies. He established monasteries at Ganden, Drepung, Sera, and Shigatse.

Tibetan Buddhism has undoubtedly been responsible for bestowing Tibet with much interesting history, and continues to do so. Religion is deep rooted, that’s for sure!