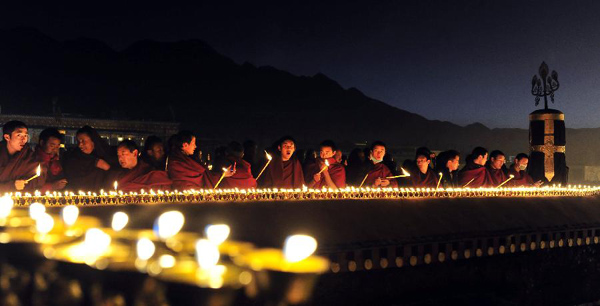 Monks light the butter-lamps in the Jokhang Temple in Lhasa during the annual Butter Lamp Festival. Image: Xinhua/Tao Xiyi

So you want to travel to Tibet? Of course you do. After all, Tibet travel is a much sought after desire of many travelers around the world today. There’s not much mystery left in the world, and even the last bastion of mysterious lands, Tibet, is undergoing rapid transformation every other day. Therefore, if you want to travel to Tibet, do it soon before it’s too late. Nepal is the preferred gateway to this land of mystery, and so you’ll find plenty of tour agencies offering a variety of Tibet tours. Many are synced with the timing of one or the other of Tibet’s numerous festivals, and that’s as good a way to plan your visit as any since you’ll then be gaining a better understanding of Tibetan culture. So, travel to Tibet and witness some pretty exotic festivals, some of which are described here.

Tsongkhapa Butter Lamp Festival (Ngachu Chenmo): It is celebrated on the 25th day of the 10th month of the Tibetan lunar calendar (November/December). Just to make it clear, Tibetan months are about six weeks behind those in the Gregorian calendar. Usually, the first month falls in February. Well, this festival is a glittering affair, with countless numbers of butter lamps being lit on rooftops of houses and monasteries. This part of Tibetan culture could be compared to Deepawali (Tihar) of Nepal, also called the festival of lights. Only thing is, butter isn’t used here, it’s just too expensive! Ngachu Chenmo is to commemorate the anniversary of the passing of the founder of the Gelugpa (Virtuous) order, Tsongkhapa (1357-1419). He was the first abbot of Ganden Monastery, which is 50 km away from Lhasa, and his red fortress-like mausoleum, known as Serkhang, is an impressive part of the monastery, as is its famous kora, a long circumambulation of the area. During the festival, religious dances (chams) are held here as well as in the other Gelugpa monasteries at Sera and Drepung. So, seems like a good time to travel to Tibet, don’t you think?

Paying homage to the Holy Mountain Festival (Choekhor Duechcen): Also known as Drukwa Tsezhi (‘June 4’), this festival is held on the 4th day of the 6th lunar month. It is to celebrate Gautam Buddha’s (Sakyamuni’s) first sermon to his disciples at Sarnath in India (near Varanasi) at the age of thirty five. A lot of juniper incense is burned as pilgrims climb the peak of Gephel Ri (Gambo Utse) that’s the backdrop to the Drepung Monastery. Pilgrims also make a beeline for the ridge from Pabonka to the Dode Valley where they do likewise. You’ll find a lot of families picnicking on the day. That’s what Tibetan culture is all about, combining religion with enjoyment.

Universal Prayers Festival (Zamling Chisang):  This is celebrated on the 15th day of the 5th lunar month to commemorate Padmasambhava’s (Guru Rinpoche’s) victory over masses of demons at the Hepo Ri peak, as also to remember the founding of the Samye Monastery, Tibet’s first monastery built some 1200 years ago. Actually, this marks the beginning of Buddhism’s triumphal march into the hereto Bon dominated region. You can take a bus from Lhasa to the monastery which should take you around three and a half hours. On this day, you’ll see plenty of juniper branches (sang) being burned on the hills near monasteries. Juniper is an important part of religious activities in Tibetan culture.

Harvest Festival (Ongkor): A festival of central Tibet, this falls on the first week of the eighth month of the Tibetan calendar. As the name suggests (Ongkor actually means, ‘looking around the fields’), it is celebrated to ensure a good harvest. Villages are naturally where this festival is celebrated with much gaiety. Horse riding and archery contests are the order of the day. A good time to see the sporting side of Tibetan culture is what we’ll say!

The above mentioned festivals are but a small number of the many colorful festivals of Tibet that make Tibetan culture so vibrant and alive. There’s a lot of religion involved, of course, but there are many that just have to do with celebrating the good life, and in many a case, important religious events in the country’s history make for good excuse to do so. If your plan is to travel to Tibet in the near future, do make it a point to make it in time to be a part of some of the festivals. You’ll not only have a pretty good time, and a lot of fantastic photos to boot, you’ll come out of the experience more knowledgeable about Tibetan culture, and maybe, even imbibed with some spirituality.