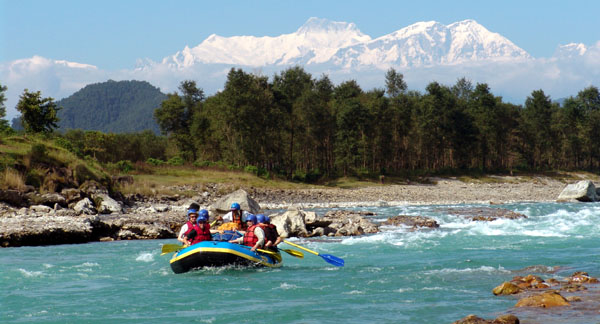 Once, an Irish lady exclaimed to me, “Look, this newspaper report says that load-shedding has been curtailed to only eight hours a day,” and then, in a tone fairly dripping with sarcasm, “Only eight hours!” Indeed, such is the state of affairs in the country today, and while locals have somehow got used to it, considering even eight hours as ‘only’, it must be a really unique experience for people of de developed nations, where a few hours of blackout would probably create a panic situation.

Ironically, Nepal is a country rich in water resource, with plenty of rivers originating in the mighty Himalayas. So rich, that studies have shown Nepal to have hydropower potential second to none in the world. Now, don’t ask why it hasn’t been utilized properly. Reasons are too many. Anyway, leaving this aside, the country’s intrepid tourism entrepreneurs have made good use of these rivers for another good purpose—white water rafting. Oh yes, rafting has been one of the country’s prime attractions for quite some time now. One could even say that, aside from climbing and trekking, rafting is the number three adventure activity for which the country is justly famous.

To recapitulate, Nepal’s rivers (the major ones being Kosi, Narayani, Gandaki, Karnali, and Mahakali) originate from the glaciers of the mighty Himalayas. Riding down the crashing waves and swirling rapids of these rushing mountain rivers in an inflatable rubber raft could be one experience that will stay in your memory forever. And, don’t worry, there’s plenty of rafting operators, most of them in and around the Thamel area, who have been in the business for at least a couple of decades, which means that they are very experienced, thus assuring you a safe ride.

Before you go white water rafting, you might want to know more about the technicalities. Well, first of all, there’s a grading system for the rivers, with Grade 1 being the most tranquil and Grade 6 being really hazardous, so much so, that you wouldn’t want to go rafting there. And, anyway, nobody’s going to take you either, because some rapids there are considered to be almost impossible to raft in. Generally, if you are in good physical shape and at home in water, you can go rafting on Grade 1 to Grade 3 rivers without any problem. If you have done this before, and are more confident, you could try out the higher graded rivers. 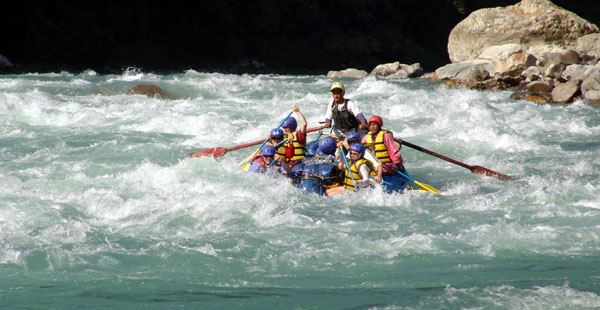 When would it be a good time to go white water rafting? September, October, November, and early December are good months for rafting. So too are March, April, May, and early June. However, keep in mind that rivers might be a bit rough during September–October and May–June, on account of the monsoon (June to August) around those months. The monsoons are when the river waters increase almost ten-fold. It is actually from mid-October to early December when most people go rafting. That’s when it’s most enjoyable. After December, it’s just too chilly. Of course, for the true blue adventurers, the other months could provide added thrills. Whatever month you choose to go rafting, remember that it is not advisable to go it alone, that is, there should always be at least two rafts so that they can help each other if need be.

Having said all this, let’s now get down to the well known rafting routes of Nepal. The most popular is the one that takes you down the Trishuli River from a place called Khudi to Bimal Nagar, a distance of some 38 kilometers. You get to Khudi via Besisahar (an eight hour drive from Kathmandu). The Trishuli River swells up considerably during the monsoon, otherwise it’s fairly placid. Rafting down the Kali Gandaki River is another popular route; you’ll get to drift through the world’s deepest gorge, the Kali Gandaki Gorge, and on the way, you will come across a number of cremation sites and burial mounds at the junctions of the river. By the way, you might like to know that this river comes down from the Dhaulagiri and Annapurna ranges. Similarly, the Marshyangdi River is one of the most exhilarating locations for white water rafting. It has steeper and more continuous stretch of rapids, which also makes it a fantastic river to kayak in. You can also have an excellent rafting experience down the Karnali River, the country’s longest and largest river, which originates from around Mount Kailash and the Kanziroba Himal glacier in Tibet.

The Bhote Kosi River near the Sino-Nepal border is another great site for white water rafting. The Arniko Highway runs along beside the river. It’s proximity to Kathmandu (a three hour drive) makes it a popular site for rafting. Rafting on the Sun Kosi River begins with a drive down to Dolalghat from the capital (about 3 h). Rafting here is quite a roller coaster ride, going as you will sometimes over calm waters, sometimes over wild stretches, and sometimes through high rock strewn passages. It’s a fairly long ride (about 120 km), and because it’s an unpredictable sort of river, it’s recommended for intermediate and advanced rafters. Rafting on the Seti River offers beautiful mountain views of the Manaslu and Annapurna regions, and since its waters are pretty warm, rafting in winter is not a problem here. Rafting on the Tamur River is another thrilling experience for the more proficient rafters who get to descend some 120 km over almost a hundred exciting rapids. The Tamur River originates from Kangchenjunga, the third highest peak in the world, and it is the sixth largest river in Nepal.

All in all, there certainly is something for everybody. It doesn’t matter if you are a beginner; there are quite a few routes that will ensure your safe enjoyment. Similarly, for the more experienced rafter, there are many challenging options. Whatever the case may be, you are assured of an experience of a lifetime, white water rafting on the wild mountain rivers of Nepal.