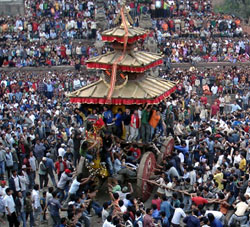 KATHMANDU, APR 10 – Bisket Jatra, one of the historically and culturally important festivals of Bhaktapur, began on Wednesday as per the tantric rituals, heralding the start of new Nepali year. The festival, which runs for nine days and eight nights, starts four days before the New Year day and runs after five days of the New Year. The festival began in the morning with traditional rituals by worshipping Bhairav Nath. The locals worshiped Bhairav as the Bhairav chariot was pulled from the five-story temple at Taumadhi in the afternoon after special worship by Taleju Naike Narendra Prasad Joshi.

A Khadga was placed in the chariot before the locals pulled it to Gahiti accompanied by traditional band music. The sword was submitted to the main priest of Taleju, after Bhairav and Betal puja was performed. The festival has been celebrated since the Lichchhabi period.
Considering the probable accident frequently occurring during the festival, security has been beefed up considerably to prevent any untoward incident this year. “We have deployed 1,400 personnel from the Nepal police and armed police force to provide protection to the locals,” said DSP Dilip Chaudhary, who confirmed the first day of the festival was observed peacefully.
Ghode Jatra celebrated Coinciding with Bisket Jatra this year, Ghode Jatra, another popular festival in Kathmandu, was celebrated at Tundikhel on Wednesday. On the occasion, Nepal Army cavalry performed an array of equestrian shows together with cultural programmes and athletics at the army parade ground. President Ram Baran Yadav gave away prizes to the winners of various events.