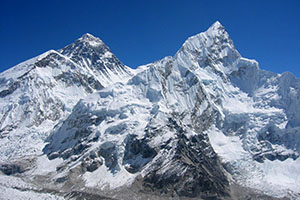 An avalanche swept the slopes of Mount Everest on Friday along a route used to ascend the world’s highest peak, killing at least six Nepalese guides and leaving nine more missing, officials said.

The Sherpa guides had gone early in the morning to fix the ropes for hundreds of climbers when the avalanche hit them just below Camp 2 around 630am local time (2am BST), said Nepal tourism ministry official Krishna Lamsal, speaking from the base camp and monitoring the rescue efforts.

Four bodies have been recovered and rescuers were digging two more out of the snow, he said. Nine more Sherpas are unaccounted for and believed to be buried, he said.

Hundreds of climbers, their guides and support guides had gathered at the base camp, gearing up for attempts to scale the 8,850-metre (29,035ft) peak early next month when weather conditions become favourable. They have been setting up their camps at higher altitudes with guides fixing routes and ropes on the slopes ahead of the ascent to the summit in May.

As soon as the avalanche hit, rescuers and fellow climbers rushed to help. A helicopter was also sent from Kathmandu.

Ang Tshering of the Nepal Mountaineering Association said that the area where the avalanche occurred is nicknamed the “popcorn field,” which is just below Camp 2 at 6,400m.

Nepal announced several steps this year to manage the flow of climbers, minimise congestion and speed up rescue operations on the mountain. The preparations included the dispatch of officials and security personnel to the base camp at 5,300m, where they would stay throughout the spring climbing season that ends in May.

More than 4,000 climbers have scaled the summit since 1953, when it was first conquered by New Zealander Edmund Hillary and Tenzing Norgay. Hundreds of others have died in the attempt.