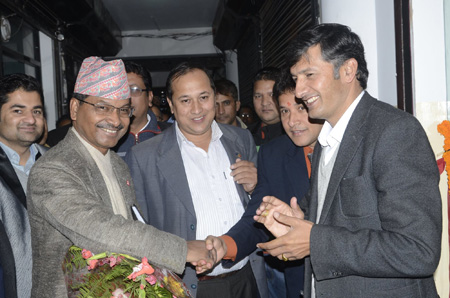 TAAN believes that this new counter will save time as trekking agencies and foreigners can get TIMS cards in Thamel – the tourist hotspot in Kathmandu Valley – itself. The counter will open from 7am to 6 in the evening, and from 10 am till 1 pm on public holidays. From now, foreign trekkers — both FITs and those traveling in groups — can get TIMS card from the counter.

Speaking this morning at the inauguration ceremony, Secretary at the Ministry of Culture – Tourism and Civil Aviation Suresh Man Shrestha said that new counter would facilitate foreign trekkers. “I would like to thank and congratulate TAAN for taking an initiative for improving the services,” Shrestha said, adding, “The government is a mere facilitator, private sector has to take necessary initiatives for tourism development.”

Secretary Shrestha also promised TAAN for all possible support to make TIMS more effective. He also said the government was mulling over introducing TIMS to other trekking areas of the country.

At present, TIMS has implemented on three major trekking areas of the country – Everest Region, Langtang Region and the Annapurna Region. Foreigners travelling in groups have to pay fee of US$ 10 each for TIMS card, while FITs need to pay $20 each. Similarly, FITs and group trekkers from SAARC countries are required to pay $6 and $3, respectively.

TAAN President Ramesh Prasad Dhamala said TAAN would work with the government to make TIMS more effective and transparent. He also requested Secretary Shrestha to implement TIMS in other trekking areas of the country.