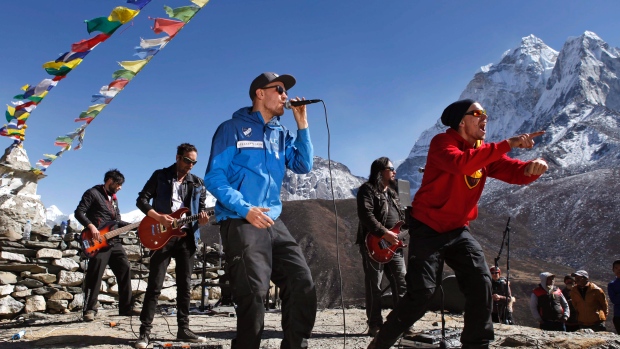 Kathmandu – Finnish rock band Ancara and sign-language rapper Signmark performed in the foothills of Mount Everest over the weekend to raise funds for a music school for children with hearing disabilities.

Dozens of music lovers cheered the musicians at Dingboche, a village at an altitude of 4,550 metres and a popular stop for trekkers and mountaineers heading to Everest and other peaks.

The performers flew to Lukla, the only airstrip in the Everest region, on Nov. 3 and trekked to the village, stopping along the way to acclimatize to the altitude.

They had hoped to perform at Everest base camp, where climbers prepare for summit attempts, but Nepalese authorities said concert permits could only be issued for areas with settlements.

Signmark, whose real name is Marko Vuo and who was born deaf, performs his raps in sign language, sometimes with others speaking the lyrics. He has performed in dozens of countries. No band had performed at such height, and they are set to possess their name in Guinness World Record.

Funds raised by the performances will support a music school in the Nepalese capital, Kathmandu.