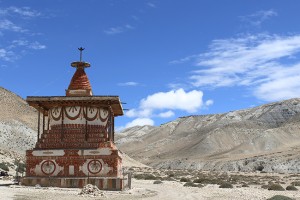 MUSTANG: Mustang District Development Committee has come up with five-year tourism master plan.
The master plan has motivated to increase inflow of domestic and foreign tourists to Mustang by two-fold. Program Officer at District Development Committee Kedar Singh Thapa informed that collaboration with Annapurna Conservation Project (ACAP), tourism entrepreneurs and tourism agencies as well as efforts through diplomatic channels are imperative to that end.The master plan efforts will be made to take inbound tourists to Kailash Mansarobar. Program Officer Thapa said that the main highway leading to Mansarobar is in a close distance from Bhodawasen district so the shortest route can be capitalized to take tourists to famous tourism site.The District Development Committee now has expanded road network up to Korala checkpoints. The DDC sources said that the arrangement to take the religious tourists coming to Muktinath – considered to be the center of faith of both Hindus and Buddhists – to Mansarobar will contribute to the promotion of tourism in the region.The record reveals that annually 200,000 domestic and foreign tourists visit Mustang – the main touristic destination along the Round Annapurna Trekking Route.